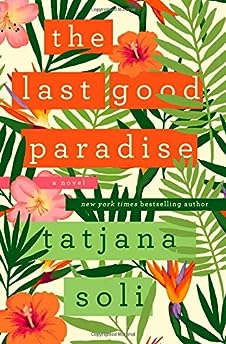 Tatjana Soli's The Last Good Paradise is a poignant novel of relationships and second chances.

"Passions ignite and plots are hatched as Soli's wise, piercing insights into human nature ground the novel and make it a rewarding read."

In her own words, here is Tatjana Soli's Book Notes music playlist for her novel The Last Good Paradise:

Some books lend themselves to music, both in the writing and in the reading. My first book, set in the 60's, had the built-in soundtrack that instantly brings that era to life. Writing my second book I found the story resistant to music; it was very much about silences and shutting the outside world away. The Last Good Paradise, on the other hand, is built around music. It is about artistic creation in its many manifestations: cooking, painting, performance art, but most especially, music. My fictional band Prospero and the lead singer Dex Cooper grew out of the rock & roll culture that began in the 70's and evolved through the 90's and beyond. Not only does Dex write a few songs during the course of the novel, but as a kind of rock philosopher king, he meditates on the meaning of music and fame in contemporary life. Not only did music inspire the creation of these characters, the characters themselves inspired specific music choices that I might not have picked before knowing them better.

These songs were some of my touchstones during the writing:

"November Rain" by Guns N' Roses
When NR came out, it marked that magic time when a band hits its peak, and I think every girl fell in love with Axl Rose as soon as he sang those first words, "When I look into your eyes…" If you watch the video, that song is like a time capsule of the excesses of the 80's. In my novel, Ann and her best friend Lorna have crushes on Axl Rose and Eddie Vedder when they meet a drunk Dex at the Troubadour.

"Rearviewmirror" by Pearl Jam
There is a world of difference between the aesthetics of the 80's and 90's rock scene, and the alternative, grunge of Pearl Jam compared with Guns N' Roses. Vedder is the good boy to Axl Rose's bad boy, although Vedder admits to wild antics in the band's early years like diving off the stage into the audience. The band evolved to promoting social and political issues, and I think that's the course that Dex is moving toward.

"Wild Horses" by The Rolling Stones
When Axl Rose inducted Elton John into the Rock & Roll Hall of Fame, he paid homage by saying that listening to "Benny and the Jets" made him want to be a performer. Dex grew up listening to the Stones. To him they were rock & roll. There's a concert on YouTube from 1975 at the LA Forum of the Stones performing "Wild Horses." It's real and raw, sloppy and sublime, miles apart from the slick arena concerts of today. I picture Dex as a kid out in the audience, knowing at that moment that music is what he wants to do in life.

"Baby Please Don't Go" by Muddy Waters
In the novel Dex fantasizes about disguising himself and going off to play the blues. This music is his root as it as was for the Stones. There is absolutely incredible footage of Muddy Waters performing at the Checkerboard Lounge in Chicago in 1981. The Stones are in the audience, and he invites them up. This is a TINY club, and they have to climb over people and on top of tables to reach the small stage. The improvised performance is glorious fun and seems like from a time long lost. The reason I mention the video in the last two songs is that watching it recalls a mood, a kind of innocent love of music, that Dex has even at his late stage of fame.

"Hoochie Coochie Man" by Muddy Waters
See above. Just because it is sooo good.

"Torna A Surriento" by Pavarotti
My first and happiest childhood memories are of Naples and Sorrento, Italy. That is my adopted homeland. Back in those days, you could not go into a corner grocery without the radio playing opera or love songs. This song never fails to make me smile, and I can see my character Richard in the privacy of his empty kitchen belting it out.

"Sweet Emotion" by Aerosmith
Love it or hate it, Aerosmith was the embodiment of the swaggering, macho rock persona during the 70's scene. The band heavily influenced scores of others even as they themselves evolved away from their hard-core image. Dex is a purist. He blames them for what he thinks are sell-out pop travesties like "Angel."

"Road to Nowhere" by The Talking Heads
There came a moment somewhere in the 80's when the whole bad-boy rock image just began to seem… stupid. My character Wende is a generation removed from Dex, but she grew up listening to the "oldies" her mom listened to while also starting into the new wave stuff like The Talking Heads, which Dex hates. I remember being in LA my first year out of college, not liking it at all, and when this came on the radio, I pulled over and turned up the volume (note: if you listen to this you have to crank the sound way up). It spoke directly to me: There's a city in my mind/come along and take the ride/it's all right, baby it's all right.

"Life During Wartime" and "Girlfriend is Better" by the Talking Heads
If you enjoyed the above.

"Colonial Mentality" by Fela Kuti
Dex has come to the dead-end of a certain kind of rock fame, and he is looking to reinvent himself. Fela Kuti, the Nigerian pioneer of Afrobeat, was equally known for his human rights activism in the 70's and 80's. Dex would have definitely been listening to him for inspiration. He would be a role model for Dex in both areas.

"Symphony of Drums" by Percussions des Iles Cook
This island music is infectious to listen to. The whole time I was imaging Dex incorporating it into his own music, like Kuti did with African music and jazz.

"Roxanne" by The Police
As a teenager I had a crush on Sting. Dex sings this song a capella to Ann on her birthday celebration, substituting her name. A dream come true for her. Even twelve years late, it's pretty good stuff.

1st Books essay by the author