Largehearted Boy: Book Notes - Amy Gustine "You Should Pity Us Instead"

Book Notes - Amy Gustine "You Should Pity Us Instead" 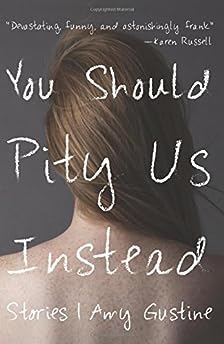 Amy Gustine's You Should Pity Us Instead is a outstanding debut story collection, one that draws stunning portraits of everyday people facing difficult predicaments.

"In this dazzling debut collection, Gustine shows tremendous range, empathy, and spark….Gustine’s language is uniformly remarkable for its clarity and forthrightness."

In her own words, here is Amy Gustine's Book Notes music playlist for her short story collection You Should Pity Us Instead:

I don't know that any art form can elicit emotion as reliably and strongly as songs. When I'm having trouble getting into the mind and heart of a character, I listen to a song that matches the mood of the story.

"Dear Father" by Colin Hay
You Should Pity Us Instead is mainly about the relationship between parents and children, and many stories deal with how it feels for one to lose the other—a beloved grandfather nears the end of his life, a daughter commits suicide, a mother drowns. Here's a song that speaks to the longing for our parents, the comfort of having pictures of them and the confusion over unresolvable anger that so often lingers long after their deaths.

"In My Solitude" (sung by Billie Holiday among others)
This jazz piece is from the 1930's. I imagine Caroline in "The River Warta" sitting in her spotless living room during The Great Depression, listening to it on the phonograph, thinking of her dead husband, Frederick.

"Remind Me Who I Am" by Jason Gray
This song reminds me of Lawan in "AKA Juan." A man with an uncertain identity, as the song and story titles both suggest, Lawan straddles two worlds, with two mothers, two families, two histories, two cultures. This is a lonely place to be. We're not made for it. We're made for belonging. For the rest of his life Lawan will work to shape an authentic identity and find somewhere he belongs. He's starting to look, though, and that's something.

"Welcome to the Cruel World" by Ben Harper
Harper's earthy voice can put you in a trance. A trance is the state I like best when I listen to music. I'm not a dancer; I'm a swayer. This song's slow tempo and sentiment—it's a cruel world, but try to enjoy your stay—could be the background tune for many of my stories.

"For a Dancer" by Jackson Browne
Apparently, Browne wrote this for a friend who died in a house fire. It's a favorite of mine about death because the song manages to exist in contradiction—simultaneously sad and joyful—and I'm a big fan of contradiction. I think it's the closest thing to truth we can access.

"Better Place To Be" by Harry Chapin
Several characters in You Should Pity Us Instead suffer from an abiding loneliness and this Chapin song is always the first one I think of when I think about loneliness—as a state, as a life, as an inescapable part of the human condition. I think it's the price we pay for being individuals. For having a mind that no one else can penetrate. Ultimately, we are trapped in there, alone.

"Where Will I Be?" by Graham Nash & David Crosby
This short song is a lamentation and has a lowing vocal quality. The lyrics make me think of Fredek and The Old Loaf in "Goldene Medene." Polish immigrants at Ellis Island, they are coming "home" to a strange land and have no idea who they'll be or what they'll do when they get there.

"Amazing Grace" as sung by Judy Collins
I grew up Catholic and certain songs bring back that feeling Jesus provoked in me when I was a child—the feeling of being loved perfectly, of being held in enormous, invisible, benevolent hands. In "You Should Pity Us Instead" Molly longs for that, but can't recapture the belief in it. She might listen to this song while lying on her musty futon, looking at the weeds in her yard she can't control. And whose heart doesn't soar at Collins' rendition?

"Arms Around My Life" By Janis Ian
A true prodigy, Ian was writing publishable songs in her early teens. She has wonderful range—from bell to a resonant, rich gravel. This song makes me think of Lavinia in "An Uncontaminated Soul" –the broken promises, shattered dreams, ache and loneliness that hides inside of her. That she longs to have set free. There's those cradling hands again—husband's mother's, father's, God's. Or Lavinia cradling one of h one of er 54 cats. And what it's like when she can't feel them. (Hint: This song is not on Spotify, but you can listen to it on Ian's website at JanisIan.com on her album Unreleased 2: Take No Prisoners.)

"Wars for Nothing" by Boggie
A soulful song about war from a Hungarian singer, Boglarka Csemer (known as "Boggie"), this would make a good soundtrack for "All the Sons of Cain," a story about the price of war, especially for women and children.

"Gun Shy" by 10,000 Maniacs
Here's a war song about the soldier from the point of view of his sister. It isn't so much a classic protest lyric as it is a personal narrative. You can feel the whole family situation here, the personalities, the tensions. Not surprisingly, I have a particular fondness for songs that tell a story.

"I Will Always Love You" by Whitney Houston
This one made the list because it's the song that Joanne and Tina sing about the boy they have a crush on in "Unattended." It's a song that professes great love, but the singer is leaving her lover. In "Unattended" most of the parents have gone AWOL and I imagine that this is how they feel—they will always love their kids, but they're leaving anyway. We like to perpetuate the myth that parental love is easy and complete. In truth it's often hard and fragmentary. Sometimes it demands sacrifice that people aren't willing or able to give. Sometimes it completely fails.

"Loves Me Like A Rock" by Paul Simon
The antithesis of ambiguity and difficulty, this song is about mother-love being the strongest thing that exists. It doesn't change. It can't be worn down. It's always there to sit on, lean on, stand on. I think of Cory in "Coyote" when I hear this song. She loves her boy like a rock, and that kind of love can drive you a little (or a lot) crazy.

"Skyline Pigeon" by Elton John (Harpsichord Version)
I imagine Sarah singing this song to Bea during their daily "song time" in "Half-Life." There's a great mixture of longing, of freedom and of being trapped in this song. The harpsichord version is the best. It's that tinkling sound —it reminds me of those silver triangles they give you to play in elementary school music class. There's a fantastic thing the song does by being both very adult and still invoking a feeling of innocence, by being both melancholy and hopeful, which maybe is the thing birds can pull off that the rest of us admire. Their delicacy is what allows them to fly, and their delicacy is what makes them terribly vulnerable. That's how Sarah is: strong and vulnerable. There are so many lines in the song that seem perfectly suited for her. That her eyes are like mirrors of the world outside, "thinking of the way the wind can turn the tide," and flying "away towards the dreams you've left so very far behind." Sarah has to go into the future to find the dreams she lost when she lost her mother. She longs for a family, and the only way she is going to get one is to create her own. In a sense, she has no past, but she has a future. That's why I put this story at the end of You Should Pity Us Instead—because having a future is hopeful and I wanted to end the collection on possibility.

Amy Gustine and You Should Pity Us Instead links:

Publishers Weekly interview with the author