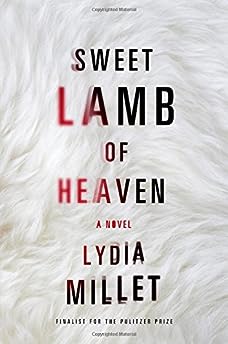 "A peculiar, stirring thriller. . . . Millet has a knack for planting plainspoken, world-weary narrators in otherworldly circumstances, and Anna is one of her sharpest, most intriguingly philosophical creations."

In her own words, here is Lydia Millet's Book Notes music playlist for her novel Sweet Lamb of Heaven:

Sweet Lamb of Heaven tells of a woman who hears a constant stream of talk and noise and music when her daughter is an infant. A few years later, when the voice has ceased, she leaves her husband and takes their child with her; most of the story occurs after he decides he needs them for political purposes and starts to hunt them down. I've assigned each chapter a song, below, either to reflect certain moods or moments, or sometimes because the song is explicitly mentioned or implicitly alluded to in the text.

Chapter 1. "This Land Is Your Land," Woody Guthrie. No matter how many campfires it's been sung beside, it can still make me tear up. I'm not ashamed. This is partly a book about who owns the country, so Guthrie's Wobblyish old tune is on the money. Mentioned on page 25.

Chapter 2. "Romance in Durango," Bob Dylan. Hardcore Dylan fans often dismiss the album (Desire) containing this track, but I'm sentimental as hell so its sometimes hokey lyrics and openly emotive melodies are right up my alley. "The way is long but the end is near... the face of God will appear." Invoked vaguely on page 45.

Chapter 3. "Lay My Love," by John Cale and Brian Eno, from their excellent collaboration Wrong Way Up, which is rumored to have made them angry at each other. (I'm still annoyed I can't bring up the album on Spotify.) Every song on the album is great.

Chapter 4. "Lili Marlene" sung by Marlene Dietrich or Vera Lynn, though I prefer the Marlene Dietrich version in German (she sang it first in German and later in English to entertain U.S. troops). This World War II love song was beloved by soldiers on both sides of the conflict and is sometimes referred to as the most popular war song ever written. Goebbels didn't like it much.

Chapter 5. "Far From Any Road," The Handsome Family. My children are sick of hearing the doleful music of the Handsome Family issue from my music player in the kitchen. This particular track made the big time as the theme music for the first season of "True Detective," over a moody montage that, with the music, was the best thing about the show by far.

Chapter 7. "Ride a White Horse," Goldfrapp. There's a model who has a walk-on in this chapter and the Goldfrapp is for her.

Chapter 8. "Hate Is the New Love," by the Mekons. Because I'm not capable of putting together a soundtrack without the Mekons. "Underneath all this/The only thing that matters is/What and where you were born/And how well you use it and conceal it/ Cause there's no peace/On this terrible shore/Every day is a battle/How we still love the war."

Chapter 9. "Lake of Fire," Nirvana cover of Meat Puppets song. The original's good too, but there's something about Kurt Cobain's restrained, unplugged delivery that rings more sinister. "Where do bad folks go when they die/They don't go to Heaven where the angels fly."

Chapter 10. "Skye Boat Song," traditional, mentioned on page 229. "Carry the lad that was born to be king/Over the sea to Skye." Scottish song often sung as a lullaby. As the book has very little to do with Bonnie Prince Charlie or the Jacobite succession, this suits the final chapter best if you forget the historical context.