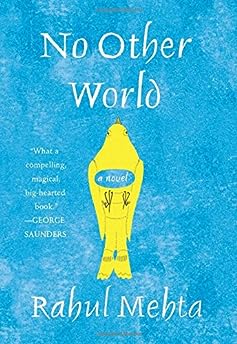 Rahul Mehta's compassionate debut novel No Other World is a poignant debut.

In his own words, here is Rahul Mehta's Book Notes music playlist for his debut novel No Other World:

A reviewer, in an otherwise very positive review of my short story collection Quarantine, criticized me for often dropping songs into scenes, suggesting it was a lazy shortcut for creating mood. I can't help it. When writing, I do tend to think cinematically: If this were a movie, what song would be playing in this scene? Looking over my new novel, No Other World, and noticing how many songs are referenced, I realize I perhaps have not learned my lesson. Briefly, the novel—part gay coming-of-age story, part family saga— focuses on an Indian immigrant family during the '80s and '90s and moves back and forth between rural America and small-town India.

"Choli Ke Peeche (remix)," Bally Sagoo
This song plays an important role in one of No Other World's pivotal scenes. In fact, I had originally included lyrics as an epigraph for the novel, but then I removed it because I worried that it distracted from the other epigraph, the stunning poem "Within This Tree" by Jane Hirshfield. The song comes from a Bollywood movie. In the movie, a beautiful woman, played by Madhuri Dixit, is being taunted by some other women in her village. The village women call to her, "What's beneath your blouse? What's underneath your veil?" and the woman responds, to their surprise, "My heart." The song resonated with me. For Pooja, a teenage member of India's transgender hijra community, clothing is a big part of how she is able to construct her female public identity, but, like many hijras, she is subject to constant harassment and taunts about what is under her skirt. For Pooja, it is powerful to be able to say that what is under her blouse, her veil, her skirt, is her heart.

"Aap Jaisa Koi," Nazia Hassan
In the novel, it is Preeti, older sister of the main protagonist Kiran, who brings a cassette tape of a Bollywood disco song to her third-grade class when she is asked to give a presentation on India, and it is she who shrinks upon hearing the giggles and snickers of her classmates who don't know how else to respond to this "strange" music. In real life, I was the one who played "Aap Jaisa Koi" for my class in my public school in West Virginia. In retrospect, I should have known I'd be laughed at. I had not yet mastered the art of code switching. Later, I'd learn how to leave my brown at home. Later, I'd learn how to butch it up in public, as a matter of survival. I didn't know any of this yet. At this time all I knew is that this was my favorite disco song, my personal soundtrack for dancing around my bedroom and pretending I was Zeenat Aman, and I didn't see any reason to hide that.

"Tom Sawyer," Rush
An eight-year-old Kiran is pulled into the orbit of a dangerous older boy, Shawn, who has a Rush poster on his wall. Ah, dangerous boys. As a kid growing up in West Virginia, I loved this song. Or did I love the dangerous boys who loved the song? Probably a little of both.

"The Kiss," The Cure
A teenage Kiran has a Cure poster on his wall. Many misfits of my generation—queer and otherwise—felt drawn to the androgynous Robert Smith. The Cure had some big hits, but it's the dark, dissonant, brooding work I always loved most.

"I Wanna Be Loved By You," Marilyn Monroe
The other poster on teenage Kiran's bedroom wall is the iconic billowing-skirt still of Marilyn Monroe from The Seven Year Itch. "I Wanna Be Loved By You" is from Some Like It Hot but it feels appropriate. Monroe plays the song light and playful, but there is a real longing at its core. It is scary to be vulnerable; it is easier to cover one's desire in a little shtick and camp. A few years later in the novel, it is Marilyn Monroe's face on the postage stamp that is affixed to the coming out letter Kiran sends his parents to tell them he is gay.

"Go or Go Ahead," Rufus Wainwright
This is the only song in the playlist that doesn't come from the novel's content. I always listen to music when I'm writing. Rufus Wainwright's greatest hits compilation, Vibrate, was on repeat when I was doing a big rewrite the summer of 2015 when I was living in Moab, Utah. I can't listen to that album now without thinking about the characters and the world of the novel.

"Maria (Pablo Flores Spanglish Radio Edit)," Ricky Martin
Ricky Martin performed this song at the Miss World Pageant in 1997 when Miss India, Diana Hayden, took the crown. Transgender Pooja looks to Diana Hayden as the model of feminine beauty to which she aspires. The crowning of Diana Hayden was a big deal in India and ushered in an era of Indian success in the world pageant circuit; the pageant played over and over on Indian television. In the novel, Pooja obsessively watches every rebroadcast, looking for clues about how to be.

"Turn, Turn, Turn / To Everything There Is a Season," Judy Collins
In the novel, this is sung by the Greek goddess Diana of the Hunt. To avoid spoilers, I won't say more. But this song is also appropriate because the cyclical nature of life is a recurring theme in the novel.

"Dil Kya Kare," Kishore Kumar
To me, this classic Bollywood song from the 1970s is a straightforwardly sentimental love song. Nishit, Kiran's father and the somewhat inert patriarch of this Indian immigrant family, is whistling this song in the novel's final scene. A lot has happened and the fate of the characters and their relationships with each other is unclear. But Nishit's faith in the love he has for his family is pure. He has hope.

Rahul Mehta and No Other World links: