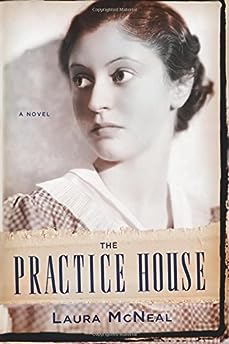 Laura McNeal's The Practice House is a compelling historical novel.

Kirkus Reviews wrote of the book:

In her own words, here is Laura McNeal's Book Notes music playlist for her novel The Practice House:

The Practice House is an actual building that was constructed in Fallbrook, California in the 1930s to help teach high school girls what parents feared was a dying art: homemaking. The title of the novel also refers to every house the female characters live in as they try to obtain and keep their own homes and families--as they try to find and make their places in the world.

"Leaving of Liverpool" by The Pogues and Dan Zanes

When I started writing The Practice House 15 years ago, I was still singing to our boys at bedtime, the three of us in their shared bed lit only by a slice of light from the hall on a quilt my grandmother had made. I was drawn to cheerfully mournful ballads that I didn't realize were Irish drinking songs (one of those boys is in college now so perhaps the songs are coming in handy). I especially loved "Leaving of Liverpool" because of the way certain syllables have extra notes, drawing the pain up and out of you like a skipping stone. The Pogues do a zealous pub version, but the one that's like a brave homesick smile is by Dan Zanes.

So-o fare thee we-ell, my-y own true love
When I return united we will be
It's not the leaving of Liverpool
That grie-ieves me
But my darling when I think of thee.

Since my main character, Aldine McKenna, leaves Scotland for America in the 1930's, I initially gave her this song. When I pictured her singing it in an attic room in Kansas to 17-year-old Clarence Price, I always saw the quilt in half-darkness over my knees and my little boys' feet.

Because a book doesn't actually play the song for a reader, I needed lyrics that would help tell the story, not just a melody that would break your heart. I finally replaced "Leaving of Liverpool" with the darkly comic "Brian O'Linn," a ballad about making do when you have nothing, one with many verses like this:

Now Brian O'Linn to his house had no door
He'd the sky for a roof and the bog for a floor
He'd a way to jump out and a way to swim in
"Tis a fine habitation," says Brian O'Linn

That seemed right for a Scottish girl to sing when she's stranded in Dust Bowl Kansas, teaching in a one-room schoolhouse and living with a family that can't really afford to keep her. Aldine sings in a sweet soprano brogue, but I confess that my fantasy performance features Tom Waits and a piano that's been sitting in a barn for about a century.

My husband and I were married in Alloway, Scotland for lots of reasons, but principally because I wanted (impossibly) to be married in a novel by Thomas Hardy and to live ever after in the 19th century. This was 1993 BI (Before Internet), so we couldn't preview the village, the church, the vicar, or the hotel for its 19th century credentials until we arrived two days before the ceremony. This led to a lot of amusing and fateful surprises, such as the music the hotel manager played on the sound system during our wedding dinner, which was one album after another by his favorite Scottish rock band, Runrig. During the pudding course, Runrig belted out "Loch Lomond," which is normally reverent and soulful, but this was a live version, so when a million passionate Scots joined in on the chorus and the drums kicked in, it was like "Ruby Tuesday" crossed with the Star-Spangled Banner. I fell completely in love with Scotland, Runrig, and "Loch Lomond," and when I needed a song for homesick Aldine to sing a capella for the Price family on one of her first nights in Dorland, Kansas, causing some to fall in love with her and some to set their hearts against her, it could only be this one:

Oh, ye'll tak' the high road, and I'll tak' the low road
And I'll be in Scotland before ye
But trouble it is there, and many hearts are sore
On the bonnie, bonnie banks o' Loch Lomond.

"O, for the Wings of a Dove" by Master Ernest Lough

An English choirboy named Ernest Lough became famous in 1927 for his gramophone rendition of Mendelssohn's prayer, which sold 316,000 copies in six months. People stood in long lines outside the Fleet Street, London, church where Lough sang on Sundays, and sometimes stood on their seats to see him:

O for the wings, for the wings of a dove!
Far away, far away would I rove!
In the wilderness build me a nest,
and remain there forever at rest.

Every time I hear any line of this song, which is so full of desperation and need, the world stops spinning for me. It's the kind of prayer that seems impossible to ignore, a form of communication that would pierce any heart. Aldine's performance of the song prompts someone to love her in a way that will always make her uneasy, and which gives her a secret she never tells. It also buys her a ticket to a place she hopes, correctly and incorrectly, will provide shelter and a nest—Dustbowl Kansas.

"We'll Go No More A-Roving" by Not Dark Yet

When I was an English teacher, I used to make my students choose a poem to memorize, and among the choices was Lord Byron's "We'll Go No More A-Roving." The canny students always saw immediately that it was the shortest poem with the simplest refrain, so they thought they were getting off lightly, but it's the kind of poem that once memorized can haunt you forever:

The sword outwears the sheath
The soul outwears out the breast
And the heart must pause to breathe
And love itself have rest.

Though the night was made for loving
And the day returns too soon
We'll go no more a-roving
By the light of the moon.

Clarence Price, who falls hopelessly in love with Aldine on the night of her arrival, has a better memory than most, but he's too besotted to recite the poem, and she has to finish it for him in the classroom. The words have been set to music and recorded by many people, including Joan Baez, but my favorite version is by a young Norwegian band call Not Dark Yet. They add just the right amount of spooky sorrow and youthfulness to the words—you can tell they're not old enough to really feel the pain of what they're saying, but the ache of nostalgia—the foregone conclusion of it—is still there in every word.

"Ain't We Got Fun" by Peggy Lee

I love music from the 1920s and 30s--the brittle, carefree, dance-y rhythms, the gigantic bands in the background, the scratchy recordings that are like beautiful furniture in a ruined, abandoned house. Perhaps the greatest expression of the era lies in the bitter cheer of "Ain't We Got Fun." Peggy Lee (who recorded the song much later, in 1959) can almost make you think she doesn't care at all when she sings:

But when you read the lines, when you can't hear her playful, chipper voice, there's nothing but sadness and reproach. Both things—the sadness and the cheer—are present in every story I read about Depression-era housewives, farmers, and children when I was writing The Practice House. People are never more lovable than when they're trying to put a good face on things for their families, when they're trying to save something or someone they deserve to save.