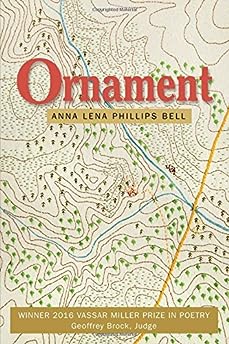 The Los Angeles Review wrote of the book:

"As the collection’s title suggests, Phillips Bell’s poems are intensely lyrical and elaborately patterned, bringing to mind the music of a dulcimer. Indeed, regional music is integral to the collection: throughout the book, the author invokes and directly references forms including Appalachian folksongs, bluegrass tunes, gospel music, and church hymns."

In her own words, here is Anna Lena Phillips Bell's Book Notes music playlist for her poetry collection Ornament:

When I was first working on Ornament, I listened over and over to a record by banjo player Virgil Anderson, On the Tennessee Line. Often I didn't bother to flip it as I wrote, just moved the needle back to the first track. Anderson, I'd learned, lived across a swinging bridge on the Little South Fork of the Cumberland River in Kentucky. A lot of the tunes he played are traditional oldtime Appalachian ones, but he has a long-lined, winding-around autobiographical one called "Green Ford Blues," whose chorus I chose as the epigraph for my book: "Come on, pretty baby, / Just say you'll be mine. / We'll do that Tennessee shuffle on the old state line."

I listened so hard to that record because I was thinking so hard about state lines, about loving a place and needing to leave it. A lot of the poems in Ornament come out of the piedmont landscape I was raised in—and many of them are in conversation with music that was formed in and by the southern piedmont and Appalachia. Some pay thanks to a lot of songs at once, and sometimes a poem cozies up with lines from a single tune. At the back of the book, I included a list of songs and tunes that, directly or obliquely, show up in the poems.

These are a few of them.

1. "The Carolina Lady" – Dillard Chandler
This ballad has in it: the name of my home state and my adopted state; a lady "most handsome and gay"; two brothers; a coach and horses; a fan; and lions. Also notable, as ballads go, is that the lady does not get murdered, but gains a lover. As such it's a model for the things a poem of the present-day Carolinas might contain—uncanny places, fabulous conveyances, stylish accessories, wild animals, and strong female-identified characters—ones who have minds of their own, and who have a good time.

2. "Make Me a Pallet on Your Floor" – Mississippi John Hurt
I heard this song when I was fourteen, around when I got my first guitar. I knew I had heard it before, but I couldn't remember where. It turns out my dad had a cassette tape of it when I was three or four, given to him by a grad-school professor. Oh, yeah, that's Mississippi John Hurt, he said. (If he'd had a record instead of a cassette, I likely would have recognized the cover, might not ever have lost knowing it in the first place.) The warmth and genius of Hurt's singing and playing sounded like the first, best music I'd ever heard, and still do.

3. "Bonaparte's Retreat" – Hobart Smith
I think of this tune, along with the gentler "Bonaparte Crossing the Rhine," as a companion to one of the sonnets in Ornament. Smith's version is instrumental, thankfully—I don't love the set of lyrics that are sometimes attached to "Bonaparte's Retreat." They're the kind that are written about the tune itself, that suggest the music alone can't be enough—it has to be also a nostalgic and thus likely suspect take on how the music, and the living, once was. "And I kissed her while the fiddles played the Bonaparte's Retreat." Don't tell me about it, just play the tune for itself, and kiss the person, provided they're willing, or part with them, as the case may be.

4. "Marching Jaybird" – Etta Baker and Cora Phillips
Etta Baker's banjo playing does what I hope a few of my poems do. Listen to the jaybird marching through this tune: he's in there, but he's not captive. She's being with him and we get to be there with the both of them. And it sounds so good.

5. "Candy Girl" – Uncle Bunt Stephens
I learned this tune first from my friend Emily. She sings "Candy girl, candy girl, give me back my five dollars." It seemed right for a poem about marmalade making.

6. "Waltzing On Top of the World" – Jim Reeves
This song's kind of a goofy one, but Jim Reeves could sell it. Also, the lyrics are, at least approximately, in amphibrachs, which I love. I wanted to write a response in the vein of "The Nymph's Reply to the Shepherd," &c. Maybe because "Waltzing On Top of the World" is more transparently silly than that passionate shepherd was, I didn't have to hit back quite so hard.

7. "Trials, Troubles, Tribulations" – E.C. and Orna Ball
I cannot imagine a sweeter pair of voices to sing about the apocalypse than Estil and Orna Ball. The poem I wrote thinking about this song, "When the Fire Comes Down from Heaven," pictures a somewhat less fiery version of things.

8. "Whole Heap of Little Horses" – Texas Gladden
"When you wake / get some cake / and ride them pretty little horses." Sounds all right to me. The final poem in Ornament was originally called "She Makes Her Own Lullabye"—now it's just called "Hush." But the old title holds: we have to make do for ourselves sometimes, with the help of what's around. If no cake or horses are available, maybe katydids will be.

9. "Say Darling Say" – Tommy Jarrell
I love to yell the "I'd get drunk and lay in the shade" line, and also to sing the sweet refrain of "Say, darling, say."

WHQR interview with the author