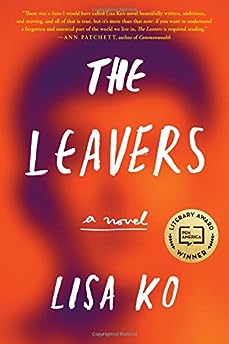 Longlisted for the 2017 National Book Award for Fiction and winner of the 2016 PEN/Bellwether Award for Socially Engaged Fiction, Lisa Ko's debut novel The Leavers is a powerful and timely look at the immigrant experience, and one of the year's most profound works of fiction.

"This wrenching and all-too-topical debut novel picks up the life of an 11-year-old American-born boy on the day his mother, an undocumented Chinese immigrant, disappears . . . Ko uses the voices of both the boy and his birth mother to tell a story that unfolds in graceful, realistic fashion and defies expectations."

In her own words, here is Lisa Ko's Book Notes music playlist for her debut novel The Leavers:

Music has been such a huge part of my life, my writing, and The Leavers. Deming, one of the novel's main characters, is a musician. Long before I was a novelist, back when cassette was king, I was a dedicated mixtape maker, plotting out playlists like I'd later plot out scenes and narrative arcs. Now, when writing, I'll sometimes listen to music to help access a particular time or emotion.

The Only Ones, "Another Girl, Another Planet"

Eleven-year-old Deming Guo's mother Polly, a Chinese immigrant, goes to work one day and never comes home. Left with no one to take care of him, he is adopted by a white couple who move him from the Bronx to a small town called Ridgeborough, where he's the only Asian person. He's bereft, confused, missing his mom, and wondering where she is. Meanwhile, his adoptive parents change his name to Daniel Wilkinson and try to make him over into a different boy in order to help him "fit in." To cope with this dislocation, Deming tries to see his new town through an anthropological lens, studying the inhabitants like they study him. He calls it Planet Ridgeborough and attempts to convince himself that he'll only be a temporary resident.

Part One of The Leavers is called "Another Boy, Another Planet," which is also a nod to one of my favorite one-hit wonders and that 1970s British new wave exuberance I grew up loving. This 2:50-minute anthem is all power drums and flying guitar solos and nasally vocals. I used to listen to it in junior high and wish I was in a band, or that I'd been born ten years earlier.

A decade after his mom disappears, Deming, who now goes by Daniel, is 21 and moves back to New York City to be the guitarist in a friend's band. At the start of chapter 2, he's about to play a show and drinking too much to ease his nerves: "He wandered out to the rooftop, the city spread wide like an offering, though he knew better than to admit he was impressed by the view." Daniel's a born-and-bred city kid, but at this party he's surrounded by hipster transplants and feeling out of place in a way he hadn't expected. "Manhattan" feels like an appropriate gazing-alone-while-drunk-on-a-rooftop song. Don't look at the moon tonight, you can never be Manhattan.

When Deming's mother Polly is several months pregnant, she pays $50,000 to get smuggled into New York in a box. Uncertain if she wants to be a mother, one day she falls asleep on the subway and misses her stop and ends up at Brighton Beach, where she wades into the Atlantic Ocean: "The cold water made me curl my toes and the waves lapped at my shins in a sharper, faster way than the dark blue of the river in the village, yet here the sea was cleaner, grayer, larger, more angry and thirsty and beautiful all at once, not unlike New York itself." It's here that she decides she will keep the baby. "I want you to know that you were wanted," she later tells Deming. "I decided: I wanted you."

The gray ocean, the sharp cold, Polly's decision, and the art-rock synth and confessional lyrics of "You": I just thought you might like to know, you're the only one I ever loved.

Okay, so this song is about rich kids in southern California, but it's also a study in contrasts. Tight and loose, smooth sunshine, and lyrics about the emptiness behind all that sheen. (Domesticated paradise.) There's a scene in The Leavers where six-year-old Deming, Polly, and her new boyfriend are riding the Staten Island Ferry on the verge of spring. It's not just a new season but also a new relationship, and they're learning how to be a family together. Yet despite the happy moment, Polly can't fully enjoy it. She's already feeling an undercurrent of loss. Looking back, she says, "I wanted to remember this moment even as it was happening, to imagine it as already gone."

Deming is a Bowie fan, but he is also a synesthete, seeing colors paired with sounds. "Never had there been a time when sound, color, and feeling hadn't been intertwined, when a dirty, rolling bass line hadn't induced violets that suffused him with thick contentment, when the shades of certain chords sliding up to one another hadn't produced dusty pastels that made him feel like he was cupping a tiny, golden bird."

God, I love Arthur Russell. I listened to him often when writing the final drafts of my novel. There's something about the intersections of beat and instrumentation and voice that hit me in the right way. Unlike some music, Russell's doesn't necessarily drown out my thoughts, but syncs with them instead. "Come to Life" is on the folksy side, a bit of a ditty, but there's a nudging, a yearning, the two vocals hesitantly side-stepping around one another. There's movement here, or at least the desire for movement. I see Polly as a girl, in her village in China, riding her father's fishing boat at dawn. They paddle out onto the river until "the shoreline would grow dimmer and the blue would shoot in all directions, filling the frame around me, the sky so big it could swallow me, and I cracked open with happiness."

When Deming discovers Hendrix through his adoptive father's vinyl collection, Planet Ridgeborough takes on a vivid, cinematic quality. On his first trip back to New York City, nine months after he moves to Ridgeborough, he meets Angel, another Chinese adoptee:

Deming unplugged the earbuds and replaced her iPod with his Discman. He forwarded to "Angel" and pressed play. The guitar and cymbals shimmered in their ears, and he sang along. Tomorrow I'm going to be by your side. Then he got afraid that Angel might think he was singing to her, that he liked her. He hit stop. "You like it?"

"He's only, like, the greatest guitar player ever in the history of the universe."

She flipped open a container, exposing a yellowing plastic U. "Do you want to see my retainer?"

After Polly and Deming are separated—I won't give away how—she lies in bed at night, unable to sleep, lost in a half-conscious haze of nostalgia and regret. Another sleepless night for me...

Here's Shaun Fleming belting the hell out of the chorus in this sparkly-sad Sixties makeover. Here's a scene where Daniel has learned something that makes him feel hopeful and hopeless at the same time. It's a gorgeous spring night, but he's alone, walking in a park in Brooklyn, and watching the families below: "He dug his heels into the dirt and walked downhill, down the park's curved side, slow at first, getting faster, a grace note as his legs bounced upwards.... Propelled, he was almost in flight."

The summer before Polly disappears, she and Deming go for a walk near their Bronx apartment at sunset on a humid night and hear Alicia pumping from a passing car stereo.

Some people want it all
But I don't want nothing at all
If it ain't you baby
If I ain't got you baby.

Lisa Ko and The Leavers links: