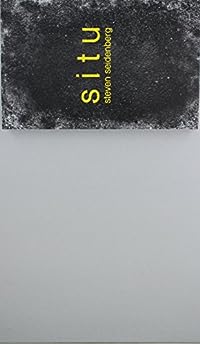 Steven Seidenberg's Situ is an impressive and immersive work that defies literary categorization.

Michael Palmer wrote of the book:

"To engage with the narrative flow of Steven Seidenberg's Situ is to pass through the looking glass of consciousness into a seriocomic world of 'mnemonic throes' and 'the null of place.' I think, therefore where am I? And what? And when? We feel the phenomenal world slip-sliding away, even as we marvel at the charged field of language and thought thus brought to light."

In his own words, here is Steven Seidenberg's Book Notes music playlist for his novel Situ:

My new work Situ explores the interstices between broader literary forms, at once an engagement of prosody more commonly associated with poetic discourse, an attention to the proximate that shares at least the mood of diegesis, and a primary set of epistemological concerns through which a kind of Cartesian self-analysis (and the close third that serves as interior counterpoint to the subject of the narrative) accepts the resting points of philosophical argument as the pivotal production of plot. This sounds more esoteric—more difficult—than the reading of it proves, although I won't say an engagement with the work is easy. You must immerse yourself in prosody to be entranced by it, must follow the argument to be flummoxed by the paradox that serves as its conclusion. Portending an investigation of the nature of such narrative decipherment as the immediate substance of the narrative—thus the object of decipherment in turn—has philosophical implications all its own, and so does the hero of Situ careen toward the unity of his own virtual collapse with that of all mimetic faculties ostensibly in earshot of that fateful mull.

Not much happens in Situ, or at least not much that can be described as happenstance, and much of what does occurs simultaneously to the reader by virtue of occurring to the narrator (or the narrator qua the subject of the narrative), and as such this exercise in tracing external corollaries to the text (in this case, recorded music) must take an accordingly eccentric form. In that spirit, I've chosen music that evokes a similarly vertiginous immediacy, in defiance of the narrative drama and dissemblance of melody. This is not to suggest these recordings aren't melodic (although some aren't), just that such melodic exploits are equally concerned with the liminal variations of pitch and tone that characterize (or can be characterized as) the pure subjectivity of the perceptual field. Thus the production of sound functions as a phenomenology and experience of infinite regress, the failure to find means to make reflection a transcendence of the corporeal ordeal of such reflecting, as an active state.

Lawrence English—"Patagonia" (side A of Viento)
This release by the Australian avant-gardist records the sounds of buildings in Patagonia and the Antarctic battered by winter storms. You feel the chill of an atmospheric violence that's self-evidently a mere representation, an uncanny experience of sounding divorced from the epiphenomenal imperium to which such sound is ineluctably attached. This frames a broad parallel to the resistance of even the most simpleminded of lyric modes to the systems of signification from which all such assume the vagrant warrant of the sign, and every indulgence of lyric device is a performance of this resistance, knowingly or not. For my work in Situ, such consciousness is employed not merely for the purpose of demonstrating the insight, but to impel both reader and narrator toward a systemic determination of the limits of those resistances, in the hopes of meaning meaning in a manner previously unrevealed—unsounded, as it were.

Giusto Pio—"Ananta" (side two of Motore Immobile)
The master of Italian minimalism proposes "the Yantra of minimal vibration" as a means to access the eponymous unmoved mover. The stolid foreground of a single organ tone shifts with the flourish of pianoforte shiver, the increasing volume serving to undermine the suggestion of some forthcoming resolution, leaving the listener to wallow in the sublimity of the implicit cosmic drone. Situ offers up the labyrinth of its Yantra as the substance of the narrative itself, moving ever forward and back, promising to promise the failure of all promises, thus the involution of both expectation and reprisal yields an opening to a disquiet that's otherwise dissimulated, and for which the narrative contrivance acts as host.

Jordan de la Sierra, "Temple of aesthetic-action" (side A of Gymnosphere: Song of the Rose)
Gymnosphere carries the listener through two hours of elliptical variations on a slow, surprisingly capacious, seven-note scale. This is derived in whole number ratios, a system of modal tuning championed by Terry Riley and La Monte Young, wherein all the notes of the scale harmonize with one another. "The search is for precise frequencies and the music between the notes," says de la Sierra, such "music" intensified by the method of recording (or in this case rerecording), which had de la Sierra and company amplifying the previously recorded tapes against the walls of Grace Cathedral, recording the recordings as they took on the acoustic charge of that dilating resonance. There's a slow unwinding of presence in Gymnosphere that I hope I've captured in the similarly relentless repetitions of Situ, an urgency and pathos that can't be placed in space or time, even as the character of the recording (and the narrative) does exactly that—the portentous intimation of an ever growing distance, a space whose limits enlarge and contract in paradoxical relation to the auxiliary vicissitudes of the subject set within it.

Alessandro Cortini—"Senza" (from Forse 3)
Cortini is better known as a member of Nine Inch Nails, but his Forse (Italian for "maybe") trilogy—consisting of three double albums performed live on an original Buchla music easel—surrenders those same menacingly melancholy melodic impulses to the rigid rules and limitations of this legendary instrument. Once again, repetitive chord progressions unfold in slow-motion arpeggios, as the circuitry compels as much a sense of the erosion of tone as its production, an analogue of Situ's forbidding follies and incantational delays.

Harry Bertoia—"Perfetta" (side 2 of Clear Sounds/Perfetta)
We're still making sense of—coming to terms with—Harry Bertoia's visionary sound art, just as we are still finding our way through the coded mysteries of Melville's The Confidence Man or Roussel's Locus Solus. There's no way to sum up the extent of Bertoia's refutations of genre and medium, nor to characterize the effects of his brute force transfiguration of sound and sculpture, each in accordance with the other. There's a seemingly unselfconscious, outsider vehemence to all of the recordings Bertoia released under his Sonambient label, and this is a posture (or at least a positioning) that underscores my own sense of reading otherwise, of writing to be read from the position of the otherwise—through which the philosophical impulse is embodied as a form of narrativity, and the distemper of a broken metrical conceit unconceals a passage to expository poise.

Terry Riley—"Performance 2, Face 1" (from Persian Surgery Dervishes)
As Terry Riley's work began to incorporate scales from the North Indian classical repertoire, so did his method of composition and performance move in closer circuit, making of the fits and starts of circular progressions an inexorable prosody of unraveling improvisation. As with all great improvisers, Riley's virtuosity as player and composer is on display in every maneuver, and while his many influences are made explicit, the attitude of his particular musical intuition is never out of view, despite no deliberate attempt to force it to the fore. The result is a set of recordings of such indescribable subtlety, such easy mastery of so many disparate forms, that each listening reveals new insight into the nature of listening itself.

Michele Fedrigotti and Danilo Lorenzini—"Il canto delle acque" (from I Fiori del Sole)
Another masterpiece of the Italian minimalist movement of the 1970s, produced shortly after Fedrigotti and Lorenzini completed work as the instrumentalists on Pio's Motore Immobile (see above). These virtuoso pieces are deceptively complex in their melodic repetitions and inversions, but achieve an open vibrancy and shimmering simplicity that recalls the whimsy of medieval folk dance. I've chosen a piano piece here, "The singing of the waters," which evokes the sense of wild melodic and metered swing one often feels when listening to moving water—or Debussy. This is a rush, not a wallow, and it fully assimilates the drama of romanticism, but with a lightness of mood that feels more functional than descriptive, a transition from rigorous involution into virtuosic play that the narrative of Situ also seeks to proffer.

Daniel Schmidt—"And the Darkest Hour is Just Before Dawn" (from In My Arms Many Flowers)
Weaving together the rhythmic repetitions of the Berkeley gamelan with the drone of a looped string section, Schmidt invents a triumphal form unlike anything that came before, and I choose this piece for the transcendent beauty of its dynamism and the sense of its unperturbed, impassive novelty—an innovation that comes from the exigency of the vision, not the impulse to innovate itself. I'd like to think—and this as a manner of describing an engagement in and commitment to artistic practice in general—that Situ is equally inventive, and for reasons similarly absent all concern for the affect of such invention, which is to say an invention in recognition of the inadequacy of any other means to make explicit the same visionary ends. That the book is a strange one, and that its strangeness is ever-presently apparent, is always only a secondary effect of the vision it unyieldingly compels.