Martin Ott's Playlist for His Poetry Collection "Lessons in Camouflage" 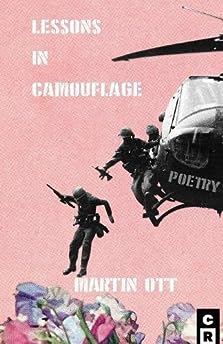 Sonia Greenfield wrote of the book:

"Martin Ott’s Lessons in Camouflage examines the place where masculinity and its expectations intersect. There is a lushness and musicality to Ott’s poems, which belies the idea that poems about manhood should be spartan. Moreover, Ott has a gift for pulling stories from everyday objects and for making newer, more useful objects out of them, which are these well-crafted poems."

In his own words, here is Martin Ott's Book Notes music playlist for his poetry collection Lessons in Camouflage:

Music has heavily influenced my fiction and poetry over the years—I listen to music while I write and I even inserted snippets of lyrics into several of the poems in my book Underdays (Notre Dame Press, 2015).

For my music playlist for Lessons in Camouflage, I decided to pair songs with individual poems in the order in which they appear in the book. Sometimes the songs align with the subject matter of the poems and sometimes with my real (or emotional) life. I’m hoping some people might consider listening to the playlist while reading the book.

I’d also like to give a big thanks to Largehearted Boy—in the process of putting my playlist together I learned a few things about this book and my writing in general.

Song: “Viva la Vida,” Coldplay / Poem Pairing: “The King of Camouflage”
I almost never remember where I was when I wrote a poem but The King of Camouflage is strange for me in a number of ways. It was influenced by a song I was listening to— Coldplay’s "Viva la Vida"—while I was driving to the Google office in Santa Monica to meet with my advertising team for the entertainment company I was working for at the time. The first few lines of the poem came to me while I barely moved in traffic. I parked several blocks away from my meeting and began writing at a furious pace. Influenced by song lyrics, I wrote lines that rhyme, something I rarely do, and it was penned in a single draft in a short period of time, another anomaly.

Song: “Born to Run,” Bruce Springsteen / Poem Pairing: “Mile Post”
When I joined the Army at seventeen, I was already racing from my demons (alcohol abuse, fears of disappearing in my factory hometown with no money), from unrequited love with one of my best friends. In basic training, I first discovered I was talented at long-distance running. Every day, I ran as though I was chasing the wind and every day I became faster, it seemed. We had two-mile races in the Army, and my strategy was to go strong out of the gate and hold the lead by force of will. It was painful but empowering, and I found the process freed my mind to think of the past and present. Running informed my imagination and, later, my writing process. The raw emotion in “Born to Run” brings me back to my younger days, my running days, every time I hear it.

Song: “Paranoia,” A Day to Remember / Poem Pairing: “Why My Father Carries 3 Guns”
The frustration in “Why My Father Carries 3 Guns” is purposefully controlled by its ghazal form and heady syntax. All the while, boiling underneath, is rage, like in this song by Paranoia, mine at the stupidity of my father and his at a society he’s trying to control, erroneously believing that everyone is out to get him.

Song: “Beautiful Day,” U2 / Poem Pairing: “Prayer for Morning Commute”
I’ve lived in Los Angeles for twenty years and have nearly always had horrible work commutes. By my best estimation, I’ve spent three years in the car—that’s plenty of time to try to become Zen with the best and worst of human nature on the road. This mediation is on full display in both U2’s “Beautiful Day” and my poem “Prayer for Morning Commute.”

Song: “Where the Twain Shall Meet,” Screaming Trees / Poem Pairing: “I Lost the Robot in the Divorce”
“Which one stays?” is a refrain in this song from my favorite dysfunctional grunge rock band. Screaming Trees fought with each other while crafting some of the best songs of the era. This tune is a perfect accompaniment to the sonnet I wrote about the two homes my kids live in and “where the twain shall meet.”

Song: “Impossible Germany,” Wilco / Poem Pairing: “Shelter”
Home is not a place. This is the thesis of both the song “Impossible Germany,” by Wilco, and my poem “Shelter.” Finding home is a process, ongoing, mysterious, and discovered in strange places. The line “Impossible Germany, unlikely Japan” in this song also makes me think of the miracle of finding my current wife and our relationship in general: a difficult German American writer paired with a Japanese Brazilian woman who became his wife under the most unlikely of circumstances.

Song: “Get Off Your Ass and Jam,” Funkadelic / Poem Pairing: “To the Guy Who Drew the Penis on the Elevator”
Sometimes it’s OK to entertain and not think too hard, to let it fly and just jam. Both this song and poem provide notes of comic relief and crassness among darker, deeper work.

Song: “Starman,” David Bowie / Poem Pairing: “Stranger”
David Bowie has left us on this earth but his music persists and influences artists of all kinds. This song imagining a visitor from another planet is the perfect pairing for a stranger wandering through an office park out of place, and out of time.

Song: “Angel,” Jimi Hendrix / Poem Pairing: “The Mystery of Three Things”
The poem “The Mystery of Three Things” is filled with the reverie we all experience when objects trigger feelings and emotions. A poster of Jimi Hendrix is one of the objects in my poem, and the song “Angel” appears in Bad Boys Play Nice, a mixtape compilation I loved when I still rocked cassettes, and another object that appears in my poem.

Song: “The Sea,” Morcheeba / Poem Pairing: “Bodies of Water”
I could see Lake Huron from my bedroom window growing up in Alpena, Michigan, and it’s still a part of me. “The Sea,” kicking off the album Big Calm by Morcheeba, tells us, “I lost my soul there,” much the same sentiment as in my poem “Bodies of Water.” Some things can be far away from us and yet always near.

Song: “Way Down Now,” World Party / Poem Pairing: “Return to Mermaid”
Some loves are difficult and lasting, like my relationship with my first wife. In the song “Way Down Now,” by World Party, we almost revel in this pain with upbeat pop-rock hooks and devastating lyrics: “She took me by the hand. Hell was the promised land.” My poem “Return to Mermaid” follows a soldier returning home to unfinished business, the siren call of his landlocked mermaid, a relationship unsteady in land, sea, and air.

Song: “The Garden,” Cut Chemist / Poem Pairing: “You Can’t Kiss an Astronaut on a Spacewalk”
When I met my future second wife, Lilian, in São Paulo, I played her the song “The Garden,” by Cut Chemist, with lyrics in Portuguese and an intoxicating beat. At the time, I must have known it was a love song—how could it not have been? Our subconscious is funny that way. My poem “You Can’t Kiss an Astronaut on a Spacewalk” is a love poem for Lilian, but using the image of an astronaut to explain the distance between us during our intense long-distance relationship. “The Garden” also offers its message of love in a second language in this playlist.

Song: “Flowers,” Camper Van Beethoven / Poem Pairing: “Unclaimed Baggage Center”
Hidden in the crevices of my poem “Unclaimed Baggage Center” are objects imbued with meaning, each with a life of its own like the “flowers growing out of bones” in this accompanying song by Camper Van Beethoven. The tone in both is sentimental but spiced with irreverence to fight against the sadness of loss.

Song: “Brain Damage,” Flaming Lips and Star Death and White Dwarfs, with Henry Rollins and Peaches / Poem Pairing: “33 Lessons in Camouflage”
Repetition in music and poetry is the engine that helps move art from our heads to our hearts. “33 Lessons in Camouflage” ends my book with a poem that draws from the other poems before it, utilizing a string of aphorisms. This cover of the Pink Floyd song “Brain Damage,” by the Flaming Lips (and friends), also repeats familiar ground but recasts it in a new direction. What more can we ask for in a finale?