C. J. Farley's Playlist for His Novel "Around Harvard Square" 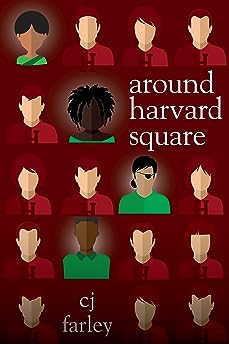 The National Book Review wrote of the book:

"A smart, satirical novel about surviving the racial and cultural tensions ratcheted up in the elite Harvard hothouse. Farley has created a marvelously engaging and diverse set of characters, at the center of which is a nerdy Jamaican American with a philosophical bent and his cohort of oddballs struggling to win a spot on Harvard's brainy humor magazine, which provides a springboard for Farley to dive into the ethics of comedy, among other subjects."

In his own words, here is C. J. Farley's Book Notes music playlist for his novel Around Harvard Square:

I was the music critic for Time magazine in the 1990s so I have a fondness for the music of that era. I can still hear the echoes of Lilith Fair and Lollapalooza and Latin Pop and Boy Bands. I remember lots of critics were down on the recording artists of the time at the time but as the decade rolled by it became clear that we were in one of the best periods for music not one of the worst. Rap came into its own and alternative and grunge made rock relevant again. After the 90s, music lost its way and its shape and everything started streaming and nobody would ever idolize albums in quite the way they did then because music wasn’t something you could hold in your hand anymore. The last album cover anyone remembers is that baby in that pool swimming after that dollar on the hook. Every chapter in my novel Around Harvard Square is centered around a song from the 1990s. Sometimes the link is obvious, other times you have to dig deep for the connection.

Lauryn Hill, “Lost Ones”: Lauryn once gave me an unmastered copy of The Miseducation of Lauryn Hill before she had finished it. Around the same time, I interviewed Bruce Springsteen and he asked me the best thing I had heard lately. I couldn’t part with Miseducation so I gave him a copy of the new Seal album I had in my car. I think my life would have gone differently if I had given New Jersey’s greatest rocker the debut album of New Jersey’s greatest rapper.

Nas, “Represent”: I wrote about Nas’s first album for Time and interviewed him. I knew it was a classic from the first track. He should be in the Trinity with Tupac and Biggie.

Smashing Pumpkins, “Geek U.S.A.”: Even before that scene in Garden State with the Shins, I was running around with the Smashing Pumpkins’ Siamese Dream when it came out and slipping headphones on people and telling them “You gotta hear this one song it’ll change your life.”

Nirvana, “Territorial Pissings”: I remember being invited to see MTV Unplugged in New York and Kurt was standing a foot away from me and I was going to talk to him but I figured there would be plenty of time later. There wasn’t.

Elliott Smith, “Ballad of Big Nothing”: I once told singer-songwriter Alana Davis that she should cover this song. She told me “You realize it’s about drugs, right?” I really shouldn’t tell artists what to do.

2Pac, “If I Die 2Nite”: Tupac brushed by me at a party once and he had an entourage of a couple dozen men holding standards like they were in the Roman freaking Legion.

Radiohead, “Subterranean Homesick Alien”: I interviewed the band once when they were on tour in Scotland and at first Thom Yorke wouldn’t talk to me. Then one night, after midnight, he summoned me to the back of a tour bus for a long chat. I don’t even remember what he said and the article is behind a paywall on the Time magazine site.

Nirvana, “Come As You Are”: The movie Captain Marvel featured this same song on its soundtrack. It was more proof to me that the '90s aren’t just nostalgia, they’re forever.

Smashing Pumpkins, “Muzzle”: “I fear that I am ordinary just like everyone…” Arrogant or humble? You decide.

Lauryn Hill, “Doo Wop (That Thing)”: Would you rather release one great album or a lifetime of mediocre albums? Lauryn chose the path of greatness.

Lucinda Williams, “Car Wheels On a Gravel Road”: I once got Lucinda to come by the Wall Street Journal to play a couple songs and the first song was so perfect that it made me cry--I mean single tear down the cheek emotional cry, like in movie close-ups. Then my sound guy told me there was something wrong with the tape and we had missed recording it.

U2, “Mysterious Ways”: Back in college, I once waited in line in the cold in Boston for nine hours for U2 tickets and they sold out in front of me--scalpers pretty much got them all.

Green Day, “Coming Clean”: Before Woodstock '94, the band asked me the best way to hide a stash of marijuana on the concert site the day before so it wouldn’t get confiscated on the way in. I had no answers for them because I don’t even drink.

Fugees, “The Mask”: Frantz Fanon would have liked this song which is maybe why I like it.

Liz Phair, “Divorce Song”: I was considering her song “Fuck and Run,” but my book is YA.

Beck, “Loser”: I still can’t tell if this is a novelty hit or a classic.

Aterciopelados, “Rompecabezas”: This Colombian band should have been as big as Shakira.

Nusrat Fateh Ali Khan and Michael Brook, “My Heart, My Life”: I love Nusrat, although I could do without Brook.

Girls Against Boys, “Everything I Do Seems to Cost Me $20”: The head of my publishing house was in the band behind this song. I love this track and I couldn’t believe how well it fit the chapter.

Radiohead, “Let Down”: Toots & the Maytals do a great reggae cover of this song which you probably won't believe until you check it out on YouTube.

Radiohead, “Paranoid Android”: Okay, maybe I went a little crazy on the Radiohead.

Sade, “Kiss of Life”: Sade doesn’t do a whole lot of press but I talked to her a couple of times. She maintained her mystery in an age of oversharing.

Shakira, “Ciega, Sordomuda”: I spent some time in Miami with Shakira when she was breaking into the English-language market. My favorite album of hers is her Spanish-language classic Dónde Están los Ladrones? This track is from that album.

The Notorious B.I.G., “Kick in the Door”: “Kick in the door, waving the four-four. All you heard was Poppa don't hit me no more.” I was supposed to interview Biggie for Time, but the day we had set for the sit down ended up being the day of his funeral.

Dr. Dre, “Let Me Ride”: I hate gangsta rap and the thing I hate most is that I sometimes love it.

Makaveli, “Me and My Girlfriend”: Like Tupac, characters in my book use a lot of pseudonyms.

Rage Against the Machine, “Killing in the Name”: One of rap-rock's greatest bands. Maybe rap-rock’s only great band.

Dr. Dre and Snoop Doggy Dogg, “Nuthin’ But a G Thang”: I interviewed Snoop at Death Row Records when he dropped his debut album and I was fascinated to find that his speaking voice was as musical as his rapping.

Lauryn Hill, “Ex-Factor”: One of her greatest songs.

The Roots & Erykah Badu, “You Got Me”: I love Questlove’s drumming at the close of this track.

Busta Rhymes, “Woo Hah!! Got You All In Check”: I just thought that this is a great name for a chapter near the end of a book. It would make me want to read until I got to it and then on to the end.

Fugees, “No Woman, No Cry”: I liked the idea of evoking Bob Marley even though it’s another band covering his song.

Public Enemy, “Welcome to the Terrordome”: Political rap is pretty much dead, but the memory of PE helps keep it alive in my head.

Jay Z, “Hard Knock Life”: You almost have to have Jay Z on here somewhere.

R.E.M., “Nightswimming”: One of the band’s most beautiful tunes.

Lauryn Hill, “Everything Is Everything”: That says it all.

CBC Radio interview with the author