Largehearted Boy: Ryan Blacketter's Playlist for His Story Collection "Horses All Over Hell"

Ryan Blacketter's Playlist for His Story Collection "Horses All Over Hell" 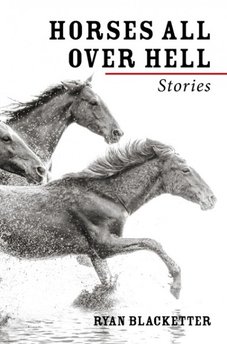 Ryan Blacketter's Horses All Over Hell is an enthralling collection of interconnected stories.

"The eleven intricately woven short stories of Horses All Over Hell portray a family caught in an ever-deepening spiral of damage and despair while bound together by ties of love in a Western landscape that comes to life on the page. The deep flaws, the beauty, and the bravery of these richly imagined characters will linger with the reader long after the last page"

In his own words, here is Ryan Blacketter's Book Notes music playlist for his story collection Horses All Over Hell:

When I started writing Horses All Over Hell, I ridiculed the father character, Marty, in scenes. In the Lewiston, Idaho of my childhood, my dad was a parole officer, and often nervous and irritable. He loved his family, but it didn’t often come across. Later, when I reimagined him as a more humorous and loveable drunk, a human being finally emerged on the page. At this time the mother, Joanna, became an enigmatic and rebellious woman, despite her depression and religiosity.

My dad’s small record collection included Elvis Presley, Johnny Cash, Hank Williams, and the Every Which Way But Loose soundtrack. In the first story of Horses All Over Hell, “Starlings,” the boys’ father, Marty, brings home his wife’s sister after the bars close, to try to get her back on booze. They also have a half-baked plan to cure Joanna of religion. To make it a party, he puts on Hank Williams and directs the boys to dance on Joanna’s bed while she’s asleep. Joanna sits up and talks to them. She tells them she was suicidal when she was drinking. She says the river wanted her dead back then. She doesn’t wish to return to that. Nobody seems to get the seriousness of her words except for the boys, who at this moment are listening outside the door, after their father told them to go to bed. Matt leans his head on his big brother Cory’s arm.

“Heartbreak Town,” by the Dixie Chicks

It’s Lewiston, Idaho, in the 90s, and Christians are everywhere. Despite Joanna’s sincere faith, the social obligation of Christianity is often a source of stress for her. In “Sending Those People Home,” a church family invades the Shane’s house, neglecting to conceal their disturbance about how dirty the place is. In “Convent Boys,” while church families pick blackberries, she grows “tired of all this smiling.” She’s exhausted by the need to perform, to seem perfect, by the gossip directed at her family. She prefers to lie in bed, with her Bible, her books, and her depression.

“The Girl from Ipanema,” by Astrud Gilberto, Joao Gilberto, and Stan Getz

In “They Work at Night,” Joanna seeks out the friendship of Lucy, a Native American painter who is also a former drinker. Joanna is awake in this friendship, finally out of bed. Cory has noticed the way his mom looks at Lucy, with palpable attraction. While Marty gets drunk with his brother one day, Joanna and her new friend crash the state fair with Cory and Matt. At the fair Cory follows them but stays well behind, as if he’s frightened the other fairgoers will see what he sees.

It’s not news to say children speak, think, and move differently than adults, but I had a difficult time rendering these differences. Kids live inside their imaginations. They inhabit a deep woods of odd perception. In “They Work at Night,” Cory has fled Lucy’s house in the country where he was visiting with his mom and brother. He’s worried that his father is too drunk at home to coach his game, and must walk the few miles and wake him up. He thinks a horse on the road is judging him, and yells at it. When he notices that Lucy has seen his outburst, “He ran away on weird legs.” After this story I felt as though I could write about children if I kept at it.

Ryan Blacketter and Horses All Over Hell links:

Largehearted Boy playlist by the author for Down in the River