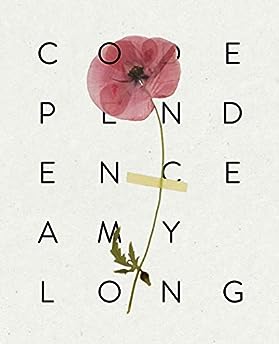 Brian Blanchfield wrote of the book:

"Fearless, haunting, and transcendently honest, Amy Long’s Codependence is a memoir of pain and its paradoxes. Long documents her coming of age as an ambitious young writer plagued by chronic headache and entangled with a boyfriend’s opioid addiction. The essays that result explore the complexities of care, hurt, and hope with elegance and precision. Long exposes her every nerve, crafting a story both intimate and deeply relevant. An essential book for the opioid era."

In her own words, here is Amy Long's Book Notes music playlist for her essay collection Codependence:

I'm an old-school mix-tape maker. I used to make them for the Intrepid I drove in high school, which my then-boyfriend wrecks in Codependence's second essay. I've loved seeing writers' musical tastes in Largehearted Boy playlists and reading their thoughts on how the songs they pick intersect with their work, and I've been thinking about mine since before I had a book to soundtrack! I lined up the songs so they transition nicely into each other and chose songs that create a coherent listening experience the way the essays in Codependence cohere into a narrative arc despite its non-linear structure and formal experiments. Enjoy!

The first essay in the collection starts with me telling my mother that I'm taking opioids again to treat my intractable headaches and braids in memories from my childhood, teenage, and more recent years. I chose “Every Single Night” largely for the lines “little wings of white-flamed butterflies in my brain” and “That's where the pain comes in / like a second skeleton...,” which echo some of the imagery in the essay and introduce the pain thread that runs throughout the book. But, listening to it, I find all these little connections to parts of the essay or the book as a whole that I really like: the anxiety I felt about telling the mom, the unrelenting quality of chronic pain, even the “double king-sized bed” (there are a lot of beds mentioned in “Relapse”!).

I've never heard a better sonic representation of what it feels like to get high for the first time, which I do a lot of in this essay. “Product Warning” is made p of six short pieces shaped like prescription informatics; they kind of summarize the main romantic relationship featured in the book—with David, a slightly older guy who introduces me to the drugs to which he's addicted. So, lyrics like “I want to see it when you get stoned on a cloudy breezy desert afternoon” work well for that. But I also learn a lot about myself in each piece of this essay, and the themes of self discovery, confusion, and newness that you hear in “Car” parallel the essay nicely. It's also my favorite Built to Spill song.

“Initiation” is a more traditional braided essay—it takes the same numbered-paragraph form that “Relapse” does—that looks with more depth at the beginning of my relationship with David. I know he's kind of a bad idea, that this love might be dangerous, but I go out with him anyway. “This slope is treacherous / and I-I-I-I like it” perfectly depicts what I'm doing with David here. I love Taylor Swift. I could have made this whole playlist using only her songs. And I was listening to her a lot while I wrote the book. Most of these songs were on playlists I listened to as I worked.

“A Glossary of Terms: Excerpts from A Glossary of Iatrogenic Opioid Addiction”: “Accident Prone,” Jawbreaker (Dear You, 1995)

“A Glossary...” is shaped like a glossary; it catalogs every drug I've taken (as of about 2016) to treat my headaches or other symptoms and issues related to them. It's not a hopeful essay. I keep hitting dead ends—having “a near miss or a close call” with a drug but hitting a wall with its side effects or inefficacy—and I never find anything that works much; lines such as “I got to you there was nothing left” or “I scratch my accidents to the wall” parallel all the searching and cataloging in the essay. I also think “What's the closest you can come / to an almost total wreck / and still walk away / all limbs intact?” is a good metaphor for invisible illnesses or disabilities.

This essay centers on my sisters (I'm a triplet) and their responses to my pain and the drugs with which I've chosen to treat it. I use an image in it of us transfusing in the womb, and this song is just too perfect for that. But there are also a lot of cool little parallels that, as with “Every Single Night” or “Car,” you don't really notice until you've read the essay and listened to the song with its themes in mind.

I know, most literal choice ever—a song called “Hotel” for an essay that takes the form of a motel key—but I had to use at least one Tori Amos song (I've loved her since I was 13, and I've seen her live over a dozen times; I could also have made the entire playlist out of Tori songs), and I like how this one kind of sounds like future-me looking back on high-school-me going “You were wild / Where are you now? … I'm still alive.” Tori says the song's narrator “knows [she and the “you”] can't be lovers because it's a whole other life, [but] she just can't let him go,” which is also in a lot of ways how I felt about and feel about David.

In “Use and Abuse,” I really dive into the dark places in my relationship with David. There are so many lines in “Cold Cold Water” that align with things I write about here—my favorites “And I'm so number one that it's a shame / that you let other numbers in the game” and “You search all day for just a taste,” which evokes all the running around we do looking for the drugs David needs to stay out of withdrawal—but mostly I chose it because a friend from college who is in the book put it on a mix CD she made for me right around the time she met David, and I like the wild, crashing kind of sound it has and the tenuous confidence in her vocals.

Raymond Raposa (Castanets) and I are touring together in support of the book, but I would have put both Castanets songs on this playlist anyway. I love how seedy this one is; how the lyrics “Ohio, Ohio, what are we gonna do / when you can't stay clean and I cannot stay mad at you?” capture the feelings in this essay, the way the title connects to a scene in which David locks me out of our motel room and won't let me back in, the shame and bravado in it.

“Pharmacies of New York”: “Cop Shoot Cop,” Spiritualized (Ladies and Gentlemen, We are Floating in Space, 1997)

My friend Silas Breaux, a ridiculously talented printmaker, made the map that accompanies this essay, which follows me on my route as I try to fill my prescription at different pharmacies in New York. Even though I know this song is about heroin, the idea of picking up what you need and getting a moment of peace right before you have to turn around and do it all over again resonates with the essay and with my experience as a pain patient. People like to draw bright lines around “the addict” and “the patient,” but we're not that different; we're all subject to policies that shape or govern our lives, and we share similar anxieties.

This is the song I go to when I'm really down and I'm driving and I really need to scream “Give me one single reason to live / to try anymore / It don't have to be good.” “Comedown” deals with the depression that I've always felt anyway but that pain and everything that comes with it exacerbate. I almost used “Blue Chicago Moon,” but I listened to this one all the time when I was on Suboxone, part of which the reader sees in this essay, and it always made me tear up.

All the narrative threads kind of come together in this final, titular essay. I'm in pain, I'm living at my mom's house, and I'm thinking about getting back together with David for dumb but understandable reasons, and I hear the sadness and resignation and trapped-in-this-relationship thoughts I have in “Codependence” in “Dance Dance.” I always picture its story taking place in a cabin in the middle of the woods, the seasons changing around it but nothing changing in the cabin except what's inside the characters heads. Lyrics such as “We stayed in / dodged our friends / did some drugs / and our best to disappear” or “I hadn't told the truth in months / no, I'd been lyin' even to my lamb” match up well with the essay, and you can kind of listen to it as if it comes from either my or David's perspective. Ray is such a talented lyricist and so good at conjuring scenes with his music, and “Dance Dance” has come to my mind every time I've reread or edited this essay because the song sounds so much like the claustrophobia and disappointment and fear I depict in it.