Sheila O'Connor's Playlist for Her Novel "Evidence of V" 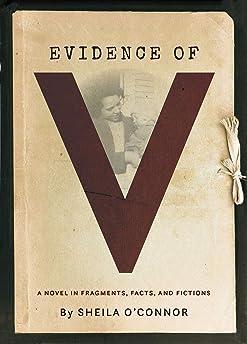 "In riveting juxtaposition of prose and historical research, O’Connor recreates an almost Atwoodian reality where girls, some as young as eight or nine, were labeled “sex delinquents” and forced to reside in group homes designed to reform and domesticate them. . . . V’s harrowing tale highlights the stark reality of an all-too-recent past where victims of sexual abuse were scapegoated for their perpetrator’s crimes."

In her own words, here is Sheila O'Connor's Book Notes music playlist for her novel Evidence of V:

Evidence of V was with me decades before I found the hybrid form to hold the work. I’d come at it through monologues, an early draft of a play, poems, short stories, a traditional epic novel that crossed generations, but with each attempt the material refused traditional forms. Inspired by the true story of my maternal grandmother’s incarceration at fifteen, the book combines family secrets, legal files, flash forms, lyric fiction, nonfiction and poetry, historical documents and photograms to tell the story of V, a talented young entertainer committed for six years to a juvenile detention facility for an unplanned pregnancy. The book moves from V’s early days of freedom on the streets of Minneapolis, to her incarceration, and her eventual parole as a house servant. Set in 1935, V’s story is both historical and hauntingly contemporary as we continue to confront pressing issues of justice for girls and women.

The playlist follows the novel's trajectory and V struggles to survive in a system that does more to harm than help.

Peggy Lee: Ain’t We Got Fun

The novel opens with V performing “Ain’t We Got Fun” for spare change on a sidewalk in downtown Minneapolis. The need for money is real in 1935 Minneapolis, but so is V’s desire to be a star. It’s here, at the closing of her song-and-dance routine that she meets the handsome Mr. C, a thirty-five-year-old nightclub manager who offers V a job.

“Fame” speaks to both the newfound power and the deep longing that consumes V in her early days as a dancer at the Cascade Club. Like so many aspiring talents, V is ready to embrace the fame she believes is in her future. The mix of hope and delusion that fuels so many artists is part of what makes this song both an anthem and a cautionary tale.

V’s defiance, her decision to pursue her dreams regardless of social norms or judgments capture her young strength.

“Fast Car” continues the theme of V’s longing, and her steadfast belief in a better world outside the one she knows. Mr. C with his black Ford and his wallet full of bills, becomes V’s path to stardom and escape. Dancing in his club, visiting his room at the Belvedere Hotel, V imagines their move to New York where she’ll finally sing and dance on Broadway as a star.

V’s turning point, her capture by police in Minneapolis, her trial, her eventual incarceration—all of that is in this song.

“I fought the law and the law won.”

The balance of anger with defeat mirrors her internal reality as she begins her sentence and confronts the daily grind of institutional labor.

Prine takes us inside the life of the incarcerated, the abandonment felt on holidays, the tedium of the small details that comprise the inmates daily lives. There’s a resignation to this song that hits hard against whatever hope the narrator once had. The closing admission of homesickness, and the final lines closing like a letter--

--reminds us of the words we never actually hear from the incarcerated.

This heartbreaking song speaks to the absence of love in V’s life inside the institution. Although the head of each unit was referred to as the “house mother” and inmates were obliged to call them “mother,” the charade was lost on V. It was her own mother she needed, and her own mother she’s forced to live without.

This cover of Dianne Reeves’ song soulfully captures the crushing isolation V feels in captivity. The world she knew and loved in Minneapolis is gone. Forbidden to have contact with friends, with Mr. C, allowed only limited censored letters from her family, everything she ever loved is lost.

Smith’s efforts to process familial loss and trauma influenced the center of the book as I considered the passage of time within the institution, and the sorrow of V’s daily life. Haunting. Discordant. Nonconforming. Symphony 8, IV, and all of Smith’s album Archaic mirror the fragmentation in V’s life, and in my life as her descendant.

A heartbreaking account of placing an infant for adoption, this song reminded me of V’s great love for her baby June, her hopes for June’s future, and how much she suffered when June was taken from her against her will and placed with a new family.

The Animals: We Got to Get out of This Place

V’s desire to escape the institution, the cruel home where she’s paroled, the six-year sentence stealing her young life, her desire to make a better life with June, all of that rises in the rage and insistence of this song. The repetition, the desperation—

--all of the is beating through V’s heart when she decides to run. When I pictured her escaping parole, escaping the oppression of captivity, running fiercely toward June, I imagined her singing this refrain to her young daughter.