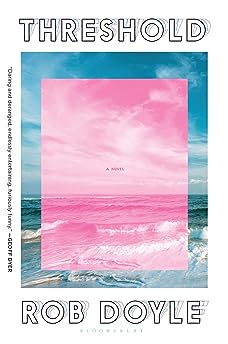 Rob Doyle's Threshold is a propulsive, visceral, and unforgettable novel.

"Confidently told . . . The masterly narrative pacing brilliantly counterbalances lurid episodes and sometimes terror with devastating wit and epiphany. As ever, Doyle's prose is compulsively readable, and his insights always credible and occasionally astonishing."

In his own words, here is Rob Doyle's Book Notes music playlist for his novel Threshold:

There are eleven chapters in my new book Threshold, which is a tour of consciousness and the world through which it drifts; a probing of fundamental enigmas and a quest for cheap thrills. I’ve chosen a track for each chapter. Here goes…

The opening chapter, ‘Mushroom’, is a personal and cultural history of ‘magic’ psilocybin mushrooms. This euphoric, pristine remix of a track by the great Japanese musical polymath evokes something of the illumination and joy of a good psychedelic experience. I can’t hear this track and not register a lift in my mood.

‘Sicily’ is a chapter inspired by a period I spent living on that island in my mid-twenties, as a sexually frustrated teacher with literary ambitions. Bob Dylan had just released Together Through Life, an album often held in low regard even by fans who otherwise admire Dylan’s later work. But I got hooked on the album, listening to it while strolling around the sun-warmed town overlooking the Gulf of Castellamare where I lived. Its breezy, accordion-sweetened sound was a happy accompaniment to the white wine, plump olives, and golden beaches of Sicily. ‘Life Is Hard’ is as pretty as it is simple.

3. ‘Christine’ by Christine and the Queens

I throw my hands up and admit it: I’m Francophile and always have been. I travelled to Paris in January of 2015, a few days after the Charlie Hebdo terror attacks - an experience which inspired the chapter titled ‘Grave’. I was listening heavily at the time to Christine and the Queens’ first album Chaleur Humaine (the French original, rather than the English-language version released later). ‘Christine’ is gorgeous: light, jaunty, makes your shoulders move. The whisper-rap section from 2:15 is so sexy and elegant, even if my French isn’t good enough to know what she’s on about.

4. ‘A Meeting By the River’ by Ry Cooder and Vishwa Mohan Bhatt

‘Hotel’ is a chapter that takes place largely in India (as well as Thailand), and involves reflections on Buddhist philosophy along with a ketamine overdose. For geographic appropriateness, I’ve chosen the title track of the gorgeous collaborative album that Ry Cooder and the Indian musician Vishwa Mohan Bhatt recorded an hour after meeting for the first time. Bhatt plays the mohan veena, a form of slide guitar. Listening to the track sounds to me like drifting downstream on a raft, no worries at all, the dragonflies and fishes as your friends.

The chapter ‘Knife’ involves the big scary French writer and pervert Georges Bataille, and takes us from Paris to the hills of Burgundy and back again. One thing that isn’t big and scary - but is impeccably French - is the singer Camélia Jordana, who has recorded some superior and highly infectious pop songs. ‘Moi c’est’ is from her first album, which I listened to while driving around France with an ex who knew Jordana a little.

I once pledged to my friends, the obscure but wonderful Dublin electropop act The Moves, that if a film was ever made of my first novel Here Are the Young Men, I would advocate to have their superb track ‘Subterraneans’ featured on the soundtrack. A film was made of the film (for forthcoming release), but I turned out not to have much of a say in its creation. To make it up to The Moves, I choose for the ‘Tent’ chapter of my new book - which involves a trip to the documenta art festival in Kassel, Germany - the closing track from their second album Negative Space. I love everything about this song, including the lyrical allusion to the rise of Islamic State, an event that was contemporaneous with the song’s creation.

For the chapter ‘Mediterranean’, which describes a misadventure to the town of Blanes on Spain’s Costa Brava, the adopted home of the late Chilean novelist Roberto Bolaño, I offer you ‘Benidorm’ by Art & the Ladies, the occasional and haphazard electropop act in which I myself am the chief vocalist. The other members of Art & the Ladies are my friends Simon (with whom I’ve made music since we were in a punk band during secondary school) and Phil, who is also in The Moves. We’re not very prolific - in three years we’ve recorded three songs - but one day we will conquer the earth.

In late 2019, while my girlfriend and I were living in Berlin, the novelist Adelle Stripe passed a proof copy of Threshold to Lias Saoudi of the band Fat White Family. He got in touch and we began a lively correspondence via Instagram DMs, during which time I became seriously enchanted by the band’s third album Serfs Up! Its sweet-sleazy elegance and lyrical flair took up residence in my imagination as I played it on headphones while taking walks around the city. ‘Rock Fishes’ is the most melodically luscious song on there. (Oh, and the link here is that the chapter ‘Nightclub’ is a homage to Berlin, in all its seedy glamour.)

9. ‘Keep the Streets Empty For Me’ by Fever Ray

I began writing the chapter ‘Demiurge’ after I’d inadvertently knocked myself out for a night and a day with a Seroquel pill, then woke up and walked in the pre-dawn darkness along the Canal Saint-Martin, and finally cycled across Paris to see a huge, destabilising show by the artist Tino Sehgal at the Palais de Tokyo. ‘Morning Keep the Streets Empty For Me’ evokes better than any song I know the enchanted strangeness of wandering in an empty and silent city, before it awakens.

When in Rome, do as the Romans, and when I lived in Paris - where Threshold’s penultimate chapter ‘Psychopomp’ unfolds - I listened to a lot of Serge Gainsbourg. I mean, I’ve always listened to a lot of Serge Gainsbourg, but in Paris he was on especially heavy rotation, as were certain songs by Françoise Hardy. ‘La Javanaise’ is achingly romantic, suave, debonair - much like the man who wrote it, whose grave is located in Montparnasse cemetery, along with those of Samuel Beckett, Susan Sontag, Charles Baudelaire, Simone de Beauvoir and Jean-Paul Sartre.

This one is easy. Early on in Threshold’s climactic chapter, which is a vault into the metaphysical beyond fuelled by the megaton psychedelic DMT, the first scenes of Gaspar Noé’s sublime film Enter the Void are described. In the film’s frenetic opening sequence, in which massive-fonted credits assault the viewer at unreadable speed, this track by the Warp-label electronic act blasts and pummels. Specifically, it’s the thrillingly brutal breakdown section that begins at 2:28 - total aural bombardment! A similar effect to watching those opening titles and hearing that music, dear reader, is what I hope to achieve through my writing.

Rob Doyle was born in Dublin. He is the author of the story collection This Is the Ritual and the novel Here Are the Young Men. The latter was chosen as one of Hot Press magazine's “20 Greatest Irish Novels 1916 – 2016” and has been adapted as a forthcoming film. Doyle is the editor of the anthologies The Other Irish Tradition (Dalkey Archive Press), and In This Skull Hotel Where I Never Sleep (Broken Dimanche Press). He has written for the Guardian, Vice, The Dublin Review, and many other publications, and he writes a weekly books column for The Irish Times. He lives in Berlin.