Lydia Millet's Playlist for Her Novel "A Children's Bible" 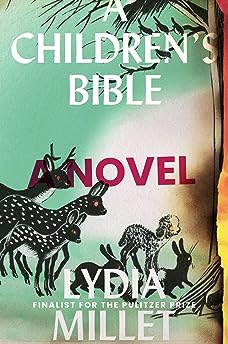 Lydia Millet's A Children's Bible is powerful and prophetic, another brilliant novel from one of our finest fiction writers.

"This superb novel begins as a generational comedy...and turns steadily darker, as climate collapse and societal breakdown encroach. But Millet’s light touch never falters; in this time of great upheaval, she implies, our foundational myths take on new meaning and hope."

In her own words, here is Lydia Millet's Book Notes music playlist for her novel A Children's Bible:

As the book opens it’s a leisurely summer, with dips in a lake and walks on the beach and the laziness of floating on a canoe in the sun. Britta Phillips, of Luna and Dean & Britta, does a cover of the Evie Sands original that’s dreamy and sad even as conjures up a romantic idyll that seems to confuse, through the tense of its lyrics and the nostalgic tone of its music, an idealized future with a lost past.

Literal sure, but a tale about flooding needs a good flood ditty. This one’s pretty on the nose: it has mothers and fathers, bees and trees, washed-out bridges and a quest for higher ground.

Alternately, maybe the flood ditty could be Frank Black’s “The St. Francis Dam Disaster,” about the 1928 collapse of a dam in California that killed over 400 people and more or less ended the career of William Mulholland, the water baron and civil engineer fictionalized in the movie Chinatown.

I came to this one late, first hearing it over the opening credits of Pamela Adlon’s great series Better Things. I like the raw, jangling beginning and the sadness of the melody—its lyrics are an accusation that turns into a child’s pleading. If this novel were a film, I’d play “Mother” over the scene where the teens ride away from their summer mansion in a caravan, leaving their parents behind.

My personal favorite by MGMT is “Time to Pretend,” but “Kids” is great too. “Control yourself/Take only what you need from it/A family of trees waiting to be haunted.” It could play over the novel’s nativity scene in a barn. “A baby is born/Crying out for attention/Memories fade/Like looking in a fogged mirror.”

“Seasons in the Sun,” Terry Jacks

Around a campfire when they’re holed up at a farm, the kids—at first reluctantly—sing what they call hippie songs with friendly hikers they call the angels. “Spirit in the Sky” by Norman Greenbaum, some Simon and Garfunkel. Terry Jacks, a Canadian musician, got this particular hippie song from Jacques Brel’s “Le Moribond” via a translation by Rod McKuen performed by the Kingston Trio. It didn’t start out very hippie: Brel told Jacks, over a shared dinner in Brussels, that he’d written it in a brothel in Tangiers, about an old man who, as he’s dying, forgives his wife for “screwing his best friend,” as Jacks reported. He became a one-hit wonder with his own version in 1973. Later he’d give up music after a revelation in nature, becoming a Christian and ardent environmentalist. Call it hokey if you like, but “Seasons in the Sun” still breaks my heart.

There are many tunes with this name—my favorite is Luna’s cover of the Beat Happening original, which is also good. A childish longing for the moments of youth we can’t repeat, the first loves that shimmer in our memories and will never come back.

An antidote to dreaminess, this is a dark and mechanical electronic march that for me brings up the threat of technology, the threat of meltdown, the bleakness and relentlessness of machine. Chris Corner’s oddly invigorating gesture of coldness could go along with the moment in the book when men with guns break into the children’s refuge: a soft, slow world turns gray, steely, and sharp-edged.

I can’t make up a playlist without putting the Mekons on it. For the children’s revolt against the interlopers, we need music with a manic energy. “Teeth” is early Mekons, released as a single on vinyl in 1980.

“Dreaming My Dreams With You,” Waylon Jennings

The love relationship at the center of A Children’s Bible isn’t romantic but protective, a sister’s devotion to her little brother. That doesn’t matter, though—I’d play this over the last chapter anyway. Waylon’s gentle, mournful lullaby, written for his remarkable voice by Allen Reynolds, is about loss and the generosity that memory can confer. Whatever blame resides in this quiet evocation is self-blame: “I hope that I won’t be that wrong anymore,/And maybe I’ve learned this time./I hope that I find what I’m reaching for,/The way that it is in my mind.”

If I get a funeral or memorial or life celebration someday, and they play one piece of music for me, I wish for this one. Apocalyptic but still curiously hopeful, it pulls off beautifully what Leonard Cohen did with such brilliance and singularity: wrote fight songs that are also elegies and hymns to grace.

Lydia Millet has written twelve works of fiction. She has won awards from PEN Center USA and the American Academy of Arts and Letters, and her books have been longlisted for the National Book Award, shortlisted for the National Book Critics Circle Award and Los Angeles Times Book Prize, and named as New York Times Notable Books. Her story collection Love in Infant Monkeys was a Pulitzer Prize finalist. She lives outside Tucson, Arizona.