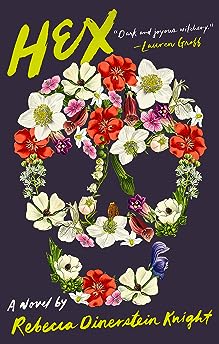 The New Yorker wrote of the book:

"[A] swift moving, sardonic novel. . . . Dinerstein Knight paints a withering portrait of this web of toxic romances, and of the excesses of academia, while illustrating how both the heart and the mind can be broken and reshaped by changing circumstances."

In her own words, here is Rebecca Dinerstein Knight's Book Notes music playlist for her novel Hex:

The Music of Hex

These songs, ranging from contemporary narrative-ballads to 80s Euro-pop singles to Bollywood to Sesame Street to musicals to medieval, informed and appear in the novel Hex. Their overarching themes are in line with the book’s, namely devotion, obsession, wonder, affection that takes physical and edible forms, and a permeating but loose mystical atmosphere. Hex follows Nell, an expelled PhD candidate working with poisonous plants, and her spiritual addiction to Joan, her former adviser. Those two are surrounded by friends and lovers, all in competition with each other. These songs sit well within their world of six-way attraction, ambition, temptation, frustration, and lust.

“Think About Me” by The Blow

One of the deleted scenes of Hex took place in a karaoke room, wherein Nell revealed herself by serenading Joan with the demanding, kaleidoscopic lyrics of this extended The Blow ballad. It’s a sweeping piece of music that’s more novella than song. Even the syntax of these lyrics (long, complete, compound sentences) stretches toward a kind of bloated and operatic longing that is perfectly suited to Nell’s fever pitch. I ultimately didn’t want Nell to be so explicit about her yearnings at that point in the story, and the song was in fact so in sync with the situation that it felt a little too neat, but I have a ton of admiration for The Blow in concocting this super articulate musical melodrama.

I started writing Hex during the fall of 2017, right before the release of the movie Call Me By Your Name. The lusciousness of the Italian visuals in that film, coupled with the raucous and unapologetic Euro-pop soundtrack (punctuated by quieter, darting John Adams pieces), made a huge impression on me as I wrote about longing and beauty. This single, released in France and Monaco in 1981, is about being unable to communicate desire. But it’s also an upbeat, catchy hit, full of the sort of self-mocking but fundamentally confident attitude that characterizes Nell’s voice.

“Should Have Known Better” by Sufjan Stevens

Sufjan Stevens contributed several other tracks to the Call Me By Your Name soundtrack, captivating songs that got me listening to him again, but I wound up being most drawn to this track off his 2015 album Carrie & Lowell. At 5:07, the song’s length provides some of the same vastness that I enjoyed in “Think About Me”––a willingness to explore subject matter at the scale of prose rather than poetry (lyrics can often appear as poems on a page, but these songs seem to want to be written as paragraphs). As he did in his twenty-five-minute 2010 “Impossible Soul,” Stevens divides this track into a few distinct sections, chapters that build upon and transform each other.

This song is so simultaneously odd and earnest, it matched Nell’s personality well. It presents the idea that the object of affection can open up space and time, dimensions, worlds. Nell beholds Joan at this level of imaginative intensity, and this song, while lilting and mellow, voices an unhindered admiration.

This Bollywood blockbuster commonly known as “K3G” plays a supporting role in HEX, appearing at key junctions. This is one of the film’s more playful dances, featuring, as noted in the novel, some impressive pleather bodysuits. “Soniya” means darling, and while most of the song is sung in Hindi, the phrase “you are my soniya” is sung in that multi-lingual English-Hindi mix. Nell is introduced to the film by her best friend Mishti, and in watching this dance falls into a trance on Mishti’s couch.

More elaborate and climactic, this major musical number serves as a highpoint of both K3G and a dinner party in HEX. Its grandeur and ecstatic choreography provide an outlet for the bubbling tensions and suppressed emotions roiling under the table. Nell and Mishti, having watched the dance countless times, find that it comes to their aid when no simpler speaking suffices.

Nell is referencing Robyn’s “Protect yourself ‘cause you’ll wreck yourself / In this cold hard world, so check yourself” when she rhapsodizes on tortellini. I’ll stop there, because it’s one of my favorite mash-ups in Nell’s mind.

Cookie Monster’s classic provided the structural example behind one of HEX’s most structurally unusual chapters. Nell and Joan push the “is for” construction to its limits.

In this beautiful 1950 Broadway musical (adapted in 1955 into a movie musical starring Frank Sinatra and a singing Marlon Brando), one character answers so many questions with the phrase “nicely nicely, Johnson” that it becomes his name. Nicely and his gambling companion Benny sing this title song in a musical that hovers distantly across Nell’s Midwestern upbringing, occurring to her especially in the forms of the VHS’s cover and the words “nicely nicely, Johnson.”

When Nell is spurned by Joan, she redirects her tireless devotions toward Hildegard, an eleventh century saint and Sibyl of the Rhine. Hildegard is known for her theological, botanical, and medicinal texts, alongside a great collection of choral chants. This sample chant introduces the pure linear thrust of Hildegard’s melodies, and Nell’s century-spanning respect for women of extraordinary grace.

Rebecca Dinerstein Knight is the author of the novel and screenplay The Sunlit Night, and a collection of poems, Lofoten. Her nonfiction has appeared in The New York Times and The New Yorker online, among others. Born and raised in New York City, she lives in New Hampshire.