Largehearted Boy: Ted Rall's Playlist for His Book "Political Suicide: The Fight for the Soul of the Democratic Party"

Ted Rall's Playlist for His Book "Political Suicide: The Fight for the Soul of the Democratic Party" 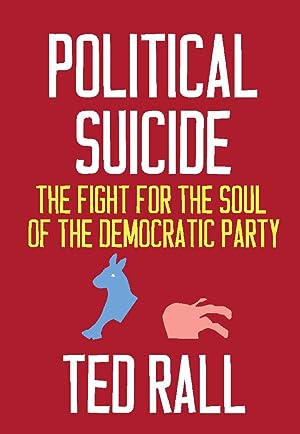 Ted Rall's Political Suicide is a cutting and unforgettable graphic exploration of the fight for control of the Democratic Party.

In his own words, here is Ted Rall's Book Notes music playlist for his book Political Suicide: The Fight for the Soul of the Democratic Party:

Obviously music is important to me. Isn’t it important to you? I hated Ronald Reagan but what really freaked me out about the Gipper was something I read in a 1980s article about the White House record collection. A White House spokesman told, I think it was Rolling Stone magazine but I could be wrong, that the president and the first lady did not enjoy music. Declaring ketchup to be a vegetable is one thing; not knowing how to understand or enjoy music makes you some sort of evil space alien we should all shun.

Jimmy Carter, I seem to recall, wore out Never Mind the Bullocks.

Anyway, Political Suicide is a historical rumination on the split between leftist progressives and corporate centrists fighting for control of the Democratic Party for as long as most of us have been alive. Like everything else, music is political and not just overly so. It defines who we are and, to an even greater extent, especially when we are young, the music that we don’t like defines what we are not and that is more important.

A word of warning: at age nearly 57, my tastes lean heavily but not exclusively toward the punk and New Wave and synthpop of the late 1970s and early 1980s and music that is either derives from that or related to it. If you hate that stuff, that’s fine. Your hatred will define you and, as FDR famously said about the ruling classes, it will define me as well.

The Clash, “Liar”
No rumination about politics would be complete without an angry rant about those who fib like they breathe. This early ditty about a punk boy dismayed to find his would be punk girlfriend at London’s legendary 100 Club nevertheless also serves as a searing indictment of lying sacks of shit everywhere.

TV Smith, “In the Arms of My Enemy”
After his also-ran punk band the Adverts closed up shop in 1979 – they were best known for the novelty track “Gary Gilmore’s Eyes”—TV launched one of the most unjustifiably obscure solo careers in rock history. He has turned out a dozen or so brilliant collections of melodic fuck post punk that only the most well-connected and obsessed have any interest in. Political Suicide is in large part an explanation of why the Democratic Party breaks liberal hearts. This song is about that realization that you are being used coupled with the horror that you don’t know if there’s anything you can do to make it stop.

The Wanderers, “The Times They Are A Changing”
Fronted by arguably the rockiest voice in rock ‘n’ roll, maniacal Clevelander Stiv Bators, the Lords of the New Church epitomized melodic post punk in the early 1980s: bombastic, Gothic, sinister, unapologetically furious. Before the Lords came together, Bators cobbled together a one-off partnership between himself as lead singer and all the members of Sham 69 (“Borstal Breakout”) who weren’t singers. The album that resulted is an obscure treasure whose brilliance shines in this cover of Dylan.

Yaz, “Don’t Go”
You couldn’t find a dance floor in 1982 without the 12-inch version of this thing blasting away, and that was a good thing. In context of this book, think of it as a plea to progressive voters from a Democratic Party that wants their votes without giving them anything back in return. When someone is screaming at you not to go, any doubt in your mind should probably go straight out the window. You’ve got to get the hell out of that place.

Wreckless Eric, “Take the Cash (K.A.S.H.)”
Best known for “Whole Wide World,” Eric née Goulden added this to his early repertoire as something of a throwaway anthem about how to handle money you get from the record company. Here I think it’s an appropriate double entendre. Taking the cash is exactly what the Democratic National Committee does every time they shake voters down for money. “We will fight for you! Donate!” the letters say. But they never do. For voters, the message is metaphorical. No one is offering you any cash. But the least you can do is hold out for the next best thing, substantive left-leaning policy.

Paul Kelly, “Special Treatment”
Singer songwriter Kelly is from Australia and this song is about that continent’s woeful mistreatment and abuse of indigenous people there. He sardonically references the conservative right’s complaints about Australian affirmative action by delineating the oppression inflicted on just one family line. So what the hell does this have to do with the war for the Democratic Party? This is the kind of oppression that the Democrats are supposed to be interested in putting it into right here in the United States, yet they never do. They haven’t bothered to present an anti-poverty plan since Lyndon Johnson was president, much less actually pass one.

The Lovemakers, “Prepare for the Fight”
There’s no getting around it: progressives will never get control of the Democratic Party unless they’re willing to do some serious battle to take over that rotten institution.

T.S.O.L., “American Zone”
Safe in the American zone… that’s us. Even many so-called liberals turn a blind eye to the misery caused not just by evil Republicans but also by Democratic members of Congress and President who either go along with Republicans and their wars or start their very own in order to prove that they are tough, or just in order to provide their defense company contributors with business. This is a powerful statement against militarism by a band that was often dismissed as trivial SoCal surf punk back in the 80s.

The Seeds, “Can’t Seem to Make You Mine”
OK, so this is classic 1960s psychedelic garage rock, but it’s also the ultimate paean to frustration. Boy meets girl, boy wants girl, girl doesn’t want boy, boy is sad. Bernie Sanders progressives want more than anything for the DNC to love them, but they never will. They will never ever make that party theirs.

Patty Smyth, “Goodbye to You”
“I Am the Warrior” is the one that gets the plays but this is the one that truly rocks. Richard Hell’s ex-wife rocks the farfisa in the ultimate fuck-off-and-die rock song. How does this apply to the Democrats? You know.

Twice the winner of the Robert F. Kennedy Journalism Award and a Pulitzer Prize finalist, TED RALL is a political cartoonist, opinion columnist, graphic novelist and occasional war correspondent whose work has appeared in hundreds of publications, including the New York Times, Washington Post, Village Voice, and Los Angeles Times. He is the illustrator of the full-length comic in Billionaires & Ballot Bandits: How to Steal an Election in 9 Easy Steps, written by Greg Palast.