Yuval Taylor's Playlist for His Book "Zora and Langston" 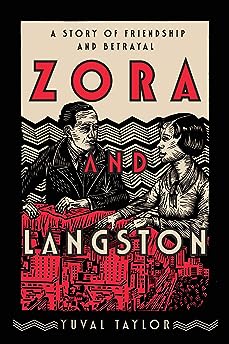 Yuval Taylor's Zora and Langston captures the lives of two of the 20th century's greatest writers in this fascinating book.

"Taylor has created an intimate portrait of two luminaries of American literature against a backdrop of the cultural, political, and economic forces that influenced them."

In his own words, here is Yuval Taylor's Book Notes music playlist for his book Zora and Langston:

Zora Neale Hurston is the author of the single most widely read book ever written by an African American (Their Eyes Were Watching God) and Langston Hughes has been called “the most prolific and influential African-American writer in our history.” Collaborators, social and literary gadflies, and very close companions, they worked together on a magazine called Fire!! and a comedy called Mule Bone, wrote scores of letters to each other, and traveled together through the South. Yet they had a terribly bitter falling out, which one scholar has termed “the most confounding and fascinating literary breakup in African American cultural history.” In exploring their relationship in my book Zora and Langston: A Story of Friendship and Betrayal, the music they listened to in the 1920s and ’30s helped me immerse myself in that period.

We’ll start in 1921, the year Langston Hughes first visited Harlem. “Royal Garden Blues” is an example of the kind of tune he might have heard then. People always say jazz was born in New Orleans. They’re probably right, but it flourished in Harlem, and this song is the very first instrumental jazz composition recorded by some of Harlem’s greatest players. The last few choruses of this anarchic record probably feature more collective improvisation than anything recorded before. Yes, there were a few great pre-1921 jazz records, but they were relatively tame by comparison. Despite the label, this is really Perry Bradford’s band. (Bradford was the Harlem genius who put together and recorded the first black blues vocal record, Mamie Smith’s “Crazy Blues,” in 1920, thus revolutionizing the music industry.) Mamie Smith’s name was just put on “Royal Garden Blues” to sell records.

Three years later, Langston was back in Harlem to attend an NAACP benefit dance at Happy Rhone’s nightclub on 143rd and Lenox featuring performances by Florence Mills, Alberta Hunter, Noble Sissle, Bill “Bojangles” Robinson, and Fletcher Henderson and his orchestra. Maybe he heard the latter band perform “What-Cha-Call-’Em Blues,” one of their greatest numbers, recorded in 1925.

Langston first met Zora Neale Hurston on May 1, 1925, at the Opportunity Awards Dinner at the Fifth Avenue Restaurant in Manhattan. A few weeks later, Langston wrote their mutual patron Carl Van Vechten, “Zora Neale Hurston is a clever girl, isn’t she? I would like to know her.” In the same letter, he tells Van Vechten that he prefers “moanin’” blues like Clara Smith’s new record “Nobody Knows the Way I Feel This Morning.” Wait for the last line: “I could skin you quicker than an express train.” Fletcher Henderson is on piano; Louis Armstrong is on cornet.

Langston, Zora, and Van Vechten all idolized blues singer Bessie Smith. Langston wrote a song for her in 1925, saw her perform several times, and listened to her records more than those of any other musician. He first met her backstage in Baltimore in 1926, and then in 1927 he and Zora hung out with her in Macon, Georgia, where they all stayed in the Colonial Hotel; meanwhile, Smith was a frequent drunken guest at Van Vechten’s dicty parties. Smith wrote “The Soft Pedal Blues” (1925) about attending a Harlem party, and it’s one of her most autobiographical numbers. Langston loved it, calling it “a wonderful reproduction of the atmosphere of a buffet flat [a speakeasy] at four in the morning.”

Zora soon introduced Van Vechten to black church music. As Van Vechten wrote in his diary in May 1926, “After dinner Zora takes us to a sanctified church in a real estate dealer’s office, where there is shoutin’, moanin’, yelling during & praying hours on end to the music of a cornet & guitar & jumping & dancing.” Zora didn’t have much patience with the sterilized “spirituals” presented at concerts; she preferred the kind of preaching that was immortalized in records like “Death Might Be Your Santa Claus” (1926).

At the same time Langston was writing blues lyrics like there was no tomorrow, and he published a good parcel of them in his second book, Fine Clothes to the Jew (1926). None of these lyrics were actually recorded, unfortunately. But the lyrics to Blind Willie McTell’s “Stole Rider Blues” (1927) have a lot in common with Langston’s, which were derived from songs like this.

Ethel Waters’s version of “Underneath the Harlem Moon” (1933) encapsulates, for me, the complicated relationship of black and white culture during the Harlem Renaissance. The song was originally written by a Polish Jew named Morris Gitler, who changed his name to Mack Gordon when he came to New York in 1908, and the lyrics were pure racist malarkey. It was a hit in 1932, with at least eight different recordings by various artists (most of them black). But what Ethel Waters, who was a good friend of Langston and Zora, did with it was remarkable: she completely rewrote the lyrics. The second half of the song is entirely her own, and in the first half she changes many of the most important words (“darkies” becomes “schwartzes,” for instance). Waters was signifying on a white folks’ song, making it her own—and adding whole new shades of meaning. (Yes, that’s Sammy Davis Jr behind the judge’s bench.)

On July 27, 1927, in Mobile, Alabama, Langston got off a train from New Orleans and fortuitously bumped into Zora on St. Joseph Street. They decided to explore the South together in Zora’s little old Nash coupe, nicknamed “Sassy Susie.” And the first thing they did after leaving Mobile was spend a couple of weeks at the Tuskegee Institute, famous worldwide at the time as the home of the Tuskegee Singers. This performance by the Tuskegee Institute Quartet would have had special meaning for Langston, who had been impressed by a performance of “I’ve Been Buked and I’ve Been Scorned” he heard in New York in 1925. The song had been first transcribed by Hall Johnson, a black composer who would soon be financially supported, like both Langston and Zora, by the wealthy white “Godmother” Charlotte Osgood Mason.

Zora and Langston heard plenty of music while traveling together in Alabama and Georgia, and some of what they heard might have sounded quite like “Wicked Treatin’ Blues” (1929). On the other hand, they might also have thrilled to comic numbers like “Keep It Clean” (1930). I think Zora would have loved to have penned a line from the latter: “Your sister was a tabby, your daddy was a bear, put a muzzle on your mama ’cause she had bad hair.”

I don’t know if Zora first heard “Po’ Boy Blues” (here performed by Ramblin’ Thomas in 1928) on that trip, because she made lots of trips down South in those years. But she performed it herself later (as “Po’ Gal”), along with a number of other numbers she collected. I’ve included on this playlist about half of the recordings she did for Alan Lomax in 1939. Her soprano voice is striking and effective, especially for a 48-year-old. Zora probably performed “The Crow Dance” for Charlotte Mason in 1930, but I’ll bet you she didn’t perform “Uncle Bud,” which would have shocked Mason with its profanity.

One of these songs she also used in a series of skits she wrote for a Broadway revue in the late 1920s. I’ve included not only her version of “You May Leave But This Will Bring You Back” (which she called “Halimuhfack”) but also that of the Carolina Peanut Boys (1930), who had nothing to do with Carolina—this was an alias for the Memphis Jug Band.

Zora and Langston broke up in 1930 and 1931. The break-up was attenuated, acrimonious, and terribly dramatic; much of it happened over a series of letters. Letter-writing plays such a huge part in my book that I wanted to include one of the best songs I know of on the subject, “Writing Paper Blues” (1927), written and performed by Blind Willie McTell, a man who could neither read nor write. (Another great letter-writing song which I didn’t include in this playlist is P J Harvey’s “The Letter.”)

I didn’t include any of Langston’s own performances of his work because they’re somewhat disappointing. Instead, I’ve included one of Martin Luther King’s performances of “Mother to Son” (it was a great favorite of his). So that you can separate what King says from Langston’s words, the poem begins “Well, Son, I’ll tell you” and ends “Life for me ain’t been no crystal stair.” King appends his own poetic lines to the end.

As for Zora, she has inspired any number of great writers and performers, but the one who might capture her essence best is Erykah Badu. If Zora had been a songwriter in the 1990s, I think she would have written something like “Appletree” (1998).

Yuval Taylor is the coauthor of Darkest America: Black Minstrelsy from Slavery to Hip-Hop and Faking It: The Quest for Authenticity in Popular Music. His writing has appeared in the Guardian, the Antioch Review, the Oxford American, and other publications. He lives in Chicago.