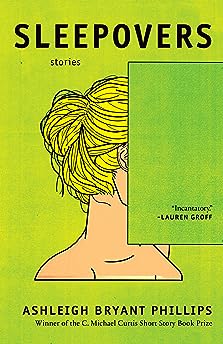 The New Yorker wrote of the book:

"The lives of Phillips’s characters transform with startling quickness, and a kind of presumed violence is omnipresent―yet everyone here is still trying to do their best. The music of her literary predecessors (Larry Brown, Carson McCullers, Flannery O’Connor) is present in Phillips’s sentences, but what’s most remarkable about her writing is its generosity. Even when they’re fucking up or making bad decisions or metabolizing deep grief, these characters are full and rich and gloriously recognizable."

In her own words, here is Ashleigh Bryant Phillips's Book Notes music playlist for her debut novel Sleepovers:

I love music. I love singing. I grew up singing in the church. A small church, across a swamp bridge, outside of Woodland, North Carolina. And as a child, my favorite movie was Fantasia, a film made of animated segments illustrated to classical music. There is no talking really, all communication is conveyed through sounds and corresponding images. So I made this Sleepovers playlist with that premise, with the stories as images and these tracks as their sounds.

This plays at the beginning of the story. I think it works really well with the image of little girl Shania firing a gun. I love how the claps and stomps pick up in power. And the track ends when the narrator slams shut the history book of the town, where she sees an old picture of Shania’s house, and how it used to be painted robin’s egg blue.

*I listened to “The Screens” by Atlas Sound while writing Shania.

This plays while Charlie Eliott walks around town, selling his office supplies. While he’s catching rides to Virginia selling office supplies. As he meets his future wife, sitting alone in the sun room filled with plants, drawing birds. This plays when they get married and have sex. And it ends as Charlie writes down that scripture from Colossians, and puts it on the fridge.

The reader doesn’t know this, but Maddy’s daddy loves Beach music. A Carolinian regional genre that’s built around Carolinian shag dancing. Mostly a variation of the swing that became popular in North Carolina and South Carolina beach towns in the 1950’s-1960’s. “Stand by Me” is a standard in the Beach Music repertoire. This plays while Maddy and her daddy are in the kitchen together. I should have written a scene in Mind Craft to show them shagging in the kitchen to this.

*Maddy mentions how wonderful the Minecraft game sounds to her. The ambient meditative soundtrack was composed by Daniel Rosenfeld (C418).

This starts playing as Krystal takes those beautiful dives off the diving board, over those sad and sweet opening notes. And then at 1:05 the music shifts when Krystal takes Shirley’s locket off and Norma appears. “Always Lovers” plays through to when Shirley’s alone in bed. The song ends and then there’s a final scream from Shirley’s mother.

*“She’s in love with the boy” by Trisha Yearwood is plays while Krystal is diving in the written version of the story.

This cues on pages 38 and 39 of Sleepovers. As the narrator sees her little sister for the first time in that big ol bed, being swallowed by pillows. As she remembers her little sister kicking her in her sleep, as she covers her sister’s lampshade with Junebug shells. And as the two of them together scrape that castle by the ocean painting with their little fingernails clawing happily.

*Apparently “anjos” is “angels” in Portuguese.

“In The Garden” Sister Rosetta Tharpe
An Unspoken

Back home, this is a special hymn that everybody loves for funerals. This version by Sister Rosetta Tharpe is my favorite. It starts right at the end of “An Unspoken” as Miss Clara closes her eyes and bows her head.

*The hymn “Jesus Loves The Little Children” is sung at Clara’s son’s funeral in An Unspoken.

This plays as Donnie sits in the Duck Thru parking lot, the rain coming down, him counting the teeth on his Grizzly case. As he drives out to the pond. While he stays up drinking after Melissa leaves during the big thunderstorm. As he stumbles through the soggy yard to find the bones from his bass.

“Abide With Me” Thelonius Monk Quartet
The Bear

Thelonius’s take on this traditional hymn standard sounds like you’re receiving some enlightened message from the universe. This starts playing as soon as Abner kicks the bear in the face and it stops as he holds his trembling younger sister at the end of the story.

* Thelonius Monk was born in Rocky Mount, North Carolina. When my family went to the mall or the hibachi grill, we went to Rocky Mount. When Monk was born there is/was home to a thriving tobacco market and one of the largest rail yards in the South.

*Actual hymns sung by Abner in “The Bear” are “Nothing but the Blood of Jesus” and “Are you washed in the blood?”

Lorene dreams of one day visiting Central and South America, she’s particularly interested in the ancient history there. This recording from the Pipil people of El Salvador begins with tiny bell dinging. That dinging opens this story, with Lorene laying there underneath that sweet betsy bush, arriving in Rocky Mount, seeing the fluttering moth at supper and it plays until the end of the story, when Lorene’s an old woman cleaning hotel bathrooms.
*My friend Rachel Castro, translated the lyrics for me. 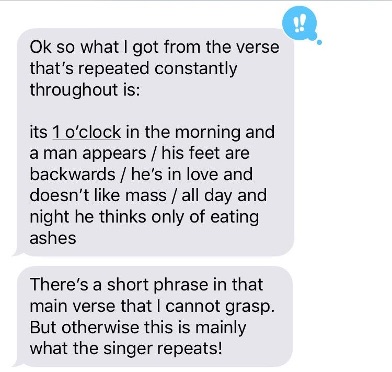 This plays while the narrator and Courtney push the hotel elevator buttons, pull gummy worms out their mouths on the beach, take pictures at the aquarium with sharks, roll up their short legs, and watch the jacuzzi bubble up.

*The Ying Yang Twins song “Get Low” is sung by Courtney in the story.

You walk into the ABC store and the saleslady says…

This medley blends two hymns that Miss Ann Ruby knows by heart, one of which is mentioned in the story. This plays as Miss Ann Ruby emerges from the boot of her car after being beaten and it plays as she picks trash up out of the ditch outside The ABC Store.

“Banana A” Banana
The Mattress

This plays through “The Mattress.” With the addition of more and more instruments accompanying the narrative moment between the characters and their mounting fears and desires. When the sustained saxophone notes comes to bring an end to the piece, I see Dale driving into the tall grass, looking for the trailer of Mrs. Creech’s son.

This song plays while Amy walks home from work on the side of the highway, while she’s looking at her squirrels in their fairytale dresses, while she’s picking Cup O’ Noodles out the carpet.

*I listened to Blood Orange “Best To You” ft. Empress Of while writing this. Resonated with the lyric “I can’t be the girl you want but I can be the thing you throw away.”

This plays when the narrator smells the insides of flowers from far away, runs through the fields, while she eats apples and soybeans. Coltrane’s harp is so mesmerizing here, wild and free-form but also on a loop, in a trance. Works well with this reincarnation story.

*In Sleepovers, Snowball Jr. concludes with a reference to Debussy’s “Prélude à l'après-midi d'un faune” and everyone ought to go listen to it while they’re laying down in bed or a nice spot of grass.

This is Joyner Lee’s song after she gets ghosted. It plays while she runs through the fields behind the hunting lodge.

“Teach Me To Forget” Jonny Adams
The Virgin

This plays as Lacy drives to Norfolk, while the fields fly by her and the rain beats down. While she tries on lipstick at the Dillard’s makeup counter, while she walks around the art museum. As Lacy puts on dry clothes at the nursing home memory care unit and sees the former resident’s name written inside the collar. As Lacy is happy eating dinner with the memory care unit residents.

*As it’s written in Sleepovers, “When Doves Cry” by Prince plays as Lacy drives to Norfolk.

This cues right after the narrator hears Miss Katie say 7UP cake is some “country shit.”

“The Poor Orphan Child” The Carter Family
The Chopping Block

This starts playing as the narrator drives out to her family’s graveyard at night, as she smokes weed against the gravestones, as she breaks into the house, as she shreds a rotisserie chicken on top of the chopping block, as her neighbors take her by the hand and drive her home.

*While I didn’t grow up singing this song, it’s indicative of how folks sang in my church, with simple harmonies. The tune is likely derived from the Great Depression. One in five people from my home (Northampton County, NC) live in poverty. And the county has little to no access to quality education and healthcare. Based on a Community Health Assessment taken in 2015, 30% of Northampton County disagreed that Northampton County, NC was a good place to raise children while 27% agreed and another 27% had no opinion.

*I was obsessed with “In Dreams” by Roy Orbison while writing The Chopping Block. I called my first draft of the story In Dreams. The night Sleepovers came out I got my pal Kate Rhudy to sing it to me and now I don’t care for the Roy Orbison version anymore.

Ashleigh Bryant Phillips is from Woodland, North Carolina. Her debut collection, Sleepovers, won the C. Michael Curtis Short Story Book Prize. Stories from it have appeared in The Paris Review, The Oxford American, and others. She has an MFA from the University of North Carolina, Wilmington.