Largehearted Boy: Emily Temple's Playlist for Her Novel "The Lightness"

Emily Temple's Playlist for Her Novel "The Lightness" 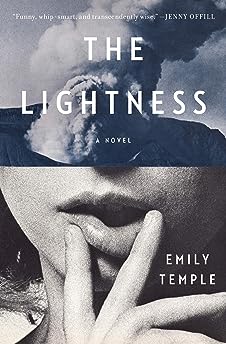 Emily Temple's novel The Lightness is a starling and beautifully written debut. Dark and wonderful.

"A complex, psychological study of a young woman haunted by her past—and her capacity to hunger for violence and self-destruction . . . A dark, glittering fable about the terror of desire."

In her own words, here is Emily Temple's Book Notes music playlist for her debut novel The Lightness:

“Anthems For A Seventeen Year-Old Girl” by Broken Social Scene

Nothing says listless, long summer evenings filled with teenage desire to me more clearly than the fuzzy art-house angst of Broken Social Scene, which soundtracked so many of my own. (You Forgot It in People came out two days after my sixteenth birthday, and I’ve always considered it a particular gift.) Probably this is why I couldn’t help but quote directly from this song early on in The Lightness:

"The girls in these photographs were the kind that people wrote songs about. This was the kind of life that American teenagers were meant to live. Park that car. Drop that phone. Sleep on the floor. Dream about me."

My editor went to go see BSS in the park last summer, and sent me a pin that says “Rotten One” which is now always secured on the collar of my favorite denim jacket. If I didn’t know before that she was the right editor for this book (I did), I would have known it then. See also: the entire rest of this album.

The passage quoted above also used to quote from this song, but I wound up cutting it, on the basis that it was just too much—or at least too on the nose in a novel that includes a cultish group of mysterious girls, who are often standing around together being looked at, and just as often looking back. It’s another song that simply feels like being a teenager to me, but also, the lyrics: The boys are in a band together./ The girls all fucking stand together./ The cooler kids’ll keep together. I do love it, though. The most universal concept told in the simplest way. The cooler kids will live forever, man.

“The King of Carrot Flowers Pts. 2 & 3” by Neutral Milk Hotel

As one character explains to my narrator, “there is nothing in the world quite as mind-blowing as driving over a mountain, totally stoned, as the sun comes up and “The King of Carrot Flowers, Pts. 2 & 3” plays on the stereo (not Part 1, she was sure to make clear; Part 1 is just a pop song).” I will say only that I have my high school boyfriend and his shitty car and the hilly roads between our parents’ houses to thank for this image. And that personally, I also love Part 1.

Is this not the essential beating heart of every piece of literature? It’s the heart of this one, anyway.

“Your Ex-Lover Is Dead” by Stars

Usually I hate it when songs open with talking, but this one starts with the motto of every teenager who wants more from life but doesn’t exactly know what that more might be: “When there’s nothing left to burn, you have to set yourself on fire.” And then it just gets better from there. A song to close your eyes and raise your arms to.

If I were a teenager now, this is probably what I’d be playing on the stereo as I drove around this summer, one hand on the wheel, one hand out the window, sunglasses as big as my head, nothing to do but look for trouble.

“If She Wants Me” by Belle & Sebastian

Truth be told, this is a little bit too musically upbeat to really feel like this novel, but I had to include it, because at the risk of being corny, the last verse is the most perfect and poetic thing ever written about the unknowability of other people: “I took a book and went into the forest/ I climbed the hill, I wanted to look down on you/ But all I saw was twenty miles of wilderness so I went home.” Somehow it also applies to how it feels to write a novel.

We’ve reached the nighttime portion of this playlist. This song makes me think of drinking whiskey in the dark, and of the kind of party that shifts halfway through from something sleepy and mundane to something strange and sparkling.

Driving in the car at night with my friends, this was the song I was most often asked to turn off. I understand: it’s so creepy and sexy at once that it almost itches when you hear it. But this is a novel about a group of girls who dream of being wolves, and a novel about a group of girls who have been hurt by their fathers, and a novel that lets itself be led around by the sound of words, and this song is all those things too.

Possibly the sexiest song on the planet, and one that correctly associates levitation (this is how I interpret all the “being high”, though I realize there’s another reading) with sexual transcendence.

“I Put a Spell on You,” by Screamin’ Jay Hawkins

The other sexiest song on the planet, and appropriate for a novel in which menstrual blood is used in a love spell, though I don’t know that any of the characters are quite cool enough to actually listen to Screamin’ Jay Hawkins. Maybe Janet.

Careful readers will notice that this is Luke’s favorite song. This is probably his finest quality. In college, my best friend and I started a music magazine, and the first email we sent out to invite submissions had the deeply insufferable subject line “Congratulations, you know how to spell Elliott Smith” . . . which is probably why I now associate Elliott Smith with pretentious assholes, even as I continue to love him forever. A good end of the night song, regardless.

Bonus track: “Walk Through the Fire” from the musical episode of Buffy the Vampire Slayer

Okay, listen. There are multiple references to Buffy the Vampire Slayer in this novel, and not only because I love it, but because it strikes the perfect balance between serious and silly, irreverent and satisfying, highbrow and deliciously low. I couldn’t have written this novel without it as my model.

Emily Temple holds a BA from Middlebury College and an MFA in fiction from the University of Virginia, where she was a Henry Hoyns fellow and the recipient of a Henfield Prize. She is a senior editor at Literary Hub and lives primarily in a queen-sized bed in Brooklyn. The Lightness is her first novel.