Guillermo Stitch's Playlist for His Novel "Lake of Urine" 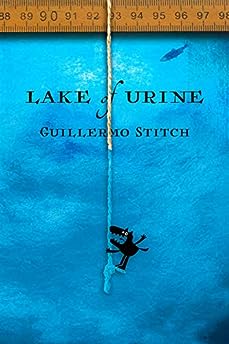 Guillermo Stitch's novel Lake of Urine is funny, dark, and entertaining on every page.

Anne Cunningham of the Irish Independent wrote of the book:

"A fantasy, a social commentary, a family history, a love story, Lake of Urine thumbs its nose at any attempt to describe it coherently. But this is its charm. The reader is simply immersed in a series of outrageous pastiches and as the drama reaches fever pitch it is then boiled down to its essence: that so much of the meaning in our lives is meaningless. Guillermo Stitch is Irish and it can't help but seep through. From Swift to Wilde to Beckett, if you're looking for them you'll spot them. Winking. I imagine it's in approval."

In his own words, here is Guillermo Stitch's Book Notes music playlist for his novel Lake of Urine:

There is a small installation just opposite our kitchen window (which, mostly, we must have open) that bears the logo of the country's principal telecoms provider. I would call it a telephone exchange but I'm not sure if such things still exist. Data plant? Anyway, it apparently constitutes a threat to the mental health of the residents on our little street. It beeps.

Constantly. The woman across the way has written to The Authorities and so has K, my wife—she also makes daily verbal representations to Yours Truly though I've no idea, and she has not explained, what she expects Yours Truly to do about it.

I am complacent. I live in a world where there is no beep, having self-administered a significant loss of hearing at just those higher frequencies where it would intrude.

Loud clubs, live shows and, above all, earphones have, for me, completely eliminated the problem of the beep. Though I cannot live without music, I also cannot say that my relationship with it is a healthy one. But I have enjoyed making these selections. The nature of their connection to the book is a mixed affair. Some express an idea that I believe, perhaps with some licence, also suffuses my work; others are candidates for the imaginary soundtrack of the (as yet) imaginary movie.

1) Charles Ives, The Unanswered Question, New York Philharmonic Orchestra, Leonard Bernstein
Few composers say “America” to me like Charles Ives, and few countries say “possibility” to me like the US. I almost chose Central Park in the Dark, since Big City is such a totem in the novel, but this piece insisted itself. If the topology over which my characters move is the crystalline, criss-cross structure of contradiction and reversal, then this is one of the book's substrata—the eternal sigh, the wish not granted, the unanswered question. But also: the unextinguished life, the undaunted, the unbowed. Life itself—the life force—expressed in terms of suspension, as opposed to resolution. This one certainty iterated in a language of doubt.

2) Kristin Hersh, Down in the Willow Garden
Where does the book begin? Are we in Appalachia? Rural New England? Rural old England? It shifts for me, occasionally resolving for just a moment—only for the resolution to dissipate, morph into the next clarity, drift onto the next. A mist, a cloud of clarities. Hersh has a shifting voice that can evoke glee, longing, loss and rage, sometimes in the course of a syllable. But with the Appalachian songs she takes her time, and there is a clear stillness.

3) Stravinsky, Concerto in D, Arioso. English Chamber Orchestra, Colin Davis
A fuss was made of this in a Woody Allen film—I can't remember which—and I was annoyed. Not because of any controversy attached to the filmmaker, about which I will say nothing here, but because I foolishly thought it my secret. It's a serenade for Noranbole and Bernard, my story's lovers—but dizzy and disjointed and necessarily so for the unlikely heroes of a fucked up fairytale.

4) Aphex Twin, T69 Collapse
There's a shape to this track that I wanted for the book. A degradation, a grotesquery, that resolves into something more optimistic and joyful than we might have expected.

5) The Carpenters, Close to You
It seems to me The Carpenters were at their most fearless when Karen Carpenter sang of bliss. Top of the World would be another example, and could easily have made this list. They didn't mess around. Bliss, for them, was bliss—served straight up, no ice, no bitters, no tincture of irony, not a drop of sadness. They kept all that for separate songs. Noranbole and Bernard have enough to put up with in the world into which they have been dropped. So when they experience bliss, I wanted it to be total. This song reminds me of a scene they share, very close to the end of the book.

6) Arvo Pärt, Cantus In Memoriam Benjamin Britten, Estonian National Symphony Orchestra
I've been listening to this piece for over thirty years. It is just over six minutes of something that could be flight but feels, in my stomach at least, more like a long, long fall—a plummet through the kind of vastness we need to dream to apprehend, because if we couldn't wake from it, it would obliterate us. Beauty is nothing but the beginning of terror, wrote Rilke, and he could have been writing of the Cantus. And yet, when the bell that has tolled throughout provides the final cadence, we are not obliterated—everything is at it ought to be. One of the book's motifs is that notion of a natural justice we call karma, or comeuppance, or just deserts. The idea that events unfold as they must, because they must. And that it might be possible to accept this as benevolent, and not terrifying.

7) Michael Nyman, An Eye For Optical Theory
Nyman's music—epitomised by this piece—can sound cerebral, arch, the embodiment of classical proportion and architectural grace. And yet, somehow, nuts. Hence this selection—Willem Seiler is mad and bad, but he deserves a tune. The qualities listed in the first sentence are what he wants to be. The quality in the second sentence is what he is. I think Nyman has been at his best when scoring the films of Peter Greenaway. An Eye For Optical Theory is from The Draughtsman's Contract. Greenaway's art made a deep impression early on and I am sure has seeped into my own in all sorts of ways. One is obvious—when I picture Seiler rowing out to the middle of the lake to plumb it, it is a wide shot, stationary and classically proportioned, and devoid of action until the boat, tiny on the screen, breaches the frame at bottom left and makes its way, slowly, to the exact centre. Music by Nyman.

8) Peter Drake and his Talking Steel Guitar, Forever
Music for the final credits. It is a comfort that at least some of the aspirations I have for my book have precedent. Forever is unabashedly strange in ways which I suspect are only partly deliberate, perhaps a little 'outsider', certainly singular and not for everyone. But there is also, to these ears anyway, something lovely about it, and it has something to say about love.

Guillermo Stitch is the author of the award-winning novella, Literature™. He lives in Spain.