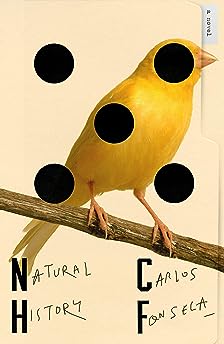 Carlos Fonseca's novel Natural History is an original and genre-defying work. One of the year's best books.

Pubishers Weekly wrote of the book:

"Fonseca’s inventive, complex tale reads like a literary onion, constantly revealing new narratives and layers of meaning . . .The various characters’ perspectives blur the line between memory and fantasy, and their charm will keep readers along for the very intricate ride. Fonseca’s innovative puzzle box of a novel packs a powerful punch."

In his own words, here is Carlos Fonseca's Book Notes music playlist for his novel Natural History:

People often associate reading with silence. One opens a book, they say, to shut off the noise of the outside world. In some sense it’s true, but I often tend to think that the contrary is also the case: one opens a book to hear a different type of music. Every book establishes its rhythms and its harmonies. Reading a book is more akin to hearing music with headphones. One is simultaneously both part of the world and outside of it. That might be why I often spend a good half hour listening to music before beginning to write each morning. Natural History, in particular, is a novel that abounds with different rhythms and attempts to harmonize them.

Here are some of the songs that helped me while writing.

Natural History is a story about variations, about camouflage, about repetitions and differences, about originals and replicas. In that sense, Reich’s serial variations work perfectly with its topics. Different Trains moves forward by a game of echoes and harmonic variations that reminds me of the structure of the narrative. Something about the song also suggests a resolution or a revelation that never fully arrives, as in the case of the story of Giovanna Luxembourg and her family.

One of the central protagonists of my novel is Subcomandante Marcos, the famous masked leader of the Zapatista movement in Chiapas. In this song, we hear Marcos’s voice reciting one of his famously poetic speeches—Manifiesto Zapatista en Nahuátl—advocating social equality and justice. I like to think the social concerns of the Zapatistas and of Marcos serve as the novel’s ultimate backstory.

Yoav Toledano, one of the main characters of the novel, arrives in New York in the 1960s from Israel, to discover in the streets of the big city the rhythms of an emerging musical genre: salsa. The Fania All Stars—which counted among its ranks stars like Hector Lavoe, Celia Cruz and Cheo Feliciano—was soon to become synonymous with New York salsa, and “Anacaona” remains one of their classics and a personal favourite. The Fania All Stars famously performed in the Soul Power music festival as part of Ali’s and Foreman’s Rumble in the Jungle fight in Zaire.

In the central part of the narrative, the action moves from New York to Puerto Rico, where one of the characters is undergoing trial for a group of actions she considers to be art. That section has a different vibe: much closer to the island rhythms I grew up with. In this sense, Ismael Rivera’s famous Las Tumbas works perfectly, as it is one of the island’s classics and a reflection upon his time in prison.

Never far away from Ismael Rivera in my own playlists, Miles Davis’s Pharaoh’s Dance played a special role in the writing of this book. The song, with its twenty minutes of subtle variations and fragmentary harmony, helped a great deal while I was trying to weave together the narrative. In this song Miles shows that harmony can come from fragmentation and that unity is always complex. From songs like this, a writer can also learn when to speed things up and when to slow the narrative down.

I first encountered the figure of Glenn Gould through literature. It was reading Thomas Bernhard’s The Loser that I first heard of his genius and his eccentricity. In a way many of the characters of Natural History resemble Gould in their eccentricities and their isolation. The Goldberg Variations remain one of his masterpieces and a piece that I often listened to while writing, in an attempt to slow down the story.

Natural History is, at the end of the day, the story of a family that decides to go into the Latin American jungle in search of some spiritual experience. Tired of their frivolous celebrity life, they are looking for something deeper. The Puerto Rican group IFÉ, with their mixture of Afro-Caribbean rhythms, often gives me the same sensation: their songs are always in search of something else.

I could say something similar of Zapata se queda. Including the amazing voice of the iconic Totó La Momposina, who famously performed at García Márquez’s Nobel Ceremony, this song shows the type of hybrid style that has become characteristic of Latin American music nowadays, a mixture of old and new rhythms whose hybridity we also find in the new Latin American narratives.

Fire is a big protagonist in Natural History: from the presence of underground mine fires to William Tecumseh Sherman’s scorched earth strategy, fire becomes one of the great fascinations of the characters of the novel. In one of its pages we even encounter a drunken writer who imagines a whole novel where fire would be the sole protagonist. In this sense, it would seem appropriate to finish with Bomba Estéreo’s Fuego.

Carlos Fonseca was born in San José, Costa Rica, and spent half of his childhood and adolescence in Puerto Rico. In 2016, he was named one of the twenty best Latin American writers born in the 1980s at the Guadalajara Book Fair, and in 2017 he was included in the Bogotá39 list of the best Latin American writers under forty. He is the author of the novel Colonel Lágrimas, and in 2018, he won the National Prize for Literature in Costa Rica for his book of essays, La Lucidez del Miope. He teaches at Trinity College, Cambridge, and lives in London.