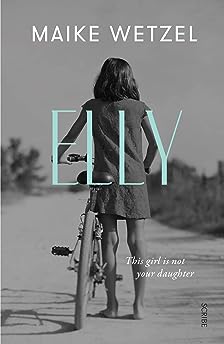 Maike Wetzel's novel Elly is an impressive debut, a coming-of-age story both hoaunting and poignant.

New Books in German wrote of the book:

"Reminiscent of Ian McEwan’s A Child in Time, Elly will have wide appeal…Maike Wetzel’s fresh, original take on the popular literary theme of missing children is delivered in her clear, understated prose with its unflinching eye for detail."

In her own words, here is Maike Wetzel's Book Notes music playlist for her debut novel Elly:

Elly is my debut novel and I am very glad it was published in English in translation by Lyn Marven who has already translated one of my short story collections, Long Days (Lange Tage). The story revolves around the disappearance of an eleven-year-old girl – Elly. And then her mysterious reappearance after four years. First, her family has to learn to live with a gaping hole in their lives. Then Elly returns, but nothing is right. She doesn’t reveal what happened in those four years and seems to have changed in so many ways. Is this really the same little girl who went missing? And if not, who is she?

This story could have been a thriller but really it isn’t. I am far more interested in what’s going on inside the heads of everyone who comes into contact with Elly. It’s a book about the power of longing and about how much our perception is shaped by what we want to see. It’s also a coming-of-age-story and about the small pleasures and horrors of life in suburbia.

I often listen to music while I’m writing. I also listen to the sound of the words – and I write for musical theatre and for the screen, too. I have been collaborating with the composer and guitarist Marc Sinan for over a decade now. So music plays an important role in my life as a writer. My playlist consists of songs I listened to while working on Elly, a couple of songs that are referred to in the book, plus songs that reflect the themes and mood of the book. The mix reveals my own musical coming-of-age in the nineties plus my soft spot for gentle female voices in mellow songs with minimal instrumental backing.

It’s Oh So Quiet by Björk

A song from the mid-nineties, when everything was brightly colored, pretty, and plastic. Elly’s elder sister, Ines, mentions the song in the book as an example of a deceptive calm. I’m not the only person who likes the track. The song was Björk’s first big hit – and she hated how successful it was. Because “It’s Oh So Quiet” is a cover. The original (from 1948) was by Betty Hutton and was called “Blow a Fuse.” Spike Jonze directed a charming retro-style musical in the video for Björk’s version. Apparently Björk had a terrible cold during filming and was only able to whisper.

Eye of the Tiger by Survivor

The only eye witness to Elly’s disappearance is listening to this song on the car radio – no wonder she is hardly aware of everything else going on around her. “Eye of the Tiger” is a typical “earworm” (a term borrowed from the German!) which still gets people singing along today. And it’s a film reference too: it’s the title song of the legendary boxing movie Rocky, specifically Rocky III. I just need to hear a snatch and I’ll have the melody stuck in my head for the rest of the day.

The New Zealand singer Lorde reminds me of being in New Zealand in 2014, where I wrote part of Elly. I spent three months there with my family as a writer in residence in Wellington – which unfortunately ended abruptly after a break-in. And the burglars were stupid enough then to take my German laptop together with my back-up drive, along with countless personal objects. In the historical cottage we were staying in there was no wifi at that point and I had been even stupider than the burglars and stored my back-up beside the laptop. This break-in seemed like it would be the end of Elly as well as many other projects and data. Luckily, however, I had emailed the manuscript to a friend so I got it back via the internet. This song brings all this back to me. I can well imagine that Lorde, who is synesthetic, felt almost sick with boredom at first when she was writing the lyrics because she saw the sounds as a dreary brown. It was only when she added a pre-chorus that the song appeared green to her, “which was much better.”

Tell the Truth As If It Were Lies by Kathryn Williams

Kathryn Williams is one of my favourite songwriters, and I often had her music on in the background while I was working on Elly. The title of this song works particularly well with the book because of its theme. It describes pretty much exactly what the thirteen-year-old girl Almut experiences in the first part of the book. She happens to be sharing a hospital room with Ines, whose cool detachment she mistakes for self-confidence. Almut falls under Ines’s spell and does everything she can to get the elder girl to accept her. And Ines transforms Almut – into someone unknown to her, called Elly. And these lines could be sung by Almut when she finally manages to tear herself away from Ines: “I did what I could to make myself seen / But you said you liked secrets / Well here is a secret just for you / I’m more now I’m not with you / Everything is an act, every line is a test / Your clothes are just a costume…”

The French band AIR featured on the soundtrack to Sofia Coppola’s film of Jeffrey Eugenides’ book The Virgin Suicides. This song is a kind of synopsis of the plot, spoken by a leaden robot voice. The story of the sisters in suburbia who commit suicide one after the other oscillates between the fathomless banality of everyday life and the way out, which is as gruesome as it is fantastical: suicide. For me, everything culminates in the refrain “Obviously, Doctor, you have never been a thirteen-year-old girl.” This line could also sum up most of my stories – including Elly. They often deal with young girls on the cusp of growing up, who are living as if in a bell jar: their elders, and particularly their parents who have apparently already found their place in life, peer at them with curiosity, but without understanding.

The Power of Good-Bye by Madonna

The Queen of Pop, shortly before her contemplative Kabbalah phase, I think. The song and the video that goes with it are cited in Elly. Elly’s music teacher gets the schoolgirl to rehearse the choreography to the song. None of the teenagers know this ancient song from 1998 and its video. But Elly, who has returned finally after four years, immediately comes out with suspiciously perfect lip-synching. The lyrics and the pathos are also fitting for her: “You were my lesson I had to learn / I was your fortress you had to burn / Pain is a warning that something's wrong / I pray to God that it won't be long / Do ya wanna go higher?”

Mirror in Mirror by Arvo Pärt

I listen to a lot of classical and instrumental music while I write. Precisely because lyrics are so important for me, I can’t produce words myself if someone is singing in the background at the same time. This piece by contemporary composer Arvo Pärt is very apt for Elly because it allows you to experience through music how one reflection creates the next, and how these planes of reflection bounce light back at each other. One refraction after the other and an infinitely duplicated labyrinthine passage – that’s how I picture “Mirror in Mirror” visually.

An underlying feeling links Elly and the first solo album by Damon Albarn (from Blur, Gorillaz): both are about the moments when a chink opens up in life and the soul has a brief opportunity to reset – are my goal and my path still right? In moments like these the body is superfluous, which is why on the cover of Damon Albarn’s first album under his own name he looks like Commander Data without his motherboard. That’s exactly what Everyday Robots sounds like too: a few tricky beats here, a few loops and obscure samples there – but mostly you just hear a thoughtful Damon and his piano. It flows easily into your ear but it’s the opposite of easy listening.

“Night is coming closer ... stories can begin.” Here I can hear the rustling of a Swedish fairy-tale forest in technical chill – I love the artificial orchestral reverb of the Swedish band Hey Elbow. The three band members took the name from an aerobics warm-up exercise they were taught while waiting for a show by The Knife. Very atmospheric, dense – overpowering pop.

Hunger by Florence and the Machine

This song could be dedicated to the girls in Elly as well as the sisters in my story “Geister” (“Shadows” in Long Days): for me, “Hunger” is the ultimate eating-disorder song. Sung by the eternal girl, Florence Welch, who seems to know a thing or two about disappearing through self-destruction: “At seventeen, I started to starve myself / I thought that love was a kind of emptiness / And at least I understood then the hunger I felt / And I didn't have to call it loneliness”

Are You Lonesome Tonight by Elvis

This song is one of the music quotes which were originally hidden in Elly but which were sacrificed during my many revisions of the text. I particularly like the live version where Elvis himself breaks into laughter and can’t get the words out.

This is the ideal electronic writing music for me. No lyrics, driven but not too hectic, a constant beat and not too many instruments which might distract me. Four Tet is a solo project by Londoner Kieran Hebden who otherwise plays with the post-rock band Fridge. Apparently Four Tet is practically unknown in the US. I like all of his tracks and remixes.

Ah – secrets, mysteries, romantic desire, and sentimentality. Don’t we all need that – particularly in the information age? This tender song is by Portishead singer Beth Gibbons who has been touring solo for a few years. It comforts me in my silent room when I type away, all alone, and ask myself: What’s the point?

Missing by Everything But the Girl

This song from the British duo Everything But the Girl is from the same era as Portishead, and still gets played regularly on the radio. Elly is about the “dark side of desire,” as one critic put it. And so here too: unquenched desire. But this time with a driving beat, sparse instrumentation, and keyboard effects.

If Elly were a film, this song would play over the end credits. French singer Camille relies totally on her voice, and rightly so. This almost-acapella song from her album Music Hole is a kind of ironic hymn. Camille first came to attention as a member of the band Nouvelle Vague, which primarily recorded cover versions with a knowing smile, such as the Dead Kennedy’s “Too Drunk to Fuck”.

Maike Wetzel was born in 1974 and works as a writer and screenwriter in Berlin. She studied at the Munich Film School and in the UK. The manuscript of her first novel, Elly, won the Robert Gernhardt Prize and the Martha Saalfeld Prize.

Maike’s short stories have been translated into numerous languages and received multiple awards.