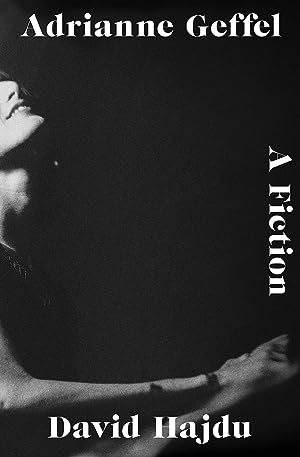 David Hajdu's novel Adrianne Geffel is compelling and inventive, with music always at its core.

In his own words, here is David Hajdu's Book Notes music playlist for his novel Adrianne Geffel:

The title character of Adrianne Geffel is a woman born with an exotic neurological disorder called psychosynesthesia, which leads her to hear music in her mind that corresponds directly to her emotional state at all times. The condition is fictional, like everything in the book except for a few famous or semi-famous people who drift in and out; but I can can relate to Geffel's experience in a way, because I think about music almost, though quite, constantly. The story, while imagined in its particulars, takes place in real places (early on, in Western Pennsylvania, then mostly in New York) in a historical time period (the late Seventies and early Eighties). Music permeates the book, much as it does Adrianne Geffel's consciousness, and I drew freely from the music in my own experience when I was writing.

"Insanity Comes Quietly to the Structured Mind" by Janis Ian
This magnificently titled paean to the tortured loneliness of teenage life, recorded when Janis Ian was fourteen, was released as a single to follow up her hit about the trauma of biracial romance, "Society's Child." It was one of three songs with "Mind" in their titles on her debut album, along with "A Song for All the Seasons of Your Mind" and "Then Tangles of My Mind," though nearly every track on the record is a study of inner life. A later Janis Ian single figures literally in a key scene in my book, when Adrianne Geffel was seventeen.

"Up Above My Head" by Sister Rosetta Tharpe
When Geffel experiences powerful emotions as potent music, her doctors, being doctors, diagnose the condition as disease. Sister Rosetta Tharpe, being a guitar-slinging titan of gospel music, has another point of view, as she sings of finding music in the air -- music everywhere -- as entering a state of enlightenment through emotional release. When I was writing, I thought often of Tharpe and the way she channeled ecstasy through her music.

"Who Do You Belong To?" by Stacy Sullivan
While I was working on Adrianne Geffel, I was also working on music myself, collaborating with the jazz composer and pianist Renee Rosnes. One of the lyrics I wrote tells the story of a girl in a world very much like the one Adrianne Geffel occupied when she was growing up behind the family propane business on the state highway in Western Pennsylvania. In the song, sung in this recording by the sensitive jazz-pop vocalist Stacy Sullivan, the character has a crush on a waitress in a diner on the highway. In the book, the object of Adrianne's ardor has a different job.

"I Put My Headphones On" by Jill Sobule
The mordant, sneekily fun Jill Sobule is one of my favorite songwriters. (We have collaborated a bit, too.) She has a sizable canon of songs that puncture the tropes of pop, all sung with a deceptive smile. This track from her most recent album, Nostalgia Kills, deals explicitly with a motif in Adrianne Geffel: the solace one can find under a set of headphones. The theme of Sobule's biggest hit, "I Kissed a Girl," also figures in the book.

"Mechanical Flattery" by Lydia Lunch
At the time Adrianne Geffel moved to New York, in 1977, the city was broken, bankrupt, open to everyone and everything, and over-rich with music of every kind: punk, disco, salsa, hip-hop, and uncategorizable eruptions of adventurism in the "downtown" scene where Adrianne Geffel is embraced as a phenomenon. No one piece of music could fully capture New York in all its musical colors then. Among the documents of the city in its dark glory, I love this bleak track of No Wave droning by the wonderfully grim Lydia Lunch.

"Enfant" by Fred Hersch
Adrianne Geffel emerges from the art-gallery and loft-party scene in New York to become a recording artist celebrated for making music few people grasp or find much pleasure in. She records in a studio on the third floor of a converted wholesale-electronics operation in Soho, where there was an actual studio in the 1980's, and where the real-life pianist Fred Hersch recorded this interpretation of a form-shifting Ornette Coleman composition with the bassist Charlie Haden and the drummer Joey Baron.

"The Question" by Cecil Taylor
I made a point not to describe Geffel's music in technical detail, so readers could construct it, in all its weirdness, by their personal standards of the weird. I suspect a lot of people will think of music like this by the great exemplar of mercurial virtuosity, Cecil Taylor. I remember seeing Taylor at the Blue Note once, and the music critic at the table next to me lowered his head into the palms of his hands and shook his head as if to say, "No, no, no..." I thought, There's a critic who needs a new job.

"Walking Batteriewoman" by the Carla Bley Band
When I was imagining Geffel's music, I sometimes thought of Carla Bley, who flourished in the time period of the book and is still playing with emotional force. One of the subplots of Adrianne Geffel involves Sony stealing the idea of the Walkman from Geffel. The title of this song could have been a chapter title in the book.

"Up on the Roof" by Laura Nyro
In ways clearly apparent, Adrianne Geffel is a satire of a cultural sphere and an evocation of an odd, lost time in New York history. For me, above all, though, it's a love story, and when Geffel finds her happiness, it's on the roof. I've always loved this vivid snapshot of city life by Gerry Goffin and Carole King, sung by the late New York singer-songwriter Laura Nyro. If there's ever a movie version of Adrianne Geffel, the lead should look like Nyro.

"New Sensations" by Lou Reed
Whatever happened to Adrianne Geffel? I lay out some possibilities at the end of the book, and one involves Laurie Anderson and Lou Reed. This title song from a 1984 album by Reed conjures the no-longer-new sensations of the time and name checks the Delaware Water Gap, the geological halfway point between Geffel's childhood in Pennsylvania and adulthood in New York.

David Hajdu is the author of five acclaimed books of cultural history, biography, and criticism, including Lush Life, and a three-time National Book Critics Circle Award finalist. He is the music critic for the Nation, a professor at the Graduate School of Journalism at Columbia University, and a songwriter and librettist. He lives in New York City.