Diane Zinna's Playlist for Her Novel "The All-Night Sun" 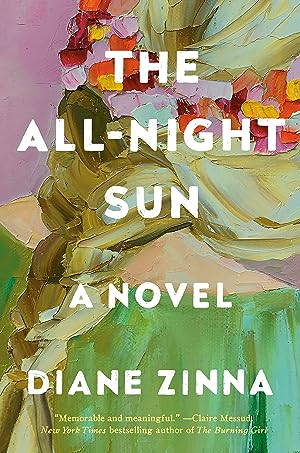 "Inventive and luminous…. Zinna’s intimate debut dazzles with original language, emotional sentience, and Swedish folklore as it plumbs the depths of grief, loss, and friendship [and] reaches an inspired emotional depth that, as the title signifies, never stops blazing."

In her own words, here is Diane Zinna's Book Notes music playlist for her debut novel :

My novel is set mostly in Sweden during the early '00s. I traveled there during the summer of 2001 after a friend promised that at Midsommar everything would be green, fresh, and new, just thawing out—and that sounded like a respite from grief for me. I needed a thawing out. I had lost both of my parents and had just moved to a new city on my own. I was trying so hard to connect with people, but grief had started to feel like a crossing over, with no one in my life seeing the world the way I did anymore. I wanted that trip to Sweden to be a quick fix, and it wasn’t that. But it was my first deep breath after being underwater for a long time.

The All-Night Sun is a mix of my memories from that trip but also all the ways I feared my bubble of shining, unending sun would pop. My playlist includes the songs that followed me around that summer, like “Daddy DJ” and “Clint Eastwood,” but also the songs I’ve come to love and feel inside this story that took thirteen years to tell.

After my mom passed away, I adopted her small dog. It was the heat of summer in Florida, and he wasn’t used to being an outside dog. I went with him to a park and started kicking a ball around. I hadn’t brought water for us. I just kept running, kicking that ball, like I was trying to become something I wasn’t, trying to create a new life for him and me, in that heat, in that dizziness. Every day was a dizzying, breathless push to make myself someone new, someone normal. Siri finds Lauren this way. She reaches out a hand to her, steadies her.

This song is the beat and rush of ocean water, the feeling of being invited to follow, the feeling of being found. It’s the heartbeat in Lauren’s ears after she has said yes to Siri’s invitation home to Sweden, and it’s the thump in her chest as she packs, as she gets herself to the airport, as she follows through with this decision.

This is Lauren and Siri running through green fields after lake swimming. They are walking together on a country road during the blue hour, lying wet in bathing suits in the grass, laughing deep enough to rock the ground and dreamily naming the things around them: “Siri said we’d build our own house, the sky for our ceiling, the giant lilacs our end tables, the rising moon our window, the still-out sun our door.”

This title translates to, “Here comes the night.” It’s is a remake of a song by Pugh Rogerfeldt, and if you can find the video that shows Miss Li singing this to him, watch it. Despite Siri’s promise of an all-night sun, Lauren awakens to find herself the first night in a dark room, hungover and heavy with jetlag. Going to the window, she sees Siri’s brother, Magnus, for the first time, and here comes the night again.

This song by one of Sweden’s biggest artists feels like Magnus to me. The title translates to “Don’t Feel Sorry for Me, Gothenburg” and it is driving, false-noted, wanting to be seen as normal, trying to have a good time. I love that it directly addresses Gothenburg, the coastal city Lauren and Magnus run away to explore together in one ecstatic afternoon.

Blommorna by Miss Li and Petter

No, this place is not your timeless dream. This is really happening now. This is you in all your choices. This is not a painting, this is not a memory yet, but it will be, and when you do remember it, you’ll remember it as your consequences. Even now you’re sitting in the realization of your mistake. When you bow your head you see large, fairytale flowers springing up around you. You can’t stop them, they take over everything, and though you’re crying, people just keep saying how delicate they are, they’re telling you to look, look, how lovely.

Mon Amour by The Plan

Magnus and Lauren are at Gothenburg’s amusement park, Liseberg, and he’s pulling her fast along the cobblestone paths. They are riding the giant wooden coaster, scratching up each other’s backs in the dark statuary, eating long ropes of salt licorice and making out beside the colored fountains—you know, trying to fit all of life into one day. And then it all ends. They stop holding hands on the way back to the tram. They are not talking at the house. Lauren can barely hear him through their shared wall. Merde.

It’s the hardest hue to hold. Lauren is in her summertime happiness with Siri, but she is feeling that the bubble is going to burst soon. She keeps going. There is only forward, no other way. And the song is woven through with Lauren’s darkest question: What if to love and be loved's not enough?

There is something so blue and forced about this song to me. I remember someone telling me that if someone with depression would just put on fast music and dance, they’d instantly feel better. I feel like this is the song a person would try to dance to, and somehow they’d make it to the end, but then they’d collapse face-down on a couch.

Imagine driving through hundreds of miles of green, go-green fields stretching in all directions, jumping streambeds in your white backless sneakers, gathering wildflowers and weaving yourself a flower crown while listening to this song. Imagine lying in your tent alone on the campsite, the rush-rush of the water in the distance, and this song’s bass thumping outside your tent’s walls. Headlights popping on one at a time against your tent wall along with this song’s rhythm. This song is definitely the campsite to me, that girl Sunny sprawled out with her bag of Bilar marshmallow candies on her blanket, all the people lying face down on the grass like they are waiting for their chalk outlines to be drawn. Listen for the birds at the 3:50 mark—they’re Öland’s birds.

This was the other song that followed me around Sweden that summer. It’s a dance song, and it’s Lauren with Siri’s teenage friends, feeling like Alice in the giant house, looking for potions to make her the right size, the right age, to get along.

This song feels like my thank you to Odin’s birds and wolves, to the white horse that stretches its back to accommodate more and more children, to Näcken for playing his fiddle for the young maidens beside the lake. A thank you to the Year Walk story that prescribed a way to see your loved ones again after death, and to the Midsommar pole for pointing downward to another world, even as people dance innocently around it. Nordic Mythology was a gateway into grief for me in ways that were again and again surprising and true. It connected me on a soul level to the place that had changed me.

So Sad So Sexy by Lykke Li

Before I started going around telling people that my book was the “Big, Sad Book of the 2020 Pandemic Summer,” I thought of it as my sad and sexy book. Lauren and Magus are impossibly attracted to each other, but so much of their attraction is because they share so many of the same feelings and pains—pains that their relationships with Siri bring to the surface for them. This is Lauren’s face buried into Magnus’s neck in the kitchen when the walls fall down around them. This is Magnus’s endless gaze as they make love on the Alvar and he brings Lauren home to a place of black, velvet grief.

For years, Lauren’s dreams were with her parents’ drowning, wondering what they experienced in their last minutes of life. Then her dreams are with Siri floating on the Kalmar Sound during the only dark hours of Midsommar’s Eve. She imagines Siri in her yellow inner tube, staring up into the starry night, too weak to swim back to shore, Näcken beneath her like a dad in a pool, pulling her this way and that. This is Lauren trying to reach her, a braided rope of grief, truth, and fantasy looped around her ankle, pulling her further and further down.

Move All Night by SNBRN & Autograf

When I first heard a clip of my recorded audiobook, my heart was in my throat to hear the voice actress’s interpretation of my words. The recording was only 7 minutes, and then Soundcloud moved to this song and the birds singing against the bass beat. Immediately it was the bumper music I wanted for the audiobook. It was too late to request anything like that, but if the beginning of this song can be played immediately after I stop reading in any setting, that would make me happy.

I have been asked a lot about how much of the book is me, and how much is fiction. It’s all fiction and it’s all true. When Lauren speaks of grief, it’s in my voice. I have come to see grief as a crossing over. Once you are on the other side you see the world differently, and it’s through a misty lens of memory that mixes everything together. The All-Night Sun and I are waiting on the other side for you.

Diane Zinna is originally from Long Island, New York. She received her MFA from the University of Florida and went on to teach creative writing for ten years. She formerly worked at AWP, the Association of Writers & Writing Programs, which hosts the largest literary conference in North America each year. In 2014, Diane created their Writer to Writer Mentorship Program, helping to match more than six hundred writers over twelve seasons. Diane lives in Fairfax, Virginia, with her husband and daughter. The All-Night Sun is her first novel.