Largehearted Boy: Ian Stansel's Playlist for His Story Collection "Glossary for the End of Days" 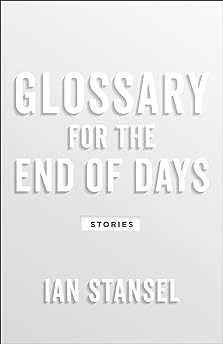 "A collection of stories in search of an America that resists road mapping. In nine stories and two short 'interludes,' Stansel presents protagonists from all over the country in search of their identities (from sexual orientation to musical category), attempting to come to terms with mortality (their own and others), trying to find meaning and order in a world of chance and chaos. . . . [Stansel] is a writer who thinks hard and deep about the country that forges his fiction."

In his own words, here is Ian Stansel's Book Notes music playlist for his story collection Glossary for the End of Days:

The first story in the collection resides in a world where John Lennon survived the shooting outside the Dakota, and where two teens in Seattle are waiting in line, in 1985, to buy the new Beatles album. Since events conspired against such a reality, what we have in the way of post-1970 Beatles songs are the two from the Anthology. It seems that “Free as a Bird” arguably became the more well-known of the two, but I’m fond of this one, as it feels smaller, more intimate, less crowded by '90s production. It isn’t really The Beatles, but if you squint just so…

Yeah, I know—it’s the song from Automatic for the People that a lot of us probably don’t need to hear again. But the second story in the book takes place in a massive traffic jam on a highway, and near the beginning one of the characters mentions the video. You remember, all those people sitting frustrated and silent in their cars, their thoughts transcribed as subtitles—all the pain they can’t express to one another. So partly I feel obliged to list it. But, you know what, I recently watched the video and it’s actually pretty darn moving. And I like that the band just went for it, all in, especially in an era when irony and apathy were de rigueur, when many of the coolest of the cool ironic bands had singers who were too embarrassed to even sing. Right in the middle of this pop-cultural moment REM was like fuck it, here’s a song about how everyone feels pain and sadness and we should acknowledge each other’s troubled humanity, and we’re not going to mask it, in fact we’re just gonna call it “Everybody Hurts,” and we’re going to make a video where all the sad people come together in one big cathartic traffic jam and, like, cry together.

I was listening to Finn’s amazing solo album We All Want the Same Things a lot as I was editing the book. I don’t know that the album influenced the book (it was already written) as much as it helped me to crystallize my understanding of what the book is, or at least what I hope it is: a collection about frailty and loss and grief, but also about hope that there is something on the other side of all that. I become so enamored on the album that for a while I had the lyric “We all get by in different ways…” down as an epigraph. Ultimately I dropped the epigraph, but Finn was kind enough to read the book and blurb it, so I feel good about having that connection to the record.

Liz Phair “Go On Ahead”

This delicate little ditty of a dissolving relationship from Whitechocolatespaceegg evokes tenderness and vulnerability as well as any song I can think of. In my story “How To Be Free” a character fails prey to paranoid, conspiracy-theory thinking and goes to Tampa to try to find the answers to her tragic past. Left behind (and barely making any appearances in scene) is her husband, and I tend to think of this song as his, as he has no choice but to watch his love go off, away from him, to do what she needs to do. Phair sings, “You say you’re a ghost in our house and I realize / I do think I see through you,” and we feel that combination of love and resignation.

My first collection of stories was already drafted and sold by the time my wife and I welcomed our first daughter into the world. Since then another baby girl joined our family. Unsurprisingly, a lot more parent-child relationships occupy the pages of this new book than the first. I’ve rarely heard another song that so honestly captures the complexity of parenthood. It is bursting at the seams with trembling parental love (tears still well in my eyes at the simple lyrics, “The face on you, the smell of you…”), but also acknowledges that one does not suddenly transform into a new person with the arrival of a baby. You’re still an actual human being. Or as O’Connor puts it, “no longer mad like a horse / I’m still wild but not lost / from the thing that I’ve chosen to be.” That “still wild” bit always felt like an act of self-generosity to me, the allowance of complex humanity to oneself even after becoming a parent. I hope the parents (and kids) in the book approach the level of compassionate complexity that O’Connor achieves in this song.

Only a few minutes after I got an email from The Bennington Review accepting my story “We’ve Got Tonight” into the journal, I saw a post from a music blog announcing that after all these years, the music of Bob Seger would finally be available for streaming. I chose to take it as a sign that the universe approved of my nicking the title.

Another case of title theft here. I was working on an idea for a story about a hipster indie band that has a breakout crossover Country hit, but it didn’t start coming together until I decided to steal/manipulate the titles of both Charles’s Modern Sounds in Country and Western Music and Simpson’s Metamodern Sounds in Country Music. I didn’t think much about it beyond that fact that I liked the name a lot (I ended up with “Modern Sounds in Country and Western”), but now I see that the idea of genre crossover runs through all three. On “Midnight” Charles takes a Chet Atkins tune and remakes it a jazzy, boozy, up-too-late heartbreak singalong. And on “The Promise” Simpson takes a loveably schmaltzy post-punk ballad and transforms it into an equally schmaltzy—and equally loveable—Country ballad.

Because it’s the song playing between the lines of the title story, and because it’s America 2020 and we all could use a reminder that it ain’t no sin to be glad you’re alive.

Ian Stansel is the author of the novel The Last Cowboys of San Geronimo and the short story collection Everybody’s Irish, a finalist for the PEN/Robert W. Bingham Prize for Debut Fiction. His fiction and nonfiction have appeared in numerous venues such as Ploughshares, Poets & Writers, Salon, Joyland, Cincinnati Review, and elsewhere. He teaches creative writing at the University of Louisville.