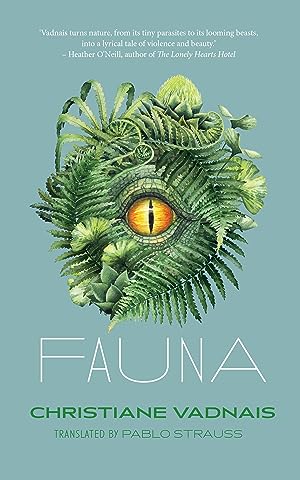 "Vadnais’s exciting debut immerses the reader into the dreamy and menacing near-future world of Shivering Heights, a flooded wilderness in the twilight of the human race. ... The sumptuous imagery and limpid atmosphere forms a dizzying picture of a world after human existence. This dark, sensual novel invites the reader to imagine nature thriving in the toxic aftermath of human domination, and makes for an essential addition to the recent crop of eco-fiction."

In her own words, here is Christiane Vadnais's Book Notes music playlist for her debut novel Fauna:

In Fauna, we follow a biologist, Laura, through a world thrown off-kilter by environmental crisis. The feel is gothic, between fairy tales and anthropocene imaginary. As Laura pursues scientific experiments to understand a mysterious parasite, our point of view shifts, lingering on humans and animals and the landscape itself. Nothing is immune from the violent transformations or the unnerving power of nature.

Writing Fauna was a cinematic experience. I could see the action unfolding as I wrote. That’s likely why this playlist skews toward instrumental pieces. The book is not just Laura’s story: it encompasses an entire world, alive and writhing in its organic splendor and climactic shifts, a pendulum swinging between birth and devouring that will come to rest in a new balance between humanity and nature.

Fauna is a set of ten linked fictions. I’ve chosen a song for each that I feel represents its spirit.

DILUVIUM / Riders on the storm, The Doors

Like the song, Fauna opens with a storm. It is haunted by water and a character with obscure intentions. In the Doors song, a killer is driving through the rain. We feel a dark, ironic joy in in the chord changes and the rhythm – an ambiance that, like certain passages of “Diluvium,” sets the tone for a pre-apocalyptic story to come.

CREATURAE / I got the juice, Janelle Monáe feat. Pharell Williams

Okay, maybe I just love Janelle Monáe too much to leave her off my playlist. I can’t get enough of her energy, her eclecticism. But the funk stylings on this track are also a perfect fit for the unfettered, unconventional love scene that awaits Laura when she visits a village built from flotsam and jetsam in the middle of a lake. Here she meets Thomas, a man adapting to his lacustrine environment in surprising ways.

This tone poem was composed for Godfrey Reggio’s 1982 experimental film, Koyaanisqatsi: Life Out of Balance, which depicts the astounding variety and amplitude of our physical world. I feel affinities with the film’s formal approach, and its ambition to recast the spatio-temporal perspective and see the inhabited world in one large sweep. The shivering pulse of the organ and choir would not be out of place in a lion’s den, which as it happens is where the story finds Laura, working as a zookeeper when she is visited by a strange couple who have set out on an ill-advised mission.

This piece’s wavelike movement and tidal rhythms convey nostalgia for the submarine world that has engulfed Thomas, Laura’s erstwhile lover, in her absence. I see swaying seaweed, currents, the shimmer of sunlight on water. (The group’s name, “Flore laurentienne,” is taken from a seminal work of botany by Marie Victorin, who surveyed the flora of the St. Lawrence River Valley.)

My boyfriend took me to a Sun O))) show in Montreal, and it was a revelation. I could feel the music thrumming in my body. “Eternal Return” is one of their lighter numbers, but it conjures up for me the unhurried balance of earthly time, upset and rendered frantic by human activity. In “In Vivo,” Laura gives birth in her laboratory during an epic snowstorm. This highly personal event connects her with the origins of human evolution, the primitive danger of living, and the impossibility of controlling fate.

Fauna is set largely in a small town called Shivering Heights that I imagine lies somewhere along the Canada–US border. Among the residents we meet is Cathy, a teenager beset by nocturnal hallucinations since her mother slaughtered her pet rabbits. Like Jefferson Airplane, who brought us the immortal “White Rabbit,” I’m fascinated with surrealism. Is Alice in Wonderland to blame? Absolutely.

Fauna has one character who appears in different guises in many stories. When the waters rise, Heather’s screams haunt the forests of Shivering Heights. But I can also hear her speaking in a breathy whisper, just like Tori Amos in this dead woman’s monologue.

While working on Fauna, translator Pablo Strauss listened to Loscil every day. This is ominous music, steeped in rain, like the stories in Fauna where the mist and fog feel like characters in their own right. This could also be the perfect track for Laura to listen to as she runs through the arctic cold, under the Northern Lights, toward a terrifying encounter she was warned to expect.

Every one of my writing projects is inhabited by a controlling emotion, a feeling that grips me in my stomach and ushers me on to the end. Fauna is a book of anxiety. I wrote “Requies” in one shot, inhabited by images of devouring and transforming landscapes that find an uncanny reflection in the sonic breadth of GY!BE.

This song’s mix of enchantment and fear evokes the new equilibrium sketched out in Fauna’s final story: a world marvelously hostile, surreal, and completely unknown. I’ll leave you with a passage:

All around her a new world unfolds, teeming with furies and violence and beauty. True, the humans of this new time cleave to tarnished images of the olden days, now grown so faint their memories scarcely retain the trace. These days the great newness of it all has so enraptured and terrified them that more often than not they fall into a dreamless sleep…. All around, in the earth, on the undersides of leaves and in the hollowed-out trunks of trees, the wait is now over for all that lay dormant.

Christiane Vadnais holds an MFA in creative writing, and has long been active as an events programmer and project manager in Quebec's literary community. Radio-Canada named her a 'Young Author to Watch' for 2020. Fauna is her first work of fiction. She lives in Quebec City.