Largehearted Boy: David Menconi's Playlist for His Book "Step It Up and Go"

David Menconi's Playlist for His Book "Step It Up and Go" 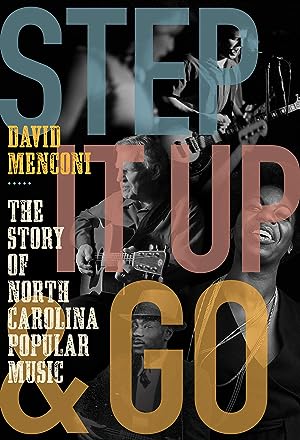 David Menconi's Step It Up and Go is an engaging and enlightening history of the past 100 years of North Carolina music.

"Over and over again, this story of North Carolina music is a righteous invitation."

In his words, here is David Menconi's Book Notes music playlist for his book Step It Up and Go:

Over the past century, North Carolina artists have made enormous contributions to American music, playing key roles in the evolution of bluegrass, soul, beach music, alternative rock, hip-hop and more. And while that’s a wide range, it’s a story with more connections than might seem immediately apparent, grounded in the state’s populist working-class traditions. Not for nothing is the state motto Esse Quam Videri – “To be rather than to seem.”

Step It Up and Go: The Story of North Carolina Popular Music, from Blind Boy Fuller and Doc Watson to Nina Simone and Superchunk tells that history as one long narrative, covering about a century of musical phases, stages and changes. Here’s the “Step It Up and Go” mix to accompany the book

Step It Up and Go begins with the 1920s string-bands that came out of the textile-mill towns that dotted the North Carolina Piedmont. One of the best was Charlie Poole and the North Carolina Ramblers, who played an embryonic form of bluegrass decades before Bill Monroe got to it. Poole lived a life worthy of his backup band’s name, rambling far and wide before drinking himself to death in 1931 at age 39. Almost eight decades later, Poole’s unlikely kindred spirit Loudon Wainwright III won a Grammy Award with this tribute to a life well-rambled.

Blind Boy Fuller, “Step It Up and Go”

The book’s title track, so to speak, is a late-period hit by the great Depression-era Durham bluesman Blind Boy Fuller (Fulton Allen), who died in 1941. Fuller, Rev. Gary Davis, Sonny Terry, Brownie McGhee and other blues players essentially made their livings by busking around Durham’s tobacco warehouses in the 1930s. The oft-covered “Step It Up and Go” is the “Johnny B. Goode” of Piedmont blues, a song everyone knows. It’s still heard wherever the style is played.

A music-business visionary, Arthur Smith pioneered syndicated country-music television with his down-home variety show “Carolina Calling,” which broadcast out of Charlotte for more than 30 years beginning in from 1951. Even before that, however, Smith earned his bonafides with this hillbilly-boogie instrumental, recorded in 1945 while he was still in the Navy Band in Washington, D.C. Wildly popular, it’s long been one of the bedrocks of both country and rock music.

Tar Heel titans both, Doc Watson and Earl Scruggs were two of the most heralded virtuosos that North Carolina ever produced. Scruggs helped Bill Monroe invent bluegrass in 1945 with an incendiary style dubbed “Scruggs-style” banjo, while Watson’s astonishing flat-picked guitar made him one of the heroes of the 1960s folk revival. On their 2003 live album The Three Pickers, they went back to the aforementioned Charlie Poole with this cover of his first and biggest hit, 1925’s “Don’t Let Your Deal Go Down Blues.” Both were pushing 80 at the time, but neither had lost a step.

From Winston-Salem, the “5” Royales were instrumental in the 1950s evolution of gospel into rhythm & blues and eventually soul music. Everybody from James Brown to Stax Records hitmakers Booker T. & the M.G.’s picked up on them, and 1957’s “Dedicated to the One I Love” was their masterwork – even if it would be a much bigger hit for The Shirelles and The Mamas & The Papas than the Royales themselves. That was typical of their luck. By the time the Royales were finally, belatedly inducted into the Rock and Roll Hall of Fame in 2015, they were all long gone.

In its initial incarnation, beach music arose from white kids dirty-dancing to the forbidden fruit of bawdy r&b in the years after World War II, when the Jim Crow era of segregation was still in effect across the South. That didn’t stop vacationing white teenagers at North Carolina’s beach towns from sneaking across the tracks to listen to jukebox r&b records by the likes of the “5” Royales – or this genre landmark, featuring Durham native Clyde McPhatter, who later fronted The Drifters.

In early 1969, a group of white kids formed a beach band called Stax of Gold in the military-base town of Jacksonville, North Carolina. Then Woodstock happened and they went in more of a hard-rock direction, changing their name to Nantucket. But they never entirely stopped being a beach band, either, including on this, their 1978 debut single for Epic Records.

Let’s Active, “Every Word Means No”

In the early 1980s, the world – or at least the subset of that time’s arty American rock underground – was beating a path to Mitch Easter’s Drive-In, a studio he ran out of his parents’ garage in Winston-Salem. Chief among those bands was R.E.M. from down the road in Athens, Ga. Easter co-produced R.E.M.’s first three records, and he also led a band of his own called Let’s Active. From 1983, “Every Word Means No” was Let’s Active’s signature, a masterpiece of twangy guitar tones and menacing atmosphere.

In the 1990s, Chapel Hill was among the American music-scene towns scenes touted as a potential “Next Seattle” indie-rock boomtown. And while it had plenty of local bands who seemed like possible successors to Nirvana, the two Chapel Hill bands that actually went platinum were the last two anyone would have predicted. A group of punks playing hot-jazz, Squirrel Nut Zippers hit it big with “Hell,” a calypso earworm about the afterlife. Despite the name, Ben Folds Five was a piano-pop trio and their hit was “Brick,” a somber and downcast song about a teenage abortion. None of it made any sense, which means it all made perfect sense for Chapel Hill.

Superchunk, “What a Time to Be Alive”

One of Chapel Hill’s 1990s-vintage “bands most likely to” was Superchunk, but they actually had their big commercial success running a record company. That was Merge Records, which won the prestigious album-of-the-year Grammy Award in 2011 with Montreal rock band Arcade Fire. But Merge co-owners Mac McCaughan and Laura Ballance kept Superchunk going, too. And after a career of letting extracurricular activism speak for their political beliefs, in 2018 Superchunk took the plunge into full-on agit-punk with this straight-from-the-headlines song, title track to their album.

Although North Carolina Americana has never had a big commercial breakthrough, it’s never gone away, either. The style’s best of the 21st century is centered on Mike “M.C.” Taylor’s Durham group Hiss Golden Messenger, which is part of an informal extended collective including everyone from old-time folk legend Alice Gerrard to electronic duo Sylvan Esso. “Heart Like a Levee” is title track to a 2016 Hiss Golden Messenger album that began as a Duke University commission, as songs to accompany a set of William Gedney’s 1972 photos from a Kentucky mining camp.

Avett Brothers, “Murder in the City”

Concord’s Avett Brothers earned their following the old-fashioned way, onstage and one fan at a time. Sometimes that was close to literal, as a lot of their early-days shows were for “crowds” of not much more than a single person. But they kept the faith and eventually broke out to wider audiences. Family has always been one of the Avetts’ great subjects, never moreso than on this 2008 imagined conversation between a father and a son.

The singer the world came to know as Nina Simone was born Eunice Waymon in 1933 in the town of Tryon. She grew up dealing with the ugliness of segregation, which derailed her original plan of becoming a classical pianist after she left North Carolina for The Juilliard School as a teenager. So she became a singer, one capable of channeling immense rage. That especially goes for this 1964 anthem, which was inspired by two of the most heinous crimes of the civil-rights era – the murder of activist Medgar Evers, shot dead in his driveway; and the 16th Street Baptist Church bombing that killed four young girls in Birmingham, Alabama.

One of the great hopes of 21st century North Carolina hip-hop is the Marlana "Rapsody" Evans, a native of the tiny Down East town of Snow Hill. She came to Raleigh for college at NC State University, becoming part of super-producer Patrick “9th Wonder” Douthit’s orbit. This song from Rapsody's 2019 album Eve pays tribute to her North Carolina forerunners, not just Nina Simone but Asheville native Roberta Flack: “I am Nina and Roberta/The one you love/But you ain’t heard of.”

No state owned the original Fox Network version of the singing competition show American Idol like North Carolina, which produced three winners (as well as influential also-rans including Chris Daughtry and Clay Aiken) in 15 seasons. High Point native Fantasia Barrino was the state’s first Idol winner in 2004, a year after Aiken finished as runner-up. Her sultry cover of the Gershwin classic “Summertime,” which appeared on her 2004 debut album Free Yourself, was a major reason why she won.

Music critic and journalist David Menconi spent twenty-eight years as staff writer at the Raleigh News and Observer. His most recent book (with Ray Benson) is Comin' Right at Ya: How a Jewish Yankee Hippie Went Country, or the Often Outrageous History of Asleep at the Wheel.