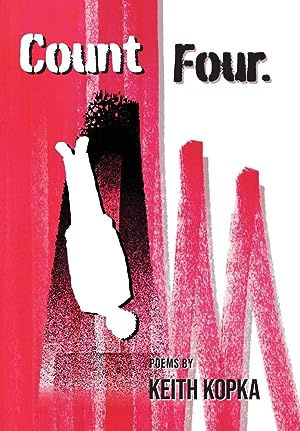 Erin Belieu wrote of the book:

"Count Four, moves with extraordinary precision, a hard won and bloodied humor, and a penetrating quality of mind that never insults the reader with cheap epiphanies."

I’ve been in a band in some way, shape, or form since I was 14 years old. So, it’s no surprise that Count Four is a book inexorably linked to music. The collection’s title is even meant to invoke the act of a musician counting in the beginning of a song (a la Dee Dee Ramone), and many of the poems in the collection were written about the years I spent in and around the East Coast punk scene.

As much as my poems are impacted by music, I don’t write listening to music. If I did, I wouldn’t be able to focus. I’m such a music nerd that if a song is playing while I’m writing, I can’t help but be sucked completely into the song, or, even worse, I start going through the genealogy of the artist and every one of their associated acts. With that in mind, the opportunity to create this playlist is both cathartic and intimidating. I’m excited to set some of these poems and narrative themes to music, but I really wanted to make a playlist that slays!

1. Idles - Colossus
Count Four opens with a poem called “Interrogation,” which envisions a young male speaker taking on the burdens of his masculine role models. This poem serves as a kind of “Ars Poetica” in that this book attempts to reconcile the more toxic aspects of masculine identity and confront the forces shaping that identity. I think that “Colossus” is speaking to similar themes. By the time the song breaks, and the singer begins screaming, “I don’t want to be your man,” the redefinition of identity that follows by lyrically undermining masculine archetypes by placing them in new contexts creates a catharsis that many of the poems in Count Four are also working towards.

2. Nirvana - Downer
This is where it all began. Before I even knew what punk was, before Green Day, before the Punk-o-Rama compilations, this is how I was indoctrinated. I was trading tapes, tracking down bootleg copies of the “Outcesticide” compilations, and even buying vinyl without a record player. I think it’s safe to say that my Nirvana obsession is a common story among people my age. They had it all: the attitude, the reluctant “voice of a generation,” and not to mention the tunes. Nirvana is also where I learned about the “27 club,” the rock and roll lifestyle, and the idea that it’s better to “burn out than to fade away,” a mantra I’ve clung to as a crutch so many times over the years that I stopped understanding its true implications. It wasn’t until I began writing this book that I started to come to terms with the true selfishness behind the statement.

3. Butthole Surfers - Moving to Florida
Most of the poems in this collection were written in Florida. Around 2010, I was pretty burned out and spent the summer trying to get my life together by living in an artist colony next to a psychic village in upstate New York. Shockingly, this plan worked! I met my future best friend and mentor Erin Belieu who encouraged me to apply to the Ph.D. program at Florida State University. Fast forward, I end up living in Florida for eight years and changing my life. I even ended up working at FSU. I’ll admit, most people don’t move to Florida to get their lives back on track, but it worked for me. This song perfectly embodies the insanity that is Florida, and it also strangely speaks to the promise it provided me.

5. Paul Simon - Duncan
First of all, I think that Paul Simon is a genius, and I put a song by him on just about every playlist I make, so why should this be any different? Secondly, this song is beautiful, and I return to it again and again because something in the detail of the character’s journey reminds me of the coming of age narrative that is woven throughout Count Four.

6. Sorority Noise - No Halo
There are ghosts all over this collection. The book is filled with elegiac moments addressed to people whom I’ve loved and have passed on. To this end, I thought about including a song like Jim Carroll’s classic “People Who Died” on my list, but I don’t think his irreverent take does enough to speak to the survivor’s guilt that I went through, especially in my late twenties when I was losing multiple people a year. “Why not me?” is a question I asked myself a lot back then, and the poems in Count Four are, in some ways, an answer.

7. Austerity Program - Song 25
The middle section of Count Four is a long poem in eight sections entitled “Tour,” which explores many of the experiences I’ve had playing live music over the years. The poem also pushes against the stereotype of the touring musician put forward in songs like “Beth.” It’s hard to find just one poem to embody such a big element of the book, but I think “Song 25” comes close. The monotony, the unfulfilled desire, the failure, the intensity, the violence, and even my tinnitus, it’s all in there.

8. None more Black - We Dance on the Ruins of The Stupid Stage
Ok, before I get carried away, I want to point out that playing in bands isn’t all bad. Playing music is fun, and, even when you are struggling, the intense comradery and connection that you feel with your bandmates and the audience is without comparison. You feel like you’re going to war together, and at some points it even feels like you might be winning. I think this song really hits on the joy and community associated with those moments.

9. Johnathan Richman - New England
This song is just so catchy. I’m originally from Rhode Island, and, although I’ve lived quite a few places up and down the East Coast, I am a New Englander through and through. From the working-class urban landscapes to the splashes of organized crime, New England is definitely its own character in Count Four.

10. Fatesealer- Designs
Is it wrong to put your own band on the lists? If so, I’m not sure I want to be right! The other members of Fatesealer, Steve and Charlie, are all over this book. Steve is especially present because he and I have played in multiple bands together and been down in the trenches. I think he’s one of the people that has pushed me the most creatively in my life, and this song has always been one of my favorites that he wrote. I love the way that it addresses the idea of being the hero in one’s own story, which is something that I find myself confronting in my poetry time and time again. Also, it’s impossible to hate that “I Wanna Be Your Dog” piano homage he snuck in there.

11. Warren Zevon - Lawyers Guns and Money
My poems often live in the liminal spaces on society’s fringe that punk music and D.I.Y. culture inhabit. Sometimes these spaces are wonderful and creative, but they are just as often dangerous and tragic. Writing this collection was an attempt to make sense of how the things and people that I loved the most in this environment were also what was most likely to destroy me. It was also an attempt to reconcile the fact that the reason I loved and desired them was not in spite of that fact but because of it. Zevon really puts some pop sensibility to these kinds of realizations.

12. Weak Teeth - Repetition Implies Importance, Implies Importance
This song is a burner by some of my oldest musical collaborators. I formed my first band with the drummer of Weak Teeth all the way back in eighth grade, and I formed my second band with the drummer, bassist, and rhythm guitarist of Weak Teeth. All of them are incredibly talented and have gone on to play all different varieties of music. My experiences with them are in many of the poems in this book. Also, you can hear me screaming on those posi-core gang vocals. BLACK EYES! BLACK EYES!

13. They Might Be Giants - Dead
There are a lot of situations where the speaker in Count Four is put in danger either by other people or by his own hand. Writing these poems forced me to look back on my upbringing in an attempt to understand where this clichéd death wish of mine came from. These same ideas and fears resonate in this song. Is there a more powerful line than “Now it's over I'm dead and I haven't done anything that I want, or I'm still alive and there's nothing I want to do?”

Keith Kopka is the recipient of the 2019 Tampa Review Prize for his debut collection of poems, Count Four (University of Tampa Press, 2020). His poetry and criticism have recently appeared in Best New Poets, Mid-American Review, New Ohio Review, Berfrois, Ninth Letter, the International Journal of the Book, and many others. He is also the author of the critical text, Asking a Shadow to Dance: An Introduction to the Practice of Poetry (GRL 2018) and the recipient of the 2017 International Award for Excellence from the Books, Publishing & Libraries Research Network. Kopka is the Director of Operations for Writers Resist and a Senior Editor at Narrative Magazine. Born and Raised in Providence, Rhode Island, Keith spent many years playing in and touring with punk and hardcore bands all over the country. He’s currently an Assistant Professor at Holy Family University in Philadelphia.