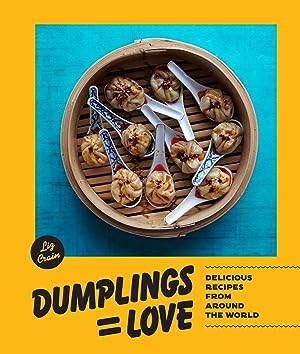 Liz Crain is one of my favorite food writers, and her first solo cookbook Dumplings Equal Love is informative, fun, and filled with easy to follow and delicious dumpling recipes from around the world.

Food & Wine wrote of the book:

"Do dumplings equal love? Well, ask anyone you give a plateful of the pork-and-homemade-kimchee mandu or gingery pork-and-cabbage gyoza from this cookbook, and you’ll probably get the answer, 'Are you kidding? Of course!' Food writer (and dumpling fanatic) Liz Crain guides readers through the key steps of making great dumplings—what tools and ingredients they’ll need, how to form different shapes, the nature of different dumpling doughs—before diving into a plethora of recipes (for both dumpling and dipping sauces) derived from cultures around the world. Classics like pork & shrimp shumai are present; so are pillowy Italian-inspired goat cheese dumplings in arrabbiata sauce, and shrimp & grits dumplings spiced up with homemade sambal."

I always really love putting these Largehearted Boy playlists together. I've done them for a bunch of my books, over the years, including Toro Bravo: Stories. Recipes. No Bull. (McSweeney's 2017), Grow Your Own: Understanding, Cultivating and Enjoying Cannabis (Tin House, 2017) and Food Lover's Guide to Portland (Hawthorne Books, 2014). I'm such a fan of this music + books installment from groovy folks.

As an author, it's a really sweet way to commemorate a book and make a musical companion piece for it -- in this case my cookbook Dumplings Equal Love. My boyfriend is a DJ -- DJ Jimbo -- and he keeps me on a steady diet of delicious and eclectic tunes. I keep him on a tasty diet -- of DUMPLINGS! Dumplings are one of my all-time favorite foods so researching, developing and writing this cookbook filled with all sorts of steamed, boiled and fried dumplings from around the world -- my first solo cookbook -- was a dream come true.

I hope you like these songs and how they make you feel. It's really important to feed ourselves plenty of transformative and healing music and art, as well as creative and comforting foods, right now. Be good to yourself. Shake a leg. Eat some dumplings. I'm sending you love, love, love.

Everything I Do Gonna Be Funky (From Now On) -- Lee Dorsey, The New Lee Dorsey

I was pretty scared to set into researching, recipe developing and writing Dumplings Equal Love -- my first solo cookbook. Excited but scared. I'd co-authored two cookbooks prior and written a couple other books but never a solo cookbook filled entirely with my recipes and my stories. Early on, once I got into the groove, I realized that this song is key. For me, it's all about that careful balance of working intensely with all my might (I have a very strong Midwestern work ethic) as well as enjoying myself and being a bit wild at times while doing so. I wanted the project to be as fun and filled with heart as the title is. Every step of the way. Sure, there were bumps in the road. There always are when writing a book. But for the most part, I danced to this tune. I still do.

I did all of the recipe testing for Dumplings Equal Love in my home kitchen so that means that I had all of my records and music on hand to keep me company while developing everything from Chinese Soup Dumplings aka Xiao Long Bao, Korean Pork & Kimchi Mandu, Norwegian Komper and Sour Pickle Pierogi to Morel Sherry Cream dumplings. A lot of the time, I listened to Portland local jazz station KMHD while I was dusted in flour, rolling out dumpling doughs, slicing and dicing fillings and cooking up delicious dumplings. Yes, friends and family got a lot of dumpling love throughout the entire endeavor.

KMHD is one of my favorite Portland stations and the DJs are all so positive, full of personality and insightful. I'd get up in the morning, put on Derek Smith's The Morning Session -- you can livestream it here -- and start rolling out my dumpling doughs and preparing my fillings, dipping sauces and sub-recipes for the day.

When I was really hitting my stride with colorful, flavorful art skins -- dumpling skins made with powdered veggies, fruits, spices and more with polka dots, stripes and other designs -- toward the end of the biggest push of recipe testing for the book, this song came on on KMHD. It rang so true. I felt heard. I turned it up and danced in the kitchen. "Whatever you do. Do it good."

I had no idea that art skins would turn out to be such a big burst of energetic creativity for me toward the end of the project. Now I almost always add some sort of color or crunch to my dumpling skins with everything from powdered stinging nettles (green and woodsy), powdered dragon fruit (pink and tropical) and smoked paprika (orange and smoky) to black and white sesame seeds. And I LOVE making marbled skins by twisting different colored dumpling skins together before rolling them out.

"You and me. Let's be free." The Dumplings Equal Love five-day photo shoot was at my house with photographer Dina Avila, food stylist Nathan Carrabba and kitchen floor cleaner Rubin the White Wolf. That's my dog. Since we shot everything in my kitchen and living room, I got to be DJ. I usually quickly picked out a few records the night before and there was always a Sonny record or two in the day's stack. I've been a fan of Sonny's music for the better part of a decade now and every time he or his band come to Portland, I go see them.

The book's photo shoot was intense -- I cooked and we shot almost every recipe in the book during those five days. One of the funniest memories is of Nathan crouched over the just pan-fried Bananas Foster dumplings, blowing through a straw to lightly melt the vanilla ice cream over the top of them. We wanted the melting ice cream to trail down through the pleats of the chocolate skinned dumplings. We ate a lot of dumplings that week :)

Grazin in the Grass -- The Original Pinettes Brass Band, Finally

While I was recipe testing, I took a week-long vacation with my sweetie Jimbo to New Orleans. Neither of us had been before and it was such an adventure. We got to see this all-women brass band -- The Pinettes -- AND the Soul Queen of New Orleans, Irma Thomas, during the French Quarter Fest. And many other great New Orleans bands and musicians. We also got to attend some intimate and really informative jazz seminars, one all about Professor Longhair aka Fess, on the second floor of the New Orleans Jazz Museum. Those were all free and open to the public. The entire festival was! So awesome. There are a lot of Cajun-inspired recipes in my cookbook including the Bananas Foster dumplings with chocolate skins. Yum, yum, YUM!

Grazing in the Grass -- Hugh Masakela, The Promise of a Future

This is the original recorded version -- a beautiful instrumental tune composed by Philemon Hou played by South African trumpeter Hugh Masakela. It was released in the US as a single in 1968.

Not too long after that New Orleans trip, I headed out to the southwest Washington coast for an artist residency at the Sou'wester to work on the cookbook. I've done several residencies at the Sou'wester over the years. It's such a magical place. I get so much done there and always move through a rainbow of bright new perspectives. Every day.

On my drive out last summer, I found out that New Orleans food legend Leah Chase had died (on June 1st) and while there Nola music legend Dr. John died (on June 6th). Both were incredible humans and Nola legends. Rest in peace. I made shrimp and grits while at the Sou'wester in Leah's honor and there are Shrimp & Grits DUMPLINGS in the book. Made with from-scratch sambal! I listened to Dr. John as I finished up edits.

Sir Duke -- Stevie Wonder, Songs in the Key of Life

For years, my friend Michelle, her now 13-year-old daughter, Kylie, and I have had a tradition that we call Classic Comedy Sleepover at my place. What is not included in the name is the homemade pizza that we almost always make or the dumplings that we now often make as well. We always do a lot of dancing in the kitchen and living room on Classic Comedy Sleepover nights. Stevie Wonder records are usually a part of our repertoire. Cooking dumplings with kids is soooo much fun. I have an essay on it in the book. I highly recommend letting kids do their thing with their dumplings. Don't micromanage them.

I love this song. Songs that get stuck in my head are often connected to whatever I'm doing or about to do. When I wake up, I might start humming Lovely Day by Bill Withers or Bob Marley's Get Up Stand Up. When the sun comes out, I'll hear Roy Ayers' Everybody Loves the Sunshine or Here Comes the Sun by The Beatles. When I set into cooking, especially cooking dumplings, this one often pops in my head.

Time Doesn't Exist Love is all There Is -- Larry Yes, Love Vibes for all the Creatures of the Universe

My friend Mandy Morgan produced this Larry Yes record on her Nadine Records label. Larry is a Portland art and music legend. I sang along to this song many times while cooking and testing dumplings for the book. I bought the album at the end of my second Sou'wester art residency from the lodge shop. It's such a spirit-lifting one. I commissioned Larry to make this Dumplings = Love art piece for my kitchen. It's amazing and very happy in its new home.

2020 has been a beast. Global pandemic, police brutality, governmental breakdown, raging wildfires. No matter what you do or how the heck you slice it 2020 has been rough. This song always brightens me, lightens me and makes me feel better. I think it's a great tune to end this playlist on. I hope that the music that Dave aka Largehearted Boy allowed me to put together for you here makes you feel good when you listen to it. I hope it lets some light in. If you couple it with Dumplings Equal Love, and some dumplings and dipping sauces from the book, I think you'll feel better. I can only hope. Much love to you and to yours.

Liz Crain often writes on Pacific Northwest food and drink, and is the coauthor of Toro Bravo: Stories. Recipes. No Bull (McSweeney's, 2013), author of Food Lover's Guide to Portland (Hawthorne Books, 2014), coauthor of Hello! My Name is Tasty: Global Diner Favorites from Portland's Tasty Restaurants with John Gorham (Sasquatch Books, 2017) and coauthor of Grow Your Own: Understanding, Cultivating, and Enjoying Cannabis with Nichole Graf, Micah Sherman, and David Stein (Tin House Books, 2017). She is the editor of True Portland: The Unofficial Guide for Creative People (Hawthorne Books, 2017). Her writing has appeared in publications such as Food & Wine, The Sun, the Guardian, Cooking Light, and The Progressive. Crain is also co-organizer of the annual Portland Fermentation Festival.