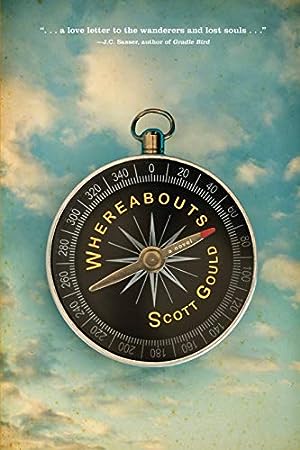 Scott Gould's novel Whereabouts is an impressive debut, a compelling coming of age story set in the American South of the 1970s.

In his own words, here is Scott Gould's Book Notes music playlist for his novel Whereabouts:

In my new novel, Whereabouts, eighteen-year-old Missy Belue longs to escape her small, stifling Southern town, so she hits the road without knowing exactly where she’s headed. The thing she knows for sure: when you finally make your move, there are really only two directions you can go—away from or toward. At one point in the back half of the novel, she borrows (okay, steals) a bone-white Cadillac, puts the top down and makes a late-night escape. She finds a radio station—probably AM—and the deejay promises an hour of nonstop music. This playlist contains the songs I imagine Missy should hear during that hour, songs of the road, songs about lonesome traveling, songs about finally fleeing something dark or heading in the direction of something safe and warm. You always got two choices—away from or toward.

Whereabouts is set in the 1970s, so naturally I thought about some traveling songs from that decade. You could put all of Running on Empty on this wanderlust playlist, but this is the one I’ve always loved, probably because David Lindley’s fiddle adds some tears to the track…and because the first half was “recorded in room 301 of the Cross Keys Inn, Columbia, Maryland.”

Lucinda Williams has a voice custom-made for road songs—high and lonesome, scratched up from what sounds like too much bourbon and too many cigarettes, too many miles and too many broken hearts. The lyric sheet for this one is filled with sadness, but these lines are daggers: “Child in the backseat ‘bout four or five years/Lookin’ out the window/Little bit of dirt mixed with tears…” Definitely an “away from” song.

An early '70s song from one of my favorite bands. A truck driving anthem. Missy Belue never steals an eighteen-wheeler in the novel, but I can imagine her singing along to this track as she flies down the road during her hour of nonstop traveling songs. (Especially the part that’s perhaps the best example of song lyric alliteration in history: “I’ve been from Tucson to Tucumcari/Tehachapi to Tonapah…”)

Springsteen’s catalogue could fill a half dozen playlists with road songs (“Born to Run,” “Thunder Road,” “Racing in the Street,” “State Trooper,” etc., etc.) but one song from his 2019 release Western Stars seems especially written for Missy Belue’s soundtrack. When I first heard the poetry of “Moonlight Motel,” I thought Springsteen was describing the crumbling Thoroughbred Motor Inn, where Missy finds some respite from the road. “Now the pool’s filled with empty, eight-foot deep/Got dandelions growin’ through the cracks in the concrete…”

My north-Alabama-bred mother loved bluegrass music, and I’ve always felt fortunate she bequeathed me that particular family gene. In the early versions of this song, Monroe’s mandolin starts at a breakneck speed and never lets off the gas. Not unlike a certain stolen Caddy.

Mitchell says “I get the urge for going/but I never seem to go…” And that happens to Missy Belue at one point in the novel, when she anchors at a rundown motel on a forgotten blue highway. Then the urge becomes too much, and she steals a Cadillac. Sometimes the urges win. (Note: This early 70s song was released as the b-side for “You Turn Me On, I’m a Radio.”)

Another '70s song, this time late in the decade. Another Canadian singer-songwriter. This song appears on one of my favorite Neil Young albums, Comes a Time. (I especially like the album cut because of Nicolette Larson’s harmonies.) The humans Missy Belue encounters on her highway—an aimlessly wandering cousin, a pair of AWOL Marines, the quirky owner of the Thoroughbred Motor Inn—keep her in constant turmoil…and constant motion.

Cash covered this Hank Snow song on her 2009 album, The List. If Missy Belue could sing, I imagine her voice would sound something like Cash’s on this track—low and slow, with plenty of smoldering attitude. This is a blues song with a definite fuck-you directed at somebody: “You had the laugh on me, so I’ve set you free/And I’m movin’ on…” Another “away from” tune.

“The Weight” The Band (The Last Waltz version)

While you might not think this song fits the “road” category, Levon Helm lets you know in the first line that it’s a traveling tune: “I pulled into Nazareth, was feeling ’bout half past dead…” The song doesn’t officially qualify as a 1970s release, but it needs to be on this list; throughout Whereabouts, Missy looks to take a load off and find a safe place to settle. (Note: “The Weight” takes on a new, wonderful texture in The Last Waltz version because of the appearance of Pops and Mavis Staples.)

This traditional folk and gospel song dates from the early 19th century, (including a bluegrass version by Bill Monroe), but when I dove down the musical rabbit hole, I rediscovered Harris’s cover from her 1980 album, Roses in the Snow. Harris invited bluegrass legends to play on this album: Tony Rice, Ricky Skaggs, Jerry Douglas. But it’s her voice that makes the road sound like the saddest place you could ever be.

One of Missy Belue’s meanderings takes her into north Alabama, where Jason Isbell is from, so it just seems natural to include this song, from his Southeastern album. Isbell’s lyric “Heart like a rebuilt part, I don’t know how much it’s got left” is a road mantra. Because whether you’re running from or heading toward, there’s always a chance something could break down.

There are a number of great versions of this song floating around, most of them stripped down live performances. But I love the way Childers does it on the album Purgatory, which Sturgill Simpson produced. I mean, if you listen with your eyes closed, the drums sound an awful lot like a big, stolen Cadillac humming down the road, especially when Childers sings, “It’s a damn good feeling to run these roads…”

This song doesn’t really have anything to do with the road or traveling. But years ago, when I was working on early drafts of Whereabouts, I’d stay up late writing. After midnight, every night when I finally had to shut it down, I’d listen to this song before I headed to bed. So when I think about the history of this novel, I always hear Lovett telling me, “The night’s all that’s left behind/You take your part, I’ll take mine…” Maybe it’s about traveling after all.

Scott Gould's previous book, Strangers to Temptation-a linked story collection the Atlanta Journal Constitution called a compulsive read and Foreword Reviews dubbed funny, often poignant, and not easily forgotten-was published by Hub City Press in 2017. His fiction and nonfiction have appeared in Kenyon Review, New Stories from the South, Black Warrior Review, Carolina Quarterly, Pithead Chapel, Garden & Gun, New Ohio Review, The Bitter Southerner, and Crazyhorse among others. He is a two-time winner of the SC Arts Commission's Individual Artist Fellowship in Prose and the SC Academy of Authors Fiction Fellowship. He lives in Sans Souci, South Carolina and teaches creative writing at the SC Governor's School for the Arts & Humanities.