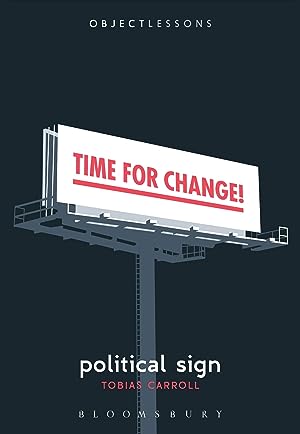 Tobias Carroll's Political Sign is another impressive entry in the Object Lessons series. Carroll explores political signs and their significance on our culture from past to present, illuminating their impact on both our culture and lives.

Mark Doten wrote of the book:

"We have long been taught to think about the politics of signs, but less often is this applied to political signs themselves-our yard signs and bumper stickers and billboards-these strange creatures of the American electoral landscape, some proliferating and gone like dandelions, others stuck in place like barnacles, even as years of political changes leave them as decontextualized fossils. In this brisk and encompassing work, Tobias Carroll examines and makes strange these instruments of power and change and reaction, offering us a sharp and unyielding look at everything that is on the surface that we still do not see."

In his words, here is Tobias Carroll's Book Notes music playlist for his book Political Sign:

Introduction // Kevin Morby & Waxahatchee, “Long Gone Blues”
For the most part, the songs on here are going to be thematic more than literal. The bulk of Political Sign was written during two residencies, one in Nebraska and one in Iceland, and the bulk of the music that I listened to when writing it was whatever was available on my Bandcamp account. Artists I listened to a lot included Six Organs of Admittance and Nathan Bowles, but I also developed a very soft spot for an EP of Songs:Ohia covers by Kevin Morby and Waxahatchee. Their take on “Long Gone Blues” ended up on repeat as I worked on the book’s introduction. Alternately, there’s a reason why one paragraph consists of the word “Listen.” The homage was a little more overt in earlier drafts, but I ended up dialing it back somewhat for the final version.

Chapter 1 // Wilco, “Ashes of American Flags”
Writing about political signs meant, among other things, writing about the suburbs in autumn. Wilco’s Yankee Hotel Foxtrot isn’t an album that has a particular association with the suburbs for me, but the way Jeff Tweedy’s lyrics juxtapose pastoral imagery with scenes of vivid protest have long resonated with me. Related: I cannot believe this album is almost 20.

Chapter 2 // The Feelies, “The Last Roundup”
Continuing in the pastoral vein: if I’m writing about New Jersey in autumn, The Feelies — specifically, their album The Good Earth — are going to work their way into the mix somewhere.

Chapter 3 // Dead Kennedys, “Rambozo the Clown”
And here’s where this playlist takes a turn for the more overtly punk rock. Writing about political signs in the modern era means writing about the ways advertising is used to sell candidates — and the Dead Kennedys’ satirizing of the blend of commercialism and politics still hits home.

Chapter 4 // Parts & Labor, “Changing of the Guard”
Writing this chapter involved revisiting the first decade of the current century, and the eminently frustrating/rage-inducing moments of the Bush/Cheney years. Much of the music of Parts & Labor addresses the toxic political scene of that era; it’s also the perfect blend of anthemic and raggedly noisy.

Chapter 5 // Billy Bragg, “Take Down the Union Jack”
At an event last month, I was asked my thoughts on flags as political signs. I’ve been thinking about that question a lot lately; I’m not sure if would have answered it the same way now as I did then if I was asked it again. But I also thought it would make sense to get Billy Bragg’s take on it, as his blend of lyrical agitprop and media literacy was a big influence on Political Sign.

Chapter 6 // Crass, “Do They Owe Us A Living?”
In Political Sign’s sixth chapter, there’s some discussion of Margaret Thatcher’s time in office. If I’m going to bring up Thatcher, it stands to reason that I should also invoke one of her musical foils in this playlist.

Chapter 7 // Sleater-Kinney, “Combat Rock”
And here, I think I’m just going to quote from the song itself: “Where is the questioning? Where is the protest song?/ Since when is skepticism un-American?”

Chapter 8 // Haram, “Where Were You on 9/11?”
The right protest sign can change the way you see an event or an issue. “Where Were You on 9/11?” by the great New York hardcore band Haram, takes a sentiment that’s been codified in certain aesthetic and political directions and uses it in a transformative manner. Doesn’t hurt that the song’s fantastic, too.

Chapter 9 // Brian Eno & Jah Wobble, “Spinner”
Trying to find a song that balanced some element of punk with some element of sports was not easy. In the end, I went with this collaboration from Brian Eno and Jah Wobble, as it contains some audio from a Tottenham Hotspur game, and I am nothing if not predictable.

Chapter 10 // Weakerthans, “Pamphleteer”
John K. Samson’s moving portrait of a lone figure trying to spark change is one that’s long resonated with me. It seemed to fit well with this chapter and its focus on different people trying to change opinions from the most unlikely places.

Interlude // Propagandhi, “And We Thought Nation-States Were A Bad Idea”
I’ll be honest — if I was going to write about my roots in punk, that meant going back to the '90s. And if I was going to do that, well, why not summon up a song from that era that I still cue up with an alarming frequency?

Chapter 11 // Priests, “Good Time Charlie”
As Political Sign reaches its conclusion, its focus shifts to the last decade or so — and so with the playlist, I wanted to make sure that I wasn’t just tapping into punk bands I listened to in my teens and twenties. Priests do a fantastic job of grappling with the dichotomy between ideals and bodies; for a chapter about political tattoos, that seemed like a perfect fit.

Chapter 12 // dälek, “Few Understand”
Political Sign’s 12th chapter deals with the way Barack Obama’s 2008 candidacy used signage in a very different way from what had come before — and how that reshaped American politics. The music of dälek seemed to fit neatly here, as they’re a group that’s also favored unconventional collaborations and bold use of imagery.

Chapter 13 // Irreversible Entanglements, “No Más”
Trying to find the line between art about political signs and political signs as art might well be impossible. The politically charged,haunting, and liberating music made by Irreversible Entanglements occupies a similar space for me: I’m not always sure I have the words to describe it, but it’s never stopped making me think or pushing all the right buttons in my brain.

Chapter 14 // Mourning [A] BLKstar, “These Hands Are Up”
In writing about the myriad ways that art and protest have begun to overlap in circa-now America (and the world), it seemed important to cite the work of an artist grappling with big ideas and taking a stand for what’s right. Cleveland’s Mourning [A] BLKstar made something that’s at once an elegy and a powerful statement of purpose; here, too, the fit seemed ideal.

Conclusion // The Soft Pink Truth, “Fuck Nazi Sympathy”
Political Sign includes a lot of discussion of the ways old and new techniques smash into one another and give rise to something unfamiliar yet bearing a powerful call. The Soft Pink Truth’s cover of Aus-Rotten’s “Fuck Nazi Sympathy” is a perfect musical illustration of this: one part experimental electronics, one part punk rage. And sadly, its message is all too relevant to 2020.

Tobias Carroll is Managing Editor of the literary website Vol.1 Brooklyn. He is the author of two books, Reel (2016) and Transitory (2016). His writing has been published by Vulture, Pitchfork, Rolling Stone, Hazlitt, Literary Hub, and The Paris Review, among other places