Jen Fawkes' Playlist for Her Story Collection "Mannequin and Wife" 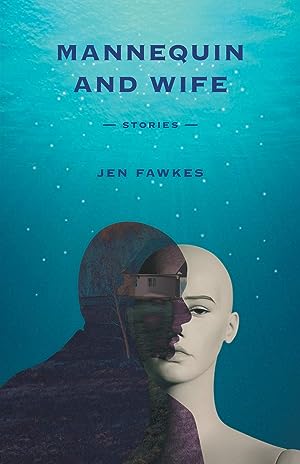 Mannequin and Wife is a brilliant debut, constantly surprising and simply beautifully crafted.

"Mannequin and Wife is magical in every sense of the word. These stories are eerie, funny, sharp, strange, devastating, joyous, brilliant―larger than life. I loved each one so much I never wanted it to end, until the next one started. A bravura debut from a bold new talent."

In her words, here is Jen Fawkes' Book Notes music playlist for her story collection Mannequin and Wife:

Mannequin and Wife has been called eclectic, quirky, darkly comic, and unsettling. My hope is that the book defies expectations, tilts the world, shakes things loose. I hope to unveil what we hide from ourselves, intentionally or no, and through such awareness, creep toward things like possibility, hope, and joy.

On one hand, Mannequin and Wife is a map of my obsessions: old things, genre-bending, classic Hollywood, femme fatales, Shakespeare, cannibalism, Technicolor, loneliness, the unexpected, coping strategies, nostalgia, melancholy, interpersonal strife, the unknowable-ness of other people (not to mention ourselves), the deep ironies of existence, dangerous women, and our all-powerful, all-consuming need for control.

On the other hand, Mannequin and Wife is a book about people. At the heart of each story is a fundamental pairing – parent and child, husband and wife, mentor and protégé, sibling and sibling. The songs I’ve matched with the book highlight the difficulty and joy of navigating the ties that bind us, ties that can feel – at once – like lifelines, tightropes, and nooses.

These eleven songs are dramatic, ironic, and emotionally unsettling. They explore the territory that stretches between attraction and repulsion, pleasure and pain, comedy and tragedy. But also: my first aspiration was to be a Solid Gold dancer, and my second was to be a Fly Girl, so they have a good beat, and you can dance to them.

“Jolene” and I entered the world the same year, so she’s been there from the start. This song taught me a good deal about the similarities between romantic love and a battlefield (my apologies to Pat Benatar). When I was a child, Dolly Parton seemed to me a busty angel, but in young adulthood, I became fascinated by her feistiness, her celebration of her own trashy impulses, her ability to seem ever-at-ease. In “Jolene,” Dolly confounds the roles available to women living in a patriarchy, by fighting for her man. This song is in conversation with several stories in Mannequin and Wife, among them “Double Helix” and “Mannequin and Wife.”

“She appears composed, so she is, I suppose / Who can really tell? She shows no emotion at all / Stares into space like a dead china doll”

I found Elliot Smith’s music only after his death, but he speaks to me from beyond the grave. I can think of no other artist who so embodies the suffering that is specific to our age of anxiety. Smith’s songs are a balm for those of us whose hearts are forever a-boil. I chose “Waltz #2 (XO)” because it’s a rocker, and its refrain twists like a benevolent blade into me: “I'm never gonna know you now / But I'm gonna love you anyhow”. Love is possible, even if knowing others isn’t. This song is thought to be about Smith’s mother, and is in conversation all of Mannequin and Wife, including “Call Me Dixon” and “Well-built Men, 18 to 30, Who Would Like to Be Eaten by Me.”

This song slaps and is one of the most sampled of all time, but “Clean-up Woman” is on my list because it deals with a different sort of femme fatale – a woman who is not a danger to men, but to her fellow females. This song perfectly illustrates the ways women are pitted against one another in our society. I’m also a fan of wordplay, so the recasting of a “clean-up” woman as a man-stealer, rather than a floor-sweeper, makes me smile. Among other pieces in my book, this one is in conversation with “Hobbled” and “Sometimes, They Kill Each Other.”

My greatest challenge in making this list was deciding which Madonna song to include. I was nine when she broke onto the scene, and I wore all the rubber bracelets, bangles, and lace anklets we could afford. More than anyone else, Madonna taught me what it is to be a woman in the modern era. I chose “Like a Prayer” because it marks the moment when Madge stopped vamping in the one of the “acceptable” modes (dominatrix or kitten) and started crossing more vivid lines – cross-burning, interracial kissing. Also, she went brunette for the video. So! This song is in conversation with many of the book’s stories, including “Options Counseling” and “Iphigenia in Baltimore.”

What appeals to me most about this song is its juxtaposition of poppy, reggae-influenced music and pitch-dark subject matter: gritty crime shows, unheroic heroes, and dangerous women. The song is a commentary on several important things – the ways television and film have anesthetized us to violence, our society’s accepted and universal objectification of the female body. “Watching the Detectives” is perhaps most in conversation with “Come Back, Rita” and “The Tepid Tears of Orphans.”

“Little boy, she's from the street / Before you start, you're already beat / She's gonna play you for a fool / Yes it's true”

I’m a bit obsessed with the irony of “femme fatales,” with the notion that any flesh-and-blood woman could embody the term, a characterization clearly derived from the male gaze. The tragic lives (and deaths) of this song’s singer (bohemian chanteuse and superstar addict Nico) and the woman about whom it was written (heiress and “Poor Little Rich Girl” Edie Sedgwick), effectively highlight the empty rhetoric of the term “femme fatale.” Still, a part of me wants desperately to believe that it is possible for women to wield such power. This song speaks to several of Mannequin and Wife’s stories, among them “We Can Learn from the Sawhorse” and “By the Numbers.”

“Take me now, baby, here as I am / Hold me close, try and understand / Desire is hunger is the fire I breathe / Love is a banquet on which we feed”

A woman waits for a phone call from her lover, a call that never comes, which makes her angry even as it fills her with desire: story of my life! Written (and often performed) by Bruce Springsteen, “Because the Night” explores the ambiguities, the inherently twisted nature of romantic pairings, especially when sung by Patti Smith. The song is also a scorcher that’s been covered by many talented artists (I also love Natalie Merchant’s 1993 cover). “Because the Night” highlights the ways in which love and pain, sex and anger, damage and desire are inextricably linked. This one is in conversation with (among others) “Chrysalis” and “Victoria.”

“So, I came to her room and opened the door / Oh, snap, guess what I saw? / A fella tongue kissin' my girl in her mouth / I was so in shock, my heart went down south”

“Just a Friend” is full of twists – lyrical, stylistic, figurative. Even as it objectifies women, the song flips the script on its male speaker. Biz is trying to have a side thing with a woman who’s already having her own side thing. Oh snap! The vulnerability of the male speaker, the triumph of the female, the irony of the video – in which Biz delivers the badly-sung chorus seated at a piano, wearing a powdered wig – all conspire to make this track an unmatched gem. An aside: I once spied Biz in the Denver airport, which is my all-time favorite celebrity sighting. “Just a Friend” is in conversation with “Flight of the Businessman” and “Dear Delores Dale.”

“You know you've changed, and your words they lie / That's something you can't deny / I know there's something going on”

As a child, I only saw MTV at friends’ houses, since cable was out of our reach. The video for “I Know There’s Something Going On” was in heavy rotation in 1982, and I was mesmerized by it. Photography, voyeurism, a trench coat, a large stuffed panda, yes, but I think what intrigued me most was Frida’s deadpan expression, the way she exhibited no emotional reaction to her man’s infidelity. Today I see this song as a celebration of paranoia, which can be more useful than one might think. Yes, Frida. There is something going on. There’s always something going on. This song was produced by the inimitable Phil Collins (who also played drums), and is in conversation with stories like “Possible Wildlife in Road” and “Breach.”

I listened to this one extensively in college, a track that is its own ecstatic, snarling, prowling mood. Beth Gibbons shifts modes vocally – swinging from winking irony to unbridled emotion – and the song’s message is equally ambiguous. Rather than focusing on one of the roles society has deemed permissible for females (temptress, kitten, crone), this speaker seems to be trying to navigate them all, and if there’s a more fitting sonic depiction of womanhood, I’ve not come across it. And it doesn’t hurt that “Glory Box” so brilliantly samples Isaac Hayes. This song is in conversation with stories like “Insight” and “Burro.”

I love the Stones version of “Dead Flowers,” but since it’s a country song, I’m including the Townes Van Zandt version here. Mick Jagger once said that his voice was all wrong for country, and I must agree. The best country music tends to employ irony, and irony is most readily wielded by those of us who stand on the outside. Also: there is no more apt symbol for the heady love-hate that fuels the sort of relationship depicted in “Dead Flowers,” than dead flowers. This one is in conversation with every story in Mannequin and Wife, among them “Mastermind” and “Rebirth of the Big Top.”

Jen Fawkes is the author of Mannequin and Wife: Stories (LSU Press, Sept. 2020), and the forthcoming Tales the Devil Told Me (Press 53, May 2021), winner of the 2020 Press 53 Award for Short Fiction. Her work has appeared in One Story, Lit Hub, Crazyhorse, The Iowa Review, Joyland, The Rumpus, Best Small Fictions 2020, and other venues. She is the winner of numerous prizes, including the 2019 Pinch Award in Fiction and the 2019 John Gardner Memorial Fiction Prize from Harpur Palate. She lives in Little Rock, Arkansas, with her husband and several imaginary friends.