Andrew Wedderburn's Playlist for His Novel "The Crash Palace" 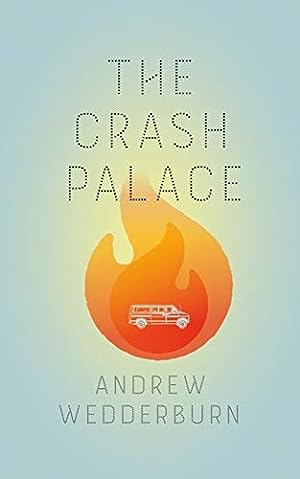 Andrew Wedderburn's moving and funny novel The Crash Palace has music at its soul.

Quill & Quire wrote of the book:

"Wedderburn’s prose has an alluringly musical style [...] Wedderburn leaves it up to us to devise our stories and figure out our own answers, adding to the book’s overall charm and mystique."

In his words, here is Andrew Wedderburn's Book Notes music playlist for his novel The Crash Palace:

There is a lot of music in this novel: old cassettes that the characters love; a van-full of touring musicians; a secret club in an old building in the wilderness. And then of course there’s the kind of music that you turn to when you’re writing, to help you create the mood and access different feelings and memories and emotional states. So this playlist is a bit of all of that—songs for specific characters, songs for scenes and situations, and songs that helped get me in the place to write it all.

Raw-Hide – Link Wray and The Raymen

Audrey Cole learns to drive in her father’s old pick-up truck, the glove-box of which is full of surf music cassettes. Driving is a core part of Audrey’s identity—being free and alone on an unexplored highway with no particular direction in mind. And the soundtrack to that freedom is Dick Dale, The Ventures, The Pyramids, Jack Nitzsche, and especially Link Wray, who quickly becomes her favorite.

What A Way To Run A Railroad – Huevos Rancheros

The novel is very much built around Calgary, Alberta, which is was my own home for a long time and becomes Audrey’s home too. When I was discovering live music in Calgary in the mid-'90s, there was a whole incredible garage rock scene that was a little bit punk-rock, a little bit rockabilly, a little bit surf music. And one of the greatest Calgary bands ever was Huevos Rancheros, who were the leading evangelists of Link Wray style instrumental rock. I imagine that Audrey would have known and loved Huevos Rancheros, and I can picture her keeping a cassette recording of this album with all of her Dick Dale tapes.

Me and Paul – Willie Nelson

I spent twenty years in different rock bands, half of that with a group that toured Canada fairly extensively. We played a lot of empty bars on Tuesday nights in places like Kitchener, Ontario and Kamloops, B.C. That experience is the source for The Lever Men, the band that Audrey starts driving around early in the novel. I played in Fugazi-style post-punk bands, and The Lever Men are an instrumental country-surf thing, but the day-to-day, night-to-night experience of loading the gear in and out of the van, up and down the stairs (there are always stairs) in and out of the empty bars, is always the same. This song by Willie Nelson is the perfect summary of how it all feels.

Tired of Waking Up Tired – The Diodes

This is one of the foundational tunes of Canadian punk rock—it’s kind of a Canadian “Personality Crisis.” Rodney Levermann, the front man of The Lever Men, would have been a contemporary of this group. This song would have been in his blood every bit as much as anything by The New York Dolls or The Stooges. I love the sound and feel of it so much—if you’re going to have a special home-grown classic for your country, you can’t do much better than this tune.

It took fourteen years between writing the first scenes of Audrey buying and selling $50 cars to finally holding the published novel in my hand. I had a look at my iTunes app and it tells me that this is the song I listened to the most in that time. There’s a particular texture and feel that Howlin’ Wolf creates that you can’t get from any other artist. The way that Hubert Sumlin stings you with those guitar lines is like nothing else. The rhythm and pace and pulse of this song can take me out of whatever state I’m in and just clear everything out and lull me into where I need to be to type and type and type.

There aren’t any songs about cars on this list, but this is a song about a motorcycle. When I imagine Rodney playing the guitar I hear a mix of Billy Zoom and Richard Thompson. What’s so remarkable about Thompson is how he can sound like anything but always sound like himself—he can effortlessly create any style or mood or genre, but it’s always voiced in this way that’s distinctly him. I feel like an acoustic open-tuned finger thing like this would totally be in Rodney’s wheelhouse.

You Can’t Put Your Arms Around a Memory – Johnny Thunders

What I love about this song, no matter how many times you hear it, it never stops being so acutely, unbearably sad. There’s a part where the character Johnny Thunders is sneering through the perfect ironic distillation of the whole I-don’t-care-I-care persona of early punk rock. And there’s a part where Johnny Thunders the person is genuinely singing to you about how sad and all alone he is. It’s perfectly balanced and never stops getting to me.

When Audrey is at the Crash Palace, a few of the characters say to her, “If you think this is something, you should see it when we do dance music” —implying that the crowd there for The Lever Men is nothing compared to the nights they have electronic DJs. Primal Scream obviously isn’t electronic dance music, but for me it’s a touchstone to the kind of thing that was playing at nightclubs when I was a teenager getting exposed to that culture for the first time. “We want to be free and do what we want. And we want to get loaded!” could be a mantra for a number of characters in the novel—that’s what Alex Main is making happen out there in the wilderness.

I had a few different DJ jobs in my early thirties. I did a garage rock Monday night where I played Stooges songs to an empty bar. I did a jazz night in a cocktail lounge. And for about 18 months, a friend of mine and I did a dance night in a pub. This was in the mid-2000s and we played the kind of dance-rock, electronic-adjacent stuff that was big in the mid 2000s. We’d fill the room and people would dance.

I don’t listen to many of the songs that we played on those nights anymore, but this tune sticks with me. I love the weight and texture of it. When I hear it, I can imagine being up there in the DJ booth at quarter past two in the morning watching the room deeply in the throes of all the things that happen at quarter past two in the morning in a busy bar. There’s a lot of that kind of post-last-call fuzziness at the Crash Palace, and this tune puts me in the headspace for it, where I can smell and hear it all.

This song is a very specific kind of magic. It’s like a ritual to get to a certain internal place—for stopping time and stepping outside of the normal world. The novel plays with ideas about magic in a few ways: there are a couple of magicians, and some specific fairy tale structures and references. I think “Nefertiti” is very much the kind of magic that’s invoked. It is so brittle and sparse and lonely sounding, and so painfully beautiful. You can’t put this song on in certain circumstances. But when the time is right, there’s nothing else like it.

Time To Buy A Futon – SNFU

All of the bands in the novel are fictional, except for a couple of Calgary Easter eggs mentioned on posters, and SNFU, who Dick Move and Hector Highwater discuss at length. Alberta in the 1980s was a long way from anyplace, but there was a punk rock touring circuit that DOA had established, that brought the SST bands like Black Flag and the Circle Jerks through town. More importantly though, we had SNFU, who were from Edmonton, and were on the leading edge of the skate-thrash scene. When I was a kid I remember older kids wearing SNFU t-shirts, and having no idea what it meant, except that it must be something really important that I absolutely had to learn about.

Hard to Be Human Again – Mekons

I think that Rodney would have spent a lot of time in the '80s in bands that sounded like the Mekons. Fear and Whiskey is such a wonderful, strange record. It’s weird and jerky-jerky and awkward. It’s country and punk but also oddball '80s UK college rock. It’s English in really English ways, like Doctor Who or Coronation Street. But it’s also beautiful and emotional and touching and deeply human.

Torn And Frayed – The Rolling Stones

This is a good coda for the Lever Men and where they finish up at the end of the novel. I think this song would have been a number in their repertoire that they could have pulled out and killed at any given time. “Doctor prescribes / drug-store supplies / who’s gonna help him to kick it?”

Andrew Wedderburn is a writer and musician from Okotoks, Alberta. He graduated from the University of Calgary in 2001. His stories have been published by filling Station and Alberta Views Magazines. His debut novel, The Milk Chicken Bomb, was published by Coach House Books in 2007. In 2008 it was a finalist for the Amazon / Books in Canada First Novel Award, and long-listed for the International IMPAC Dublin Literary Award. As a musician and songwriter Wedderburn has written, recorded and toured extensively in the groups Hot Little Rocket and Night Committee, releasing seven full-length albums over the last two decades. Andrew Wedderburn currently resides in Okotoks, AB.