Robert Jones Jr.'s Playlist for His Novel "The Prophets" 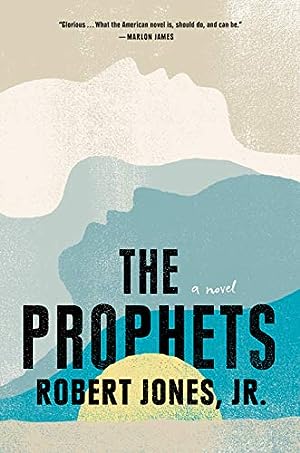 Robert Jones Jr.'s novel The Prophets is a startling debut, a love story filled with exceptionally drawn characters both tender and cruel.

The New York Times Book Review wrote of the book:

"[An] often lyrical and rebellious love story...Jones seems to be reaching across centuries of blood and memory in an attempt to shake awake a warrior armed with weapon and wit that lies sleeping in his imagined, beloved, Black reader....Jones proves himself an amazing lyricist, pulling poetry out of every image and shift of light....What a fiery kindness that ending, this book. A book I entered hesitantly, cautiously, I exited anew—something in me unloosed, running. May this book cast its spell on all of us, restore to us some memory of our most warrior and softest selves."

In his words, here is Robert Jones Jr.'s Book Notes music playlist for his novel The Prophets:

It was somewhat difficult to compile a musical playlist for The Prophets because the book takes place in eras that predate recorded music, which severely limited my options if I was seeking to be historically authentic. So rather than strict authenticity, I relied primarily on emotion in the selection process. These songs evoke in me the same feelings or moods conveyed in particular passages.

“No More Auction Block For Me” by Sweet Honey in the Rock: This song reminds me of two characters in The Prophets—Maggie and Samuel, both of whom make decisions that draw a line in the sand in terms of their own liberation. They mean not to be anyone’s chattel and are willing to go to desperate extremes to ensure that. They really, truly mean “give me liberty or give me death.” The harmonious balm of a way in which this sentiment is conveyed by Sweet Honey in the Rock belies the fact that it is also a sword.

“I Heard The Voice Of Jesus” by The Famous Ward Singers: When Amos experiences a transformation shortly after converting to Christianity, the swirling of it all is at once confusing and comforting. The way in which The Famous Ward Singers sing—in that old gospel style harmony—reminds me of that tradition, like a heavenly choir watching over someone being baptized for the first time and welcoming them into the Christian way of being.

Matondoni Wedding Song (Traditional African Tribe Musicians): As I wrote of Kosii and Elewa’s ceremony, I heard music very similar to this in my head. The drums, the clashing of metal instruments, and the chanting all combining to reach the heights and frenzy of celebration. I can actually visualize the joy when I hear this.

“Sissy Blues” by Ma Rainey: The fact that Ma Rainey was singing about queerness this early in Black cultural production is astounding. The tensions described in the song (that arise from Black people not performing in their socially defined roles) captured, for me, the entire tension at the center of The Prophets in regard to Samuel and Isaiah’s love and how it’s seen by those who surround them.

“Crucifixion” by The Roberta Martin Singers: This feels like a song one might sing at a funeral and that was really the energy I felt at certain points in the book when certain characters met certain fates. It’s a heavy song, heavy vocals and heavy lyrics; and that weight has a color: blue. And it lays itself on many things in the book and I’m certain this song is the sound that burden makes.

“I’m Gonna Lay Down My Life For My Lord” by Bessie Jones: Often, to keep time and to pass time, and also to pass messages, enslaved people would sing while they were forced to work. To listeners, it sounded as though they were happy. Those listeners were mistaken. They were sad, angry, and ready. Despite its submissive lyrics, this song sounds like that to me: ready. Ready to lead. Ready to fight. Ready to be free.

“I Be So Glad When The Sun Goes Down” by Ed Lewis: This is a work song, but I also interpret it as a love song expressing a longing not just to rest, but to lie down beside a loved one, to be intimate, to make love after a long day of toil. That is exactly what I tried to capture in Samuel and Isaiah’s relationship.

Akamba Witch Doctor: Traditional African Tribe Musicians: This song makes me think of my ancestors, particularly the ones I’ve never met, who were in their own lands before they were kidnapped, who maybe made it to these cruel shores, or who, instead sacrificed themselves rather than be enslaved. There is a kind of old wisdom in this and I tried to capture this same sense in the chapters in The Prophets where the ancestors speak in direct address.

“There Is A Balm In Gilead” by Mahalia Jackson: I have a similarly named chapter in the book, a chapter about healing. And that’s what Mahalia Jackson’s voice sounds like: a healing. Somber, gentle, patient, warm, like hands laid on bodies that need touch. I can see the women of “the circle”—Maggie, Essie, Sarah, Be Auntie, and Puah with their hands raised, channeling something not many have access to in order to do some small act of good in an evil place.

African Drums Of War: Drums World Collective: Deceptively simple, this song has a very distinct purpose: to gather people for war. This is old, predating Western society certainly. But it also carries resonance for something like a slave revolt. There is something very Black about the methodical way in which this song builds, emulating the ways in which consciousness building works so that change becomes opportune.

Robert Jones, Jr., was born and raised in New York City. He received his BFA in creative writing with honors and MFA in fiction from Brooklyn College. He has written for numerous publications, including The New York Times, Essence, OkayAfrica, The Feminist Wire, and The Grio. He is the creator of the social justice social media community Son of Baldwin. Jones was recently featured in T Magazine's cover story, "Black Male Writers of Our Time." The Prophets is his debut novel.