Julia von Lucadou's Playlist for Her Novel "The High-Rise Diver" 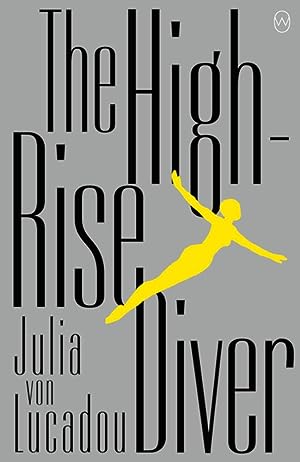 "A searing work of speculative fiction."

In her words, here is Julia von Lucadou's Book Notes music playlist for her novel The High-Rise Diver:

Of all the art forms, music is the most emotional to me. In my novel The High-Rise Diver, music only exists at the fringes of society because the world the novel portrays is all about controlling emotion. My two main characters, Riva and Hitomi, have been trained to function like machines. Riva, the high-rise diver, is a successful athlete. For her dangerous, highly aesthetic performances she needs to be in perfect control of her mind and body. Hitomi is a psychologist tasked with analyzing and fixing Riva when she suddenly quits her career. Hitomi has been brought up in a ultra-capitalist childcare institute where she was taught that emotion makes you unproductive. But despite all their training, neither Riva nor Hitomi can keep their inner music from wanting to burst out.

“Watch Her Disappear” by Tom Waits

“You dance into the shadow of a black poplar tree. And I watched you as you disappeared.” This is the song I probably listened to most while writing The High-Rise Diver. It put me straight into Hitomi’s mind, watching Riva sweat in the summer heat in her apartment through hidden cameras. Just like the woman in the song, Riva is an object of desire and an enigma. Even though Hitomi obsessively follows and analyzes her every move, Riva still eludes her. She seems to disappear right in front of her eyes, dancing into the dark.

“Gnossienne No. 1” by Eric Satie

There is a beautiful improvisation by dancers Sergei Polunin and Kristina Shapran to this song which reminds me of the characters in my book. The music as well as the dance are somber, cold, and controlled, but there are glimpses of humanity: the scars and tattoos on Polunin’s body, the wild hair, the raw emotion on the dancers’ faces. While writing the novel, there were times when my characters went off-script and did unexpected things. Those became the most important scenes to me because they meant that even in a futuristic, ultra-capitalist world, human “faultiness” could not be optimized away.

Dance was an important source of inspiration for The High-Rise Diver. Sergei Polunin and Riva, the “dancer of the sky,” have a lot in common. Polunin often speaks about the time before he started ballet as the happiest time of his life, since being a star athlete comes with so many restrictions. On the other hand, you can tell dance is such an important form of expression for him. Riva is the same. She loves high-rise diving, it suits her, and she brings creativity to it, but at the same time it imprisons her in the perceptions and expectations of her audiences and competition judges and confines her life to a rigorous training schedule.

“Territory” by The Blaze

The French music duo The Blaze’s electronic soundscapes and the visual style of their music videos would be such a great fit for a film version of The High-Rise Diver (I wish! ha ha). Before I became a novelist, I worked in film and television. And you can probably tell from the narrative style of the novel, which is told mostly through the gaze of surveillance cameras, that I am still a visual storyteller at heart.

The song “Territory” deals with a longing for home, which is also a theme in my novel. In the book, people mostly grow up in the peripheries of the city, in poverty and without their so-called biofamilies. They have to show off their abilities and talents during regular casting competitions until they are awarded one of the coveted trainee positions for a career within the security of the city limits. But in spite of all the luxury the city provides, it never seems to satisfy their longing for home, for a place where they are loved.

“Sleep” by Godspeed You! Black Emperor

The post-rock band Godspeed You! Black Emperor has always been one of my favorites. Maybe because they are Canadian and I love everything Canadian. Even though I am German born and bred, my inner home will always be Vancouver, Canada, where I spent some very happy years. It is also the place where I finally decided to quit my high-pressure job in television and write The High-Rise Diver to work through my own entanglement with our modern-day meritocracy. The nameless, nationless city in the novel was inspired by Vancouver’s shiny, beautiful, but eerily soulless waterfront properties and the rapid gentrification I witnessed there.

One of my favorite characters in the book is named Zarnee and this is his soundtrack. Zarnee embodies the peripheries, wild, ragged, glamorous, and unafraid—like this song. Whereas Zarnee values the peripheries for the freedom they offer outside the control of productivity and surveillance, Hitomi is driven by a deep fear of the peripheries. She does everything she can to avoid being sent to this place she views as dangerous and disgusting. Her work and her life are constantly evaluated and every mistake she makes can mean a loss of financial credit, status, and eventually her privileged place in the city. As much as I identify with Hitomi’s plight, I also think that this fear and, on its flipside, the promise of wealth and security might be the biggest motivators in capitalist society, putting us, like her, at risk of manipulation.

“Take me Home” by Perfume Genius

“I’ll be so quiet for you. Look like a child for you. Be like a shadow of a shadow of a shadow for you,” Mike Hadreas, aka Perfume Genius, sings in this track. This is a mantra for a lot of my characters. Hitomi and Riva have become shadows of themselves, adjusting to the expectations of the high-performance, high-tech society they live in, until it’s hard to tell them apart from the bots they work with. Zarnee, on the other hand, quite literally pretends to be a child sometimes. He works for an agency that rents out family members to lonely people, so they can feel part of a biofamily.

“I’m A Mother” by Perfume Genius

I listened to Perfume Genius a lot while writing, which is why I included three of his songs on this list. This one reminds me of Hitomi and her relationship with her biomother who put her into a high-class childcare institute as a baby and then slowly distanced herself from her. Hitomi longs for motherly love but doesn’t allow herself such strong, unproductive emotion. In my favorite scene of the book, Hitomi, unable to sleep, uses a motherbot and is soothed more by its simulation of a loving mother than she ever was by her real relationships.

“One or Two” by Bodi Bill

The electronic music of the German band Bodi Bill feels futuristic in a down-to-earth way, appropriate for my novel, which hovers somewhere in that grey area between science fiction and contemporary novel. This song especially reminds me of my character Andorra, Hitomi’s best friend, with whom she grew up at the childcare institute, and who completely vanished from her life for mysterious reasons. Andorra, a charismatic free spirit, was the only person who ever truly loved Hitomi and the only person she ever loved. Their connection and the hole Andorra left in Hitomi’s heart when she vanished can be felt throughout the book—and in this song. “I call your name but you’re not there. I try to catch breath in your thin air.”

“I've been tearing around in my fucking nightgown. 24/7 Sylvia Plath,” sings Lana Del Rey in this ode to her favorite poet. It is no coincidence The High-Rise Diver starts off with a poem by Sylvia Plath. The book begins, after all, with a woman suffering from depression, despairing at the state of the world and her place in it. But just like Del Rey’s song, my novel is not meant to depress, to despair, or to tear down hope. One might think that authors write dystopian novels because they have lost hope but to me it is the opposite. My reason for writing this novel was a strong belief that we can change things for the better. So let’s end this list like Lana Del Rey ends her song: “Hope is a dangerous thing for a woman like me to have. But I have it. Yeah, I have it. I have.”

Julia von Lucadou was born in Heidelberg in 1982. She studied film and theater at Johannes Gutenberg University of Mainz and Victoria University of Wellington and earned her PhD in Film Studies in 2015. Lucadou worked as both an assistant director and a television editor prior to writing The High-Rise Diver, her debut novel, which was nominated for the Swiss Book Prize in 2018. She splits her time between Biel, New York, and Cologne.