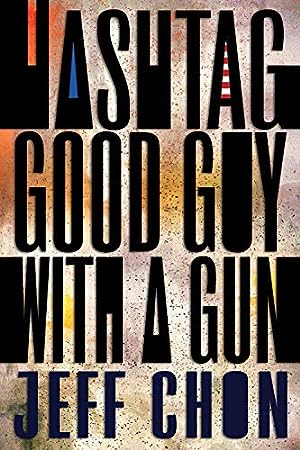 Jeff Chon's novel Hashtag Good Guy With a Gun is a satirical and startling debut, an important book for our times.

Tom McAllister wrote of the book:

"Hashtag Good Guy with a Gun is one of the boldest, smartest, and weirdest books I've read in years. I haven't seen anyone, anywhere, write so expertly, clearly, and empathetically about the ways online culture is wrecking young men. Jeff Chon pulls off a remarkable feat in this novel, tackling dark and frightening subject matter in a way that never feels overbearing or preachy. Plus, it's funny."

In his words, here is Jeff Chon's Book Notes music playlist for his debut novel Hashtag Good Guy With a Gun:

Hashtag Good Guy With a Gun is about a would-be mass shooter who becomes a folk hero after foiling the plans of another mass shooter. It’s also about the 2016 election, Catcher in the Rye-based conspiracy theories, Pizzagate-style ridiculousness, and the radicalization of toxic young men. These songs were culled from a much longer list of music I listened to while writing the novel. I chose the songs I felt fit thematically, rather than stuff I mostly listened to in order to stay alert—these were the songs that really got my brain going in very interesting ways. It really does feel like a soundtrack to my book.

It strikes me calling a song “Bastille Day” and then talking about the Reign of Terror seems a bit ahistorical, but employing ahistorical accounts to push apocalyptic agendas seem to kind of be our thing lately.

“Search and Destroy,” by Iggy and the Stooges

As I’ve gotten older, the badass energy of “I’m a street-walking cheetah with a heart full of napalm” has been replaced with something a little sadder. To me, it seems the narrative persona of this song knows he’s dangerous and is begging for us to either save him or put him out of his misery. I find his pleas for salvation very moving. Iggy’s vocals also make him sound like a weenie, which just adds to the sense of vulnerability.

“Give Me the Cure,” by Fugazi

The lyrics are oblique enough to apply to any sort of desperate yearning we might have. Teen angst is such a dismissive term. It sucks to be a young person. It’s a scary world. Imagine living in it, knowing it wasn’t a world of your own creation, but that of the adults around you. We should be nicer to young people.

Cho Seung-Hui, the Virginia Tech shooter, was obsessed with this song, and I can honestly see why. In a lot of ways, it’s like “Give Me the Cure” (which I’m sure the punk rock boys will love hearing) in that both are songs about begging for some kind of sign. It really is one of those songs we’re too cool to admit is actually good.

They were so much better when they were funny. We should always strive be more funny. I like to think my book is funny in the same kind of way, the way temper tantrums seem funny when they’re not our own.

The lyrics kind of sum of the process of composing this novel, while also being a very good representation of rage swirling inside the skull of my “protagonist.” It’s funny now that I’m out of it. Just an absolutely unpleasant song, to be honest.

“Goodbye to Love,” by The Carpenters

Just a beautiful song about giving up after having your heart broken. I used to live near the Carpenters’ home in Downey. Every once in a while, when I’d drive to the mall, I’d see people taking pictures in front of it. Just seemed so morbid.

Did I want to transition from Karen Carpenter to Henry Rollins? Yes, I did. Do I feel this swing in mood and tone describes this novel’s ethos in a very specific way? Sure, absolutely.

“What a Fool Believes,” by The Doobie Brothers

This song shows up in what I consider to be a really funny moment in the novel. Part of why I find it so funny is because if there were a credit sequence to novels, I’d like this song to play during mine. She’s not into you anymore. You’re not winning her back. Let it go, man.

“I Love the Sound of Breaking Glass,” by Nick Lowe

The idea of lashing out because you need to feel something. It’s so catchy, you find yourself bobbing your head and smiling as he sings about destroying things in order to forget how utterly alone he is.

“Touch Me I’m Sick,” by Mudhoney

I appreciate the confrontational nature of this song. “I am all these bad things you think I am, so let me infect you because you’re no better than me. Join me.” This is what internet trolling is, in a lot of ways.

“Point of Disgust,” by Low

The idea of holding onto things, knowing you aren’t the right person to be holding it is such a sad and lovely idea.

It’s frantic, violent, and comically grotesque. The rapid-fire falsetto, the menacing baritone, all the shifts in temp—there’s a playfulness to the composition that I hope I was able to capture in my book.

“Street Spirit (Fade Out),” by Radiohead

The sense of hopelessness in this song gets me every time. “Immerse your soul in love,” he says. How can I do that after everything I’ve seen and everything you’ve shown me?

The refrain was an epigraph at one time, but that eventually disappeared when I realized nothing was lost by cutting it (who knew one of my Darlings would be someone else’s words?). I can’t think about the final act without thinking of this song—everything leads here because it’s where people like this end up.

Jeff Chon's stories and essays have appeared in The Seneca Review, The Portland Review, Barrelhouse, Juked, and The North American Review, among other fine places. He currently lives in the Bay Area with his wife and children.