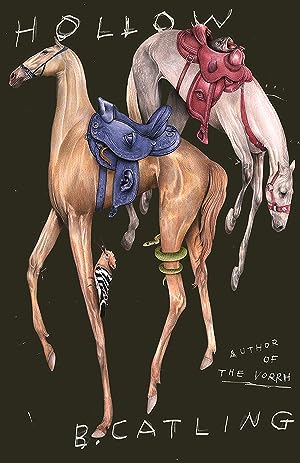 Brian Catling's Hollow is a smart and entertaining novel that is fantastic in all the best ways.

"Fascinating . . . With lush, erudite prose and a large cast of darkly eccentric humans and monsters, this spellbinding slipstream novel from Catling feels like stepping into one of Hieronymus Bosch’s playfully macabre paintings."

In his words, here is Brian Catling's Book Notes music playlist for his novel Hollow:

Perfect dark mood music to marinade in. Conjuring moonlight and snow filled forests. Rich with a sad, mournful grandeur that is echoed between a stately tenor voice and the swollen night depth of saxophone, woodwind, and strings. An experiment in Renaissance song, Dowland’s tearful ode given a resonant black Cadillac edge.

A stunning powerful version of an ancient Scottish ballad; blood everywhere, a crime in the family denied.

Don’t let the fact that it is almost impossible to understand put you off. There are words here that are centuries old, stirred deep in an impenetrable dialect, which is as thick as the land.

This English demand to be understood. Once the first three words are finally heard the rest will fall into place and the listener will be immersed in its tortured regret and passionate guilt: A masterpiece. Here is a clue… ‘What’s that blood upon your sword?’

"I Am a Fly" by WIRE from Chairs Missing

The best fly song in the world. Raucous, low-life momentum concealing its intelligence and poetry between grating rhythms and insistent manic drive. A primal high, shrill note in divine punk. Music to maim by or at least irritate others. I have never learnt to drive, but this inspires me to fantasize about driving fast and badly. Soundtrack to a life I almost had and would never have been able to write.

"Part One." by Keith Jarrett from The Köln Concert

My old pal Ray Cooper, master percussionist and film producer, first played me The Köln Concert in his apartment overlooking the seething Thames. I had never heard anything like it and was astonished when he told me it was jazz — not a musical genre that I am automatically attracted to. There is something about Jarrett’s phrasing and rhythm that quotes the ancient while being feverishly contemporary. His grunting and pedal-pounding makes it immediate and mesmerizingly feral. I even took piano lessons in a vain attempt to do it myself. Failed miserably but challenged my daughter to do it for a cash bet. She did.

A sublime fervour of the joy in faith. A magnificent clash of cultures that weds grace to power in a celebratory mass of voice and drum. I have this with me all the time. I use it to drive my imagination further and power up any slumps of doubt. There is possession and piety here, a very rare combination; it also runs an artery directly into the pulse of my writing. The clash of HOLLOW’s carnival and lent could dance to this and drive out the malice of inquisition.

I have loved Shirley Collins’s voice and choice of songs for as long as I can remember. In all the seasons of its truth and clarity, from the lilting early summer of her youth, to the rich, empowered, melancholic dignity of her 80s: And it's from that, her return to singing, I have selected this ode of terror and blood, recorded in her own modest cottage in her beloved East Sussex. The outstanding team of musicians and technicians cramped into its confines: Channelling an astonishing distillation of history, mystery, and commitment. And midway she had the genius to open her kitchen window and let the darkness of this song be trespassed by the kind incandescence of birdsong. A perfect work, heartfelt and demanding, with a resonant echo in her mature voice, which takes the listener to the absolute now of what folk music means, and shows us a landscape that was always there, solid, haunted, luminous, and enduring.

"Farewell to the Gold" by Nic Jones from Penguin Eggs

Nic Jones’s voice and fingers are full of laughter. It bounds and flutters in every fret and string, every utterance and syllable. This gives his songs a buoyant, anti-gravitational energy even when the tale being told is a troubled one. Penguin Eggs was a best seller in its time, bought by many who would have spat on it if they knew it was classed as ‘Folk music’. I often play Nic Jones in my sculpture studio when I am alone, struggling with materials and processes, using the life in this song to buy more energy and time.

"The Way Through the Woods" by Peter Bellamy from Mr Bellamy, Mr Kipling & The Tradition

Two for the price of one: My favourite ghost poem put to music and sung by the other great voice of English folk. A voice tuned to shanty and raw as a skinned concertina. An acquired taste: Bellamy roars and whispers inside Rudyard Kipling’s dazzling vocabulary of evocative twilight and matches both the canter of a spectral horse and the otter whistling its mate.

The most recent of the crop from a stunning debut album, a new voice trained through opera and tempered in disaster, pitched in prophesy.

She walked clear of a crashed, flaming Boeing 737, when Southwest Airlines Flight 345 crashed into the runway at La Guardia in 2013. She was going to New York to finish her song “Crash Landing”. Also on the album. The range and quality of this new voice, makes the rest of the world sound dull.

"GOOD" is a contemporary classic that makes my hair stand on end, quickens the pulse, and awakens the ear. It’s got that deluxe, sumptuous cinematic breadth, which can bind a scene into memory with its song forever. And although, of the actual moment, it could do the same in a story of myth and historic distance. I play this song continually while painting, and know that it has already influenced my next book in its tone, splendour and force.

Brian Catling is a poet, sculptor, painter, and performance artist. The author of the Vorrh Trilogy, he makes installations and paints portraits of imagined cyclops in egg tempera. Catling has had solo shows at the Serpentine Gallery, London; the Arnolfini in Bristol, England; the Ludwig Museum in Aachen, Germany; Hordaland Kunstsenter in Bergen, Norway; Project Gallery in Leipzig, Germany; and the Museum of Modern Art in Oxford, England.