Elizabeth Gonzalez James' Playlist for Her Novel "Mona At Sea" 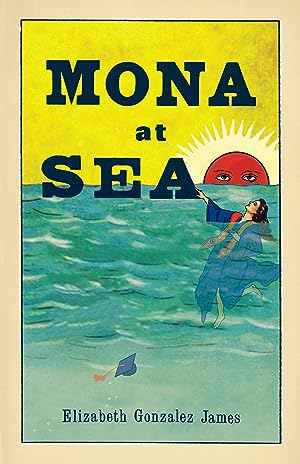 "Caustically funny and revealing... Fans of Stephanie Danler's Sweetbitter and Sally Rooney's novels will want to read this one."

In her words, here is Elizabeth Gonzalez James' Book Notes music playlist for her debut novel Mona At Sea:

Mona At Sea is a dark comedy about Mona Mireles, a young Latina overachiever going through a long period of unemployment during the Great Recession. I remember all the music I was listening to during 2008 and 2009, and it was a lot of fun, buoyant club songs about getting drunk, getting messy, and having fun. Rather than try to recreate the world Mona would have been living in with this playlist, I decided instead to choose songs that respond to moments in the text, or that capture a particular mood that exists in the story. I have super eclectic taste in music, and there was a moment when I actually considered doing the entire playlist using only Japanese City Pop from the 1980s. But alas, I think that particular connection exists only inside of my own head. So here are some songs that I think sort of work together to capture the mood of Mona at Sea. Imagine a washing machine filled with lots of different kinds of clothes. Individually they may look like they don’t belong together, but jumbled around inside the machine turning and sudsing, they make a coherent image.

An evergreen classic, I chose this song sort of literally and sort of tongue-in-cheek. At the beginning of the novel Mona has lost her dream job on Wall Street and finds herself broke, unemployed, and back at home with her parents. I think she would certainly call herself a loser, and so I feel comfortable calling her one, too.

House of the Glass Red, Pt I - Too Many Zooz

These guys are rad as hell. I have this dream that Mona at Sea will be turned into a movie and that we can get these guys to follow Mona around throughout the whole film, playing out her emotions in real time. This is my favorite song by them, and I think it perfectly captures Mona’s state of mind for most of the novel.

When I Grow Up - The Pussycat Dolls

This song is a lot of fun, and I think it really captures the years of about 2005-2009, which was the golden age of Paris, Lindsay, Britney, and all their tabloid exploits. I think a lot of kids grew up in those years thinking that fame at any cost was worth it, and this song really lays all of that out. This is also when cell phone cameras become ubiquitous, and viral videos, Girls Gone Wild, and the notion that literally anyone can be famous. It was a crazy and confusing time. Mona becomes an unwitting star in her own viral video, and she has to deal with the consequences of unwitting fame and notoriety. Spoiler alert: It sucks!

To those of us who grew up in heavily Spanish-speaking areas—South Texas for me, Tucson for Mona—Shakira was already super famous years before she made her English crossover debut. This is one of her early Spanish-language hits and a fantastic jam. There’s a scene late in the book where Mona remembers visiting cousins in Mexico and seeing Shakira on TV, and I like to think this was the song that was playing.

I worship at the altar of St. Vincent. She’s a Texan like me, she’s a badass, and I love pretty much every song she’s ever done. This is maybe my favorite song of hers. I chose it because it starts out nostalgic for bygone years of drinking and stealing cars, before anyone made any terrible mistakes, but then she hits you with this lyric:

That's just teenage talk
I don't think the past is better, better
Just cause it's cased in glass
Protecting us from our now and later

The past wasn’t better, and memory is fickle. Remembering things accurately is a big theme of Mona at Sea, as well as learning that the story we’ve told ourselves all along isn’t the story we have to hold to forever.

This is a cover of a Grizzly Bear song, but I prefer this version. Mona is a cutter, which we learn early on in the novel, and sharp objects play a large role in the novel. The refrain, “Can’t you feel the knife?” is repeated in the song, and I like the way this lyric is sort of ambiguous about which end of the knife is being felt: the handle (meaning the singer is asking the perpetrator, Can’t you feel that you are hurting me?) or the blade (meaning the singer is either putting the knife at someone else’s throat and asking them how much it hurts, or is crying out in pain themself). What if the singer is at both ends of the knife?

This is another very tongue-in-cheek song mocking someone who’s kind of up their own butt about how important and awesome they are. Karen O absolutely shreds the vocals in this, and one wonders if the song is itself a bit of performance art. Before choosing the more practical pursuit of finance, Mona used to be a very talented painter. I could see her singing this while perched on the thin edge between total belief in her own talent, and simultaneous belief in her utter incompetence and mediocrity.

I’m from Corpus Christi and Selena is basically our patron saint, so I had to throw a reference to her into the book. When she was a kid Mona came back from Mexico with a Selena t-shirt with gold lettering that already started to peel off a few days after getting back to Tucson. I remember when those t-shirts were everywhere just after Selena was murdered. I wonder how many people still have one in a drawer somewhere.

So Much to Say - Dave Matthews Band

In the second act of the novel Mona goes on a very bad date with an older man who insists on playing the same Dave Matthews Band song in the car while they drive. Mona has some very unkind things to say about DMB—I think she says they’re like if beer pong was a person. But I actually love Dave Matthews Band, and am always happy to listen to their early stuff.

Lopin’ Along Thru the Cosmos - Judee Sill

I discovered Judee Sill by reading once in Rolling Stone that MGMT (another of my favorite bands) really loves her. This is an utterly beautiful song, as all her songs are, and it contains this lyric that I think captures a lot of what happens when we’re young and trying to figure things out:

I'm lookin' so hard for a place to land,
I almost forgot how to fly

And then a few seconds later she hits us with this absolute gospel:

I'll tell you a secret
I've never revealed
However we are is O.K.

I want everyone to write that one down, inscribe it on your doorposts, and tattoo it on the inside of your eyeballs. However we are is OK.

Cry for everything bad that's ever happened - Le Tigre

Things get sad in my book towards the end of the second act, and this song feels like a purge, and maybe a dirge, just getting out all the tears. One big wide river. Because there is a frigging lot to cry about.

All at Sea - Jamie Cullum

This song actually gave the book its title. I was not acquainted with the phrase, at sea, until I heard this song. Cullum is happy to be at sea, describing a place where he can do what he wants, where he has no phone and no cares. But typically being at sea is a bad thing, a time of confusion and disorder, a state of being unmoored and adrift with no land in sight. Mona is certainly at sea for much of the novel, but eventually finds her way back to land. And it was necessary for her to be adrift. She had to see that she could drift and not die, and that she had the strength within her to turn her life around.

Anyone Else But You - The Moldy Peaches

I’m super cool (I’m not) and I knew The Moldy Peaches and this song long before it was featured in the movie, Juno. In the film, Juno and Paulie are imperfect weirdos who fall in love and sing this song as the movie closes. Without giving too much away, Mona finds her own imperfect weirdo and I think this song really captures the dynamic of their relationship. As Juno said, “He is the cheese to my macaroni.” I think Mona would agree.

Before becoming a writer, Elizabeth Gonzalez James was a waitress, a pollster, an Avon lady, and an opera singer. Her short story, "Cosmic Blues," was a finalist in Glimmer Train's Short Story Award for New Writers, and her stories and essays have received multiple Pushcart Prize and Best of the Net nominations. She's attended the Bread Loaf Writers' Conference, the Tin House Writers Workshop, and Lit Camp. She lives with her family in Oakland, California. You can find her on Twitter and Instagram: @unefemmejames