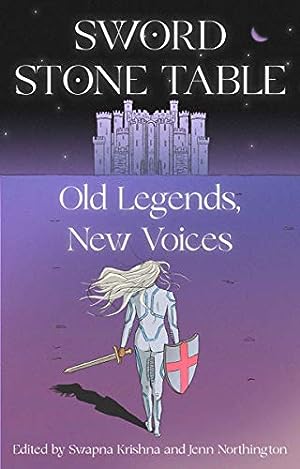 Sword Stone Table is one of the best fiction anthologies I have read in years, a diverse and surprising collection of Arthurian retellings.

"An anthology of breathtaking breadth, depth, and creativity. . . . There isn’t a bad story in the bunch, and the anthology offers such a variety of style, theme, and genre that die-hard Arthurian fans and more casual readers will be equally delighted. This is a must-read."

In their own words, here is Swapna Krishna's and Jenn Northington's Book Notes music playlist for their anthology Sword Stone Table:

Sword Stone Table is an anthology of inclusive Arthurian retellings, with stories from 16 contributors who take these well known, classic tales and characters and make them unexpected and new. It’s our first anthology, respectively and together, and it was both a labor of love and a huge undertaking. Any anthology has a ton of moving parts, and while collaborative by nature, the bulk of the work is done solo -- especially during a pandemic. So we approached this playlist the way we approached a great deal of the publishing process: divide and conquer! We each sat down and came up with our own shortlists, and then put them together. What we didn’t realize (but maybe should have) was how they would overlap in ways we did not expect! Below, you’ll find songs that spoke to our editing process, to our inspirations, and to the themes in the stories themselves.

Traces of You - Anoushka Shankar and Norah Jones

Anoushka Shankar is one of my favorite artists, and I listen to her music constantly. This song really resonated with me while we were reading and editing stories because it felt like a mirror of what we were trying to do -- honor the Arthur legend, but also renew it, finding the traces of what we know and love within these incredible new stories we’re seeing.

Stand for Myself - Yola

This is another song all about letting go and looking for new beginnings, about being lost and forging your own path -- which is what I feel like is the legacy King Arthur (and especially Mary Stewart’s Merlin trilogy) left me. These themes of not quite fitting in, of losing and finding yourself, of starting over will always remind me of these stories that I love (as well as myself as a teenager).

I’m always drawn to songs about dreamers, and this one is no exception -- and with this collection, we’re doing the opposite of what this song instructs. Instead of digging up the bones, but leaving the soul of the story intact, we’re extracting the soul and trying to deliver something fresh and new. The bones are there, if you want to look for them, but Sword Stone Table is about a new look at the soul of the Arthur legend.

This song, from the Hindi film Ram-Leela is basically the exact aesthetic I want from anything King Arthur these days, especially in television and movies. The song is just beautifully choreographed, with incredible colors and dancing, but there’s also an undercurrent of sadness and tragedy running through the musical notes that seems so appropriate to the fall of Camelot.

This is one of those songs I’ve been listening to my entire life. It took on new meaning when, in my teen years, I discovered that Solsbury Hill outside of Bath in the UK is the possible site of Badon Hill, which is a famous site in the story of King Arthur. To me, this song is irrevocably intertwined with my love of the legend now, especially as it’s a song about new beginnings and renewals.

I can’t hear Scarborough Fair without mentally turning back into my pre-teen self, obsessed with folklore and mythology and all the retellings of them that I could get from the library, which is really where the collection started. This Trafton cover in particular is exactly right for that previous me: moody, emo, wistful, a bit tentative, and deeply into it.

A large part of the work on this anthology happened in 2020, which meant that I was trying to balance a pandemic, social justice activism, a full-time job, friends and family (to the extent that such interactions were possible), and co-editing an anthology. So needless to say, energy was sometimes hard to come by. This song has been and still is a regular in my personal rotation, because it’s the best caffeine for my ears I’ve ever found. I can’t listen to it without feeling a huge lift, and I defy you to listen and not dance in your chair. (It also doesn’t hurt that it’s from a movie which executes one of the most interesting twists I’ve seen on a rom-com in ages, which makes it great inspiration for a retellings anthology!)

Once I’ve got some energy, then I need to focus and find my flow -- and Tijoux has flow coming out of her ears. While I love so many of her songs, 1977 is my favorite, both for the subject matter (I don’t speak fluent Spanish, so I know this part via translation) and for the insistent and persistent beat. She was a regular editing companion, and I’m grateful for her art.

I was introduced to Lizzie No’s work thanks to an amazing playlist from the equally amazing Anti-Racism Daily newsletter, highlighting folk songs by BIPOC artists, and “Narcissus” was one of my first thoughts for this playlist. It’s titled with a classical reference; it’s a fresh offering in a long-running genre; and the song is all about moving on and moving forward. The parallels are pretty obvious! “I’m a hero in some stories I could tell” -- sing it, Lizzie.

Another folk song! But the chorus on this one in particular could not be more perfect for this list, and every time I hear it I’m reminded of the alchemy that the writers in Sword Stone Table accomplished. Arthur disappears and then reappears, through our lives and through these stories, and if you give them your trust, you won’t regret the journey.

I realize this is extremely on the nose, but here we are. Going back to my teenage self for a moment, I was absolutely obsessed with this song. (I remember spending ages figuring out how to play it on my flute [band kid alert!] because it never occurred to me to try to find sheet music.) I then proceeded to forget about it for two decades, until Silvia Moreno-Garcia’s story came in, and it’s been stuck in my head ever since -- despite the fact that Moreno-Garcia’s Lady would eat Tennyson’s for breakfast. I invite you to join me; you’re welcome!

Don’t You (Forget About Me) - Simple Minds

This is the song that Arthur, Camelot, Nimue, and the rest would sing to me on the regular, if they were actual beings who could sing to me. I think about how each time I reread any version of Arthuriana, it means something different to me; as I grow and change, so do my troubles and doubts. Sometimes a retelling is so different as to be almost unrecognizable, but then it all clicks together. I will not forget about them! And I’m not sad about it.

Swapna Krishna is a space, technology, and pop culture writer and journalist. Her work has been published at Engadget, The Verge, Polygon, StarTrek.com, StarWars.com, The A.V. Club, and more. You can find her on Twitter at @skrishna.

Jenn Northington is a former bookseller and a current reviewer, podcaster, and editor with Riot New Media Group. She's a lifelong book nerd and can be found primarily on Instagram at @iamjennIRL.