Largehearted Boy: Andrei S. Markovits's Playlist for His Memoir "The Passport as Home"

Andrei S. Markovits's Playlist for His Memoir "The Passport as Home" 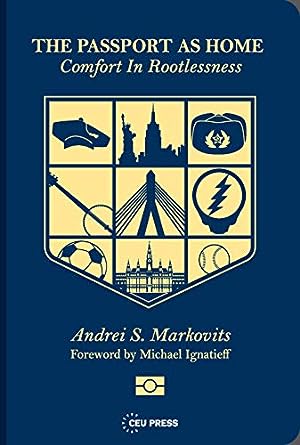 Andrei S. Markovits's memoir The Passport as Home is a fascinating look at immigration not once but twice, from Romania to Vienna and then from Vienna to New York.

In his own words, here is Andrei S. Markovits's Book Notes music playlist for his memoir The Passport as Home:

This is the story of a Romanian-born, Hungarian-speaking, Vienna-schooled, Columbia-educated and Harvard-formed middle-class Jewish professor of politics and other subjects who revels in a rootlessness that offers him comfort, succor, and the inspiration for his life’s work. In my quest to find a home, I describe the important political, social and cultural developments of five decades on two continents. My travels through post-1945 Europe and America offer a panoramic view of key currents that shaped the second half of the 20th century. I also engage the reader with my musical preferences, from classical to rock; my love of team sports such as soccer, baseball, basketball, and American football; and my devotion to dogs and their rescue. Above all, the book analyzes the travails of emigration that I experienced twice, moving from Romania to Vienna and then from Vienna to New York.

Azucena, the Roma heroine in Giuseppe Verdi’s great opera Il Trovatore, came to play a lasting role in my life. My parents took me to my home town Timişoara’s impressive State Theater. We saw all the usual suspects at this place: Carmen, La Boheme, La Traviata, Rigoletto, Madame Butterfly, and Il Trovatore.

In scene one of the second act of the last-named opera, Azucena (which means “Lily” in Spanish) tells her rapt audience of the horror that befell her when she witnessed the burning of her mother at the stake on the orders of Count di Luna. She does this in arguably one of the most moving arias for mezzo-sopranos, “Stride la vampa,” (“The Flames Are Roaring”). Then Azucena recounts that, in revenge, she wanted to throw the count’s baby into a nearby fire pit, but, amidst the commotion, picked up her own child and threw it instead. She then raised the count’s baby as her own child. At that point in the production, a huge flame emerged from the pyre beside Azucena, which so frightened me that my parents had to take me home after the act. Since then, each of the many times I have seen or listened to Il Trovatore, this scene has jolted me and given me the shivers.

Being upset that upon immigrating to the United States in the summer of 1960 my father decided to return to Vienna, I brightened my dreary days at my elite boys’ school with perfecting my American-accented English and gobbling up every morsel of American culture that I could find – from movies, to comics; from clothing to food. Nothing became a more powerful tool in my Americanization than music, especially that of The Kingston Trio all of whose albums I possess to this very day. It was via my love for the Trio that I taught myself to play guitar and banjo, to sing reasonably good harmonies, to encounter the world of Woody Guthrie followed by the magic of Bob Dylan. Among the Trio’s members, I fell in love with Dave Guard who sings lead vocals on “Fast Freight.” I came to learn many years later that Guard crossed paths in the San Francisco Bay Area of the 1950s with one Jerome Garcia who, as the lead guitarist of The Grateful Dead, would a few years later transform my life.

I could not believe hearing this song sometime in the 1990s, I think. Here was a song about the place where I had at least one meal a day – often all three – during my eight years as a student at Columbia University! It’s a wonderful song about Tom’s Restaurant on the northeast corner of Broadway and 112th Street made world famous by providing the exterior to Monk’s Café of Seinfeld lore! Suzanne Vega was a Barnard student about a decade after I was a Columbia undergraduate with my window in room 214 of Furnald Hall staring straight across Broadway at Barnard College.

“Satisfaction” and “Under My Thumb” by The Rolling Stones

In September 1965, the Rolling Stones finally made it to Vienna. I did not dare ask my father to allow me to go see this great band that – unlike the Beatles – he detested and feared for its rawness and not-so-hidden sexuality. So I concocted a story that the young man whom I was tutoring in English really needed my services that evening. To my delight and amazement, my father bought this lie so off I went to see the Stones with a friend. This was the very first rock concert in my life!

The Stones ended the concert with a rousing encore of “Satisfaction.” On my way home, I sang and bounced through the empty streets of nighttime Vienna. As I turned the corner toward our apartment building there was my father, barely three yards from me, having just locked his car on his way to the building. Without uttering one word, he smacked me! This was the only time that my father hit me in his life, never before, never after!

Seventeen years later a completely different scenario featured the Rolling Stones yet again in our lives. My father and I were in Spain in June and July 1982 attending the soccer World Cup. The Stones, so threatening to my father in 1965, assumed a completely different meaning for him in Madrid where he delighted in my academic success that I had attained by then. Just before the Stones took the stage in this huge soccer stadium, a massive downpour soaked the spectators and forced the Stones to wear see-thru ponchos as they commenced their fantastic concert with a driving version of “Under My Thumb.” My father was mesmerized!

As a young boy in Timisoara, I was constantly exposed to classical music. I came to love Antonin Dvořák’s compositions in particular. His “New World Symphony” was one of the items that my parents identified with America: a wonderful place that was to give us succor and safety in an ill-defined future. The symphony’s second movement – the Largo – became a staple of my soul. It was thus a special treat when as an undergraduate at Columbia in the late 1960s, the world-famous linguist Robert Austerlitz, took me to see the New York Philharmonic perform this symphony. On our way back to Columbia, Austerlitz began whistling and scat-singing lengthy melodic lines of the bassoons, oboes, clarinets, and cellos from the symphony, the Largo in particular. Heaven!

I always felt bad for Joseph Haydn. A brilliant and innovative composer in his own right, he had the misfortune to have Ludwig Van Beethoven and Wolfgang Amadeus Mozart as his contemporaries.

In September 1975, I attended a doctoral seminar on nationalism at Harvard University. The venerable Karl Deutsch was the professor. Without a single note in front of him, Deutsch proceeded to give a brilliant two-hour disquisition on nationalism. I had never seen a presentation so dazzling in scope and depth all delivered completely by heart. The class ran well over the allotted time. The students began leaving quietly because they had other commitments. The whole performance reminded me of Joseph Haydn’s famous Symphony No. 45—the so-called “Farewell” Symphony—where, in the final adagio, the musicians quietly leave their seats in the orchestra one by one, with only two remaining to finish the concert. The valiant two in this Harvard class were Deutsch and I. In the ensuing 15 years, Karl Deutsch became my mentor, patron, co-author but most of all, my dear friend who, with his family, changed my life.

“In My Life” by The Beatles

I cannot imagine my life without the Beatles! Like millions, particularly of my generation, I know virtually all the lyrics to all their songs. Their lyrics are just part of my daily life. They occur to me in the oddest of circumstances, sometimes with a clear a propos, sometimes completely without one. For obvious reasons, I found myself singing and humming their wonderful song “In My Life” on a daily basis as I was writing my memoir. Indeed, I end the book by quoting the lines “In My Life, I’ve Loved Them All” paying homage to the many folks who, as total strangers, affected my life deeply and beneficially even though I never got to know them, learn their names or make their acquaintance.

I devote an entire chapter of my book to the Dead. I call them my American Family! Indeed, in my profound rootlessness, nothing has anchored me more than a Dead show. There is no point in rhapsodizing about my love for this band and its music since this is a deeply subjective and personal thing of which any verbalization, no matter how eloquent, remains trivial. It most certainly would not come close to describing the meaning that this band has had for me since that fateful day in late September 1969 when I first saw it in concert at the Fillmore East in New York City. I saw well over 100 shows pretty much all over the East and West Coasts, even one in Essen, Germany! I love all the Dead’s many songs – their own compositions as well as sensational covers, particularly of Bob Dylan’s work – but I am particularly partial to the ballads featuring Jerry Garcia’s singing and soulful guitar playing that has often made me cry.

If I had to pick one among the many ballads, it would be “Loser” where Jerry sings the memorable lines “I can tell the Queen of Diamonds by the way she shines.” This always reminded me of another “shining” metaphor, this one by Paul Simon in his song “Graceland” in which he sings “The Mississippi Delta was shining like a national guitar.”