Largehearted Boy: Atticus Lish's Playlist for His Novel "The War for Gloria"

Atticus Lish's Playlist for His Novel "The War for Gloria" 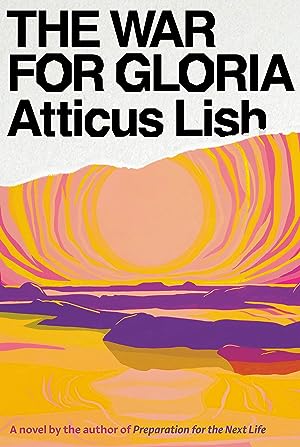 Empathetic and moving, Atticus Lish's The War for Gloria is one of the year's boldest novels.

"Unflinching and heartbreaking . . . Lish imbues the male characters’ varied pitches of toxic masculinity with great sadness, smoothing the edges off their macho posturing, and he writes with devastating empathy of Gloria’s highs and lows. This is a tremendous achievement."

In his own words, here is Atticus Lish's Book Notes music playlist for his novel The War for Gloria:

I offer the following soundtrack for my novel The War for Gloria.

As the story opens and we meet the two primary characters, Gloria and Corey, mother and son, living in a succession of apartments around Boston and even in her car, floating together in the stream of life like a single-celled organism, we hear “Destination Unknown” by Missing Persons: “Life is so strange…when you don’t know…how can you tell…where you’re going to…”.

There’s no song that can introduce the character of Leonard Agoglia, Corey’s father and the man who presides over Gloria’s destruction. A man without music, his entrance calls for “Four Minutes and Thirty-three Seconds” of silence by John Cage. Of course, in light of Leonard’s fetish for science, one also thinks of “She Blinded Me with Science” by Thomas Dolby.

When Gloria falls into an amorous embrace with Joan, we hear Asia’s “Heat of the Moment”: “I never meant to be so bad to you…one thing I swore I’d never do…” This lyric foreshadows how each woman will hurt the other. Neither will give herself fully, loyally and forever to their union. They are ambivalent and inwardly confused—but Joan especially is passionate.

Joan’s solo song, that is, the music that announces her and her alone, would be “Real Wild Child” by Joan Jett and the Blackhearts.

For the Hibbards—Tom the steady, solid construction worker and his daughter Molly—I hear a song by the immortal rock band Tesla, “Gettin’ Better”, which starts slow and melancholy, then banishes sorrow with a burst of positive chords on the guitar and a raucous yet tuneful cry from Jeff Keith’s lungs: “I’m a hardworkin’ man doin’ the best that I can!”

On the cusp of her diagnosis with ALS, Gloria feels an “electric strength”, a sensation of “new life” twitching in her muscles and nerves, which inspires her to write. For this, the magnificently energetic song “Coming Soon” by Queen should play.

Gloria’s actual diagnosis calls for “Emotion No. 13” by the Suicidal Tendencies.

To introduce Adrian Thomas Reinhardt, there will be no music at first, only the ambiguity of silence, but when he invites Corey to watch him hit the seventy-pound Everlast heavy bag that he hangs from his tree on the traffic island in Cambridge, Metallica’s thundering, pulsing, thrumming, rising, wave-breaking, crescendo-ing “Enter Sandman” must shatter our eardrums, for that is when we—and Corey—really begin to meet him.

The soundtrack for Corey’s extended friendship with Adrian, a montage of scenes, should be “Mama We’re All Crazy Now” performed by Quiet Riot.

Gloria is getting sicker. Her illness is real now. Death is coming, though not yet. Her life is going to be over. The things that could have been are lost. Memories pour through her. She can still feel the things she wanted. She drives to Jamaica Plain alone and goes to the Purple Cactus, an organic grocery, which means more than food to her. It represents her dream of reconciliation with the universe, a reprieve from her embattlement, a bower of leafy safety. She wanders the aisles and people pass her by like the wheel of life that she is leaving and we hear Berlin’s “Masquerade”:

“When you see the price they paid, I’m sure you’ll come and join the masquerade…The reeling figures pass on by like ghosts in some forgotten play beneath a black and empty sky. The music plays, the figures dance, partners chosen by chance, and still sometimes remember…the masquerade’s forever…”

In these eerie words, we hear the timeless whirl of natural life, the drama of mating, death and the reabsorption of the body into nature—the source of the magic food supplements and elixirs that Gloria handles wistfully in the store, knowing deep down that nothing can save her.

A good song to accompany our view of Corey sitting in his high school classroom checking out the girls would be “School Days”, the 1977 single by The Runaways.

Leonard Agoglia and Adrian Reinhardt meet in the basement at MIT. This coming together of two sociopaths is the equivalent of a radioactive rod clicking into a reactor core. Something atomic is about to happen. We hear “Last Days” by Onyx. Sticky Fingaz says: “South Suicide Queens…All [fellows]…Gather up all your own…Get ready for this new world order…Shit is about to change.”

When Corey plays hooky from his construction job to hang out with Dave Dunbar and friends—frenetically lifting weights in the basement, playing hockey in the living room, drinking by the train tracks, punching each other in the arms—the song for the occasion would be Metallica’s roaring, rousing, moving rendition of “Whiskey in the Jar”.

The state of mind Corey begins to adopt as a very angry young man can be dramatized by House of Pain’s 1993 single “Who’s the Man?”, especially these lyrics: “I got myself locked down in the pen. I ain’t got a friend. So here I go again. I gotta get my props up and earn my respect. Gotta shake someone up or throw him off the top deck. My time’s running out, I gotta spill some blood. If I don’t do it quick, shit, my name’ll be mud. So I pick out a hard rock and rush him in his cell. Beat his ass down and then say that he fell. And if I gotta do him, screw him, the convict’s dead. I’ll stab him in the chest just to let the rest of the cell block know that I’m nobody’s ho. My shank’s in my hand. So tell me who’s the man?”

Corey drives down the Mass Pike heading home to a showdown with his father. As he floors it going east staring out the window of his mother’s car, we will listen to Onyx’s echoing, doom-cry: “Bacdafucup”.

After the showdown, as he rends his father’s clothes to shreds, we listen to Waylon Jennings singing “The Devil’s Right Hand.”

In the moment Joan embraces Corey, our soundtrack must play Nancy Sinatra’s dizzying, swelling “Bossman”: “Any way you can…just take my hand…big boss man...”, which was deployed to devastating effect in The Sopranos.

In the spring and summer as Corey goes to work at construction jobs first in South Boston and then, through Tom’s intervention, on a big union high rise project in the North End, we shall hear REO Speedwagon’s “Roll with the Changes.”

When Corey reaches his hand out to Molly, touching her hip in her father’s kitchen, the right song is “Stone in Love” by Journey.

There is no music for Gloria’s deterioration that fall. The household enters a sleepless, bleary “night world.”

Gloria in her final coma: Memories flood the theater of her mind. She bids life goodbye. The music for this section, which concludes with her funeral, should be Tesla’s “Little Suzi” with its improbable lyrics, “Little Suzi’s on the up…”. What is it to be “on the up”? But it’s the right phrase. We may think of her spirit going up to heaven.

I hear nothing for the bad things that happen next. I will leave it to the reader to supply his or her own score.

When Corey reconstitutes himself and begins running on the beach, training to make the Navy SEALs, the proper soundtrack is “Freedom Fighter” off the hard-rocking Fire and Gasoline album by former Sex Pistol Steve Jones.

At the end, but before he ships out, when Corey meets and falls in love with the brown-haired girl, we learn that she has her own ambition to escape from Massachusetts and carve her mark in the world. On the stereo system of her parents’ Honda Odyssey, she plays for him “The Queens of Noise” by the Runaways, and we should hear it too.

The last memorial scene, when the flowers go in the water, calls for “Guantanamera” by the Sandpipers.

Thus the war for Gloria ends—and goes on forever, generation after generation.

Atticus Lish is the author of Preparation for the Next Life, which won the 2015 Pen/Faulkner Award for Fiction and the 2016 Grand Prix de Littérature Américaine.