Largehearted Boy: Blake Sanz's Playlist for His Story Collection "The Boundaries of Their Dwelling" 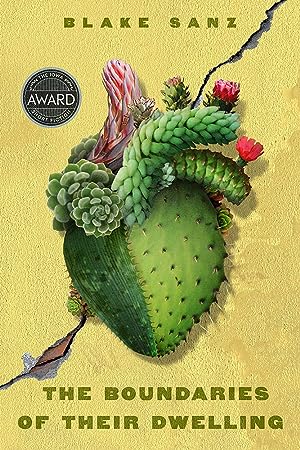 Awarded the Iowa Short Fiction Award, Blake Sanz's collection The Boundaries of Their Dwelling bustles with life and constantly surprises.

Brandon Taylor wrote of the book:

"The stories in Blake Sanz’s The Boundaries of Their Dwelling pivot on acute moments as the hilarious gives way to the painful, the painful to the beautiful, and the beautiful to the truth. The characters in these stories are not lifelike so much as they are alive, rendered warm-blooded and human by Sanz’s pitch-perfect details and lucid prose. Here is a collection of dreamers young and old, all in search of home, family, love, a place where they can be fully themselves. It’s a riotous collection of stories that together capture the tumult of what it means to be alive."

In his own words, here is Blake Sanz's Book Notes music playlist for his story collection The Boundaries of Their Dwelling:

The stories in The Boundaries of Their Dwelling take place in the Gulf South (most notably New Orleans) and Mexico (most notably Veracruz), and so this list is filled with songs associated with those areas. Since the stories are about characters who don’t quite know how they fit in the places they end up, I’ve picked songs that speak to things that might cause people to feel uncertain about their circumstances—songs about flooding in Louisiana, or government oppression in Mexico, songs whose sound is so definitive of a region that they feel like home to a native, but maybe are off-putting to someone who doesn’t feel like they belong. Hopefully, in that way, this music captures something true about the story collection.

Water has always plagued Louisiana. “Hurricane Gothic” is a story about a carpenter who lives through forty years of flooding in rural Louisiana, rebuilding his house each time a river overflows or a hurricane’s storm surge passes through. Newman’s dirge about the Mississippi River flood of 1927 captures the emotions of many people from that region in such moments, from their sense of despair and stoic focus on the facts of some particular devastation, to their distrust of federal promises for help.

This song is rough, angry, raw. In my story, “Mysteries of the 19th Olympiad,” an art student in Mexico City in 1968 joins the protests there before the Olympics begin, when the government rained gunfire down on a crowd and many innocents were killed. Performed by a Mexican punk band named after that very event, “No Estamos Conformes”—“we aren’t compliant”—is as angry and frustrated as those protestors in the summer of ‘68.

At certain dance halls in Acadiana, to utter the name of Clifton Chenier is to evoke a reverence and exuberance usually reserved for the Greek gods of Mardi Gras. The King of Zydeco, Chenier still gets played in Lafayette like it’s 1973. “In the City of Murals,” a story about a Mexican immigrant artist surviving by airbrushing T-shirts in a small Cajun town, features Chenier playing at a local festival where Manuel plans to sell his wares.

Technically, Janis Joplin is from east Texas, but since the main character of “Frog Festival,” like Joplin, is nicknamed Pearl (also the title of one of Joplin’s studio albums) and lives in a small Louisiana town just a couple hours east of Joplin’s hometown and she’s searching for her husband who’s left amid financial failure, “A Woman Left Lonely” feels like a perfect anthem for her story.

In “¡Hablamos!” two teenage girlfriends from Mexico City win a chance to play roles on a Spanish-language reality show filmed in Miami, and the trip becomes their first experience of the U.S. The wild friend listens to Ricky Martin, the quiet one to Ozomatli. The original version of the story included these lyrics from this song, cut in this collection for copyright reasons: “aquí no existe tristeza; solo existe la alegría.” Here there is no sadness, only happiness.

It doesn’t get more New Orleans than Irma Thomas. Her voice defines soul in that city, and the longing in her voice here matches the mood of the protagonist in “The Laurel Wreath,” a bartender and New Orleans lifer who creates a shrine to his dead mother by turning her old house into a bar. It’s the most New Orleans story in the book, and at a heightened scene where he’s pulled over for a DUI, our man idles in his car as this song plays on the radio.

Amanda Palmer is a kindred spirit with the title character of “Mary Vásquez Teaches Burlesque,” a Dallas Chicana who secretly gives burlesque lessons in the rec room of a Catholic rectory. Mary’s a trickster and an old soul, and when she performs in dive bars in Deep Ellum, I imagine it being sometimes to a song like this.

The German-born engineer in “Oh, But to Be a Hearse!” is adjusting to life in New Orleans. He gets that things are different and he’s intrigued, but he’s not sure if he wants to participate. When I wanted him to face either being drawn into the city’s counter-culture or rejecting it, I pictured him deciding to go to a now-defunct bar on Saint Claude, The Spellcaster Lounge, to see Quintron playing songs like this one while Miss Pussycat, Quintron’s partner, puts on a puppet show. My favorite line from this raucous tune: “I sold my soul to the big gumbo.” Which is what this character contemplates doing.

“Die, Die My Darling,” The Misfits

The Misfits are big in Mexico, which is maybe not a surprise if you consider that country’s intimate relationship with death and horror. In “Godfather,” a young Chiapaneca and her newborn are riding north through Veracruz toward Texas with an American oil executive. As the teen mother sits in the passenger seat, she sees that he has Walk Among Us in his console and asks him to play this song. Her interest in it, and her knowledge of the English lyrics, become a mystery he wishes he could unravel.

In the U.S., we know “La Bamba” as that Richie Valens hit from 1958, but the song’s much older than that. It comes from an old Veracruzano musical tradition called son jarocho. There’s a reference to son jarocho in “Cazones, 2016,” when an American son and his estranged Mexican father set out on a trip to the coast of Veracruz in search of an ex-military man rumored to have been part of the massacre in 1968. When they find this guy, he tells a harrowing story about the Cuban revolution and playing son jarocho for revolutionaries. For the father, who grew up in Veracruz, the musical reference evokes his own youth. For the son, who grew up in Louisiana, the reference means nothing, and so he’s left out of that moment of connection.

Blake Sanz is the author of The Boundaries of Their Dwelling (October 15, 2021; University of Iowa Press), which won the Iowa Short Fiction Award. He has published fiction in Ecotone, Puerto del Sol, Fifth Wednesday Journal, and elsewhere. A native of Louisiana, he now lives in Denver, Colorado and teaches writing at the University of Denver. You can visit him at blakesanz.com.