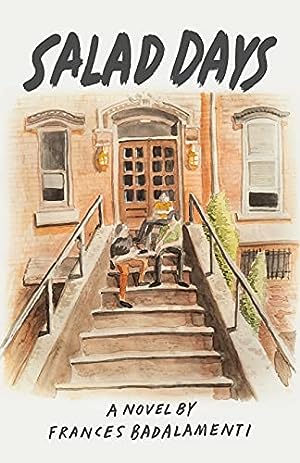 Chloe Caldwell wrote of the book:

"Salad Days is about those gravy days when stakes are high, choices are fraught, and your friends are your world. Place is the main character in this book, the 90s indie music scene is a backdrop, and the prose will remind you of your own conflicted and spectacular salad days."

In her own words, here is Frances Badalamenti's Book Notes music playlist for her novel Salad Days:

Archers of Loaf – Web in Front

This particular song was a big inspiration for Salad Days. I kept writing this one scene over and over. It had started as a vignette and then it eventually made it’s way into a short story. In the end, that scene truly inspired me to write a full novel depicting this specific time in my life. When I was in my twenties, I had been a bartender at an indie music venue in Hoboken, N.J. called Maxwell’s. Anyhow, Archers of Loaf played one night, was in the early to mid 90s and I was working the back bar where the bands play. I wasn’t familiar with them at all, but it was crowded as fuck, like hot and sticky and there was just this sea of bodies. When Archer’s came on with “Web in Front”, the energy coming off of the crowd was just so frenetic. I just stood there with a bar rag in my hand and felt that I was a part of something bigger than just bartending the back bar of a music venue. I had been to a lot of shows and had worked a lot of shows, but this one moment and that one song has stayed with me ever since.

This is Ana, the book’s protagonist’s favorite song. R.E.M. is her favorite band. When she gets buzzed and feels emotional, she listens to this song, singing along and weeping. I listened to “Country Feedback” a lot while writing Salad Days, so the vibe of that song definitely informs the narrative. It’s such a raw and vulnerable dirge and it really brings me back to being a young person trying to make sense of the adult world, which is Ana’s trajectory in my book.

When Blood Sugar Sex Magik came out in ‘91, Ana was taking classes at a commuter college in Jersey, not far from Manhattan. This is what she plays while driving up and down the highways of Jersey, maybe stopping off for a Dunkin’ Donuts coffee and definitely smoking a Camel Light out the window. This is when things felt way more free and light. She was still living at home at her mom’s, working at a strip mall Bennigans, planning on moving out soon. There was so much hope on the horizon.

Check Your Head came out in ’92. That album to me (and of course for Ana too) truly epitomizes early '90s Jersey. And I feel like “Gratitude” is one of the Beastie’s best songs, hands down. It’s got those sweet, groovy Money Mark vibes.

This is what Ana listens to late at night in her room when she’s sad and pining for her phantom lover. And this is the music she turns back to with nostalgia when it’s pissing rain in Portland and is so far away from everything and everyone she ever knew. On a personal note, I saw PJ Harvey play one night in Manhattan, mid-'90s. It was one of the smaller clubs -- I think it was The Academy. Killer show for sure! Anyhow, I saw the director Hal Hartley and the actor Martin Donovan walk in and I nearly lost my fucking mind. I was super into Hal Hartley films at the time, especially “Trust”, which starred Martin Donovan and was so early '90s in it’s style and vibe. I just freaked out on my poor friend Mike (Mark character in the book), like pounding on his chest and he was like, Will you please calm the down, you’re embarrassing yourself! It’s such a funny, vivid memory of being young and dumb and making an ass of yourself.

I have a strong memory connected to this song that relates back to my character, Ana, in a sense that Ana wouldn’t exist if it weren’t for me. That sounds kind of funny, but a lot of me is in Ana even though so much about her has been fictionalized. Anyhow, one night I was hanging out in my room in Jersey City (fictionalized into Milltown in the novel) with my friend Chris. I had two guy best friends named Chris at the time. And Ana ends up being close with a guy friend, too, his name is Mark in the book and Mark is pretty much an amalgam of Ana’s close guy friends and represents how close she could be to guys and in a not sexual way. So my buddy Chris and I were pretty drunk and stoned and we’re listening to Bjork’s Homogenic CD and “Joga” comes on and we are crazy about that song so we start interpretive style dancing and really just feeling the music in a deep, deep way, writhing around on the floor and just bugging out. We had the lights off and just a candle burning and with all of our wildness, the candle fell off of a bookshelf onto a pile of CDs. We were like, Oh Fuck! And then we started laughing and bugging out in a different way and then there was all this wax on a bunch of my CD covers for years and every time I saw the wax, I thought of Chris and that epic, joyful night in my room listening to the beautiful Bjork song “Joga”.

Ana is a true Jersey girl at heart even though she would never admit it. She definitely has a love-hate relationship with her home state, but when she finally leaves Jersey to move out west to Portland, she misses the shit out of it more than anything. As much as she is surrounded by super cool shit, working at an indie music venue, hanging out with cool, eccentric people, seeing arthouse films in Manhattan, then eventually working at trendy design studios in Portland – her taste in music is actually not so obscure. This is one of those songs that she plays in Portland while feeling nostalgic for Jersey and for her people in Jersey.

One of the themes in Salad Days is '90s-era independent music. When Ana worked at the indie music venue, Milltown Tavern, Built to Spill was one of the bands that played there and this is the music that really seemed to epitomize the independent music of that era. Shoe-gazing indie rock. Guys wearing tight-fitting plaid button down shirts, faded cords and black-rimmed glasses. Girls in dresses with jeans and sneakers. Messy hair. Beer and cigarettes. Late night hookups on second hand futons. College loan debt. Broke until payday. And all of that gritty music.

When I think of independent music of the '90s, of course I think of Pavement. I have actually been in many yoga classes with Steve Malkmus in Portland.

Sonic Youth is yet another quintessential '90s indie music band. There is a connection between Sonic Youth and Maxwell’s, the club that Milltown Tavern was based on in my book. As I understand it, Steve Shelley, who was Sonic Youth’s drummer, had some stake in the ownership of the club. And so did Peter Buck from R.E.M.

Sebadoh – Not Too Amused

And clearly so is Sebadoh. I love Lou Barlow’s voice. All these indie dudes have such great voices, so distinct, deep and heartfelt.

And of course so is Dinosaur Jr. I love a good cover song. I love J. Mascis’ voice so much. I love The Cure. I don’t love this particular Cure song, but I love how J. performs it. J. also does a cover of Mazzy Starr’s “Fade Into You” which is also super rad. I once heard J. tell Marc Maron on his podcast that he performs Kirtan, which is a call and response style of chanting and singing within spiritual and yogic traditions. I also enjoy singing Kirtan and would love the opportunity to sing Kirtan with J. Mascis some time.

The Sea and Cake – Parasol

Before they moved out west, Ana and her husband Paul saw The Sea and Cake together a few times. She will always think of Paul when she listens to this song. This was pretty much their song. It’s truly a gorgeous song. I also have a huge crush on Sam Prekop.

The last show that Ana saw at Milltown Tavern before she moved out west was Bonnie Prince Billy.

The Shins – Caring is Creepy

After Y2K, Ana leaves all of her people in Jersey and absconds to Portland, Oregon with her new husband, Paul. Times are changing. This is her transition from sloppy-and-naïve-young-adult to trying-super-hard-to-be-a-real-adult. Her salad days are over. The '90s are over. She’s living on a new coastline and things with Paul are falling apart. Weed and wine are her new best friends. The darkness and the rain are relentless. And it’s always the music that she turns to when she can’t find her way. But then something shifts and opens up and maybe things are actually going to be okay. This song represents that time, that feeling, early 2000’s Portland.

Frances Badalamenti was raised in Queens, New York and suburban New Jersey, but she now lives in Portland, Oregon with her husband and son. Her work can be found at The Believer Magazine, BOMB Magazine, Longreads, Vol.1 Brooklyn and elsewhere. She is the author of the novels, I Don’t Blame You and Salad Days.