Largehearted Boy: Sarah Kornfeld's Playlist for Her Book "The True"

Sarah Kornfeld's Playlist for Her Book "The True" 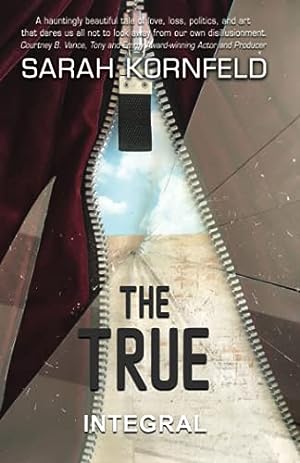 Sarah Kornfeld's book The True is a fascinating trail of where grief can lead us.

Steven Scott-Bottoms wrote of the book:

"The True is a compelling, troubling, and painfully honest story about the world we live in now—a world of fake news and alternative facts in which we believe what we want to believe and ignore or deny those nagging voices that tell us otherwise. The True lures the reader in with its dark poetry, and then refuses to let us go."

In her own words, here is Sarah Kornfeld's Book Notes music playlist for her book The True:

I wrote The True in a mad fever dream after discovering that I had been caught in a scam of the heart, a complex con that ate two years of my life. Writing the book, I turned to music to, and even though I had been caught in a web, I went to the web, to social media, where I engaged artists I loved, drawing from their strength and honesty in order to write a narrative non-fiction book echoing our contemporary tempo.

Among other things, The True is about renowned Romanian theater director Alexandru Ducu Darie and about a deranged woman who convinced me there had been a conspiracy behind Ducu’s death. Ducu and I were lovers in the early 1990s and stayed very close after breaking up. Following his death, I traveled to Bucharest twice to try to find out what killed him. Listening to music held me together. I think that being caught in an elaborate scam to hide any truth resulted in me longing to watch live performances; these performances embody the rage I felt, the longing, and, most importantly, the rebellion of truth-telling.

Here is my music playlist for The True:

Patti Smith has always been my saint. The first time I heard the lyrics “Jesus died for somebody’s sins but not mine,” I thought it was the coolest, most Jewish thing ever. Smith’s not Jewish, but to say these words aloud gave me a sense of strength and place I don’t think I’ve recovered from. I grew up in the avant-garde theater of Greenwich Village, and Patti was around because she was with Sam Shepard. I wish I could recall what Smith was like back in 1979, when I saw her hanging out at cafés and performing. Writing my book, I played this live performance and remembered living with Ducu in an apartment facing the back of the Chelsea Hotel. How brave Smith was then, and remains. She shows up a few times in the book.

In 2018, I sent this video to Ducu who was directing a sixty-person, modern version (set in modern Iraq) of Shakespeare’s Coriolanus. This video, with a young Eddie Vedder, is a gorgeous time-capsule of some of the energy of the early 1990s— the hair, the mosh pit, the yawp to the world that we are actually alive—all of it, brought me back to when I was younger and in love, and very angry. Floored by this performance, Ducu captured some of its vitality by staging the play’s crowds like a mosh pit. I wish he’d used the audio of the performance in the production because really, it’s epic.

3. “Stormy Weather/If You Believe, by Lena Horne: Live On Broadway

I remember my father coming home one night with tears in his eyes, saying he’d seen the best performance ever: Lena Horne. He saw her perform three times, taking me along once where we sat in the front-row. I still remember Horne’s sweat rolling down her chest, the elegant fabric of her dress sticking to her, how she embodied her life story. This reinterpretation of “Stormy Weather” cuts to the core of loss, forces you down the well that is grief. “If You Believe” follows it and kicks your ass out of any form of sadness and self-negation. In other words, Horne demands you wise up and keep going.

When Ducu died in 2019, I could not feel. I could only search the internet for answers. And then I found this amazing performance by Ladisi, and I played it over and over. This is the only song that helped me cry, and I played it while writing a good portion of the end of the book. Iggy Pop’s performance of this classic Brel tune is great, but it’s Ladisi who gets at the stupid hopelessness and the ways we hold on even when love is dead.

During the scam (not knowing it was a scam), I wrote a screenplay for Diana Ross. The pandemic was at its height and I had nothing but memory and imagination. I wrote a script about a mother and daughter, a hidden secret, and a violent coup in the United States that Diana (all decked out in black) fights on the streets. I heard this song in my head. I heard Lotte Lenya, her craggy, weird, and elegant phrasing, and I wrote and wrote and wrote. Sometimes a performance is timeless because of its style; that’s the case with this one, though buried deep, Lenya also sounds like she is being forced to reconcile to the truth. Age gets you in the end.

Discovering I was caught in a scam, I listened to jazz, exclusively. I also thought a great deal about how Davis fled the U. S. for Europe, and how artists still or at least often have to split this scene for one that’s free from our history. Dissonance and counterpoint are vital frameworks for responding to our country’s many ills, including its racism. As nationalism rears its ugly head, I turn to Davis over and over again to see what great bravery looks like: blowing your horn and listening at a level most can’t dream of, and finally, telling it like it is, one note at a time.

Sarah Kornfeld is the author of The True: A Trilogy of Ghosts, What Stella Sees, and The Lovedeath of Clowns. She is the founder of Rising Media, a research and consulting company serving the ecosystem of the creative economy (museums, policymakers, guilds, and cultural institutions). Graduate of Sarah Lawrence College, she lives by the sea in the Bay Area of California.