Largehearted Boy: Tatjana Soli's Playlist for Her Novel "The Removes"

Tatjana Soli's Playlist for Her Novel "The Removes" 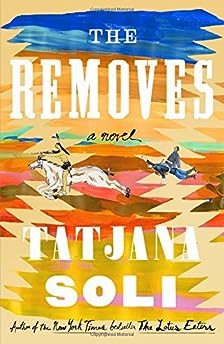 Tatjana Soli's novel The Removes is an epic exploration of the brutal American West told through the lives of two women.

"An epic, enthralling look at the American West in the mid-1800s, told through the eyes of General George Armstrong Custer, his wife Libbie, and Anne Cummins, a 15-year-old girl abducted by the Cheyenne in Kansas . . . With visceral, vibrant language, Soli paints a stark portrait of the violence, hardship, and struggles that characterized the American West."

In her own words, here is Tatjana Soli's Book Notes music playlist for her novel The Removes:

One of the challenges in writing a book set in a different time period is to make the characters feel as alive as in a contemporary novel while still making the reader aware that they are living in a different world, occupying a different head space. While there are universals in human emotion, there are also differences of attitude and belief. A soundtrack is a constant reminder to the reader/viewer that he is immersed in a different world. My novel, The Removes, is set during the period of the American Frontier, 1860s through 1870s, and as I wrote I looked up music that I found mentioned in my research but also looked for things that evoked for me a mood for particular scenes in the book. Some are historically accurate; others are anachronisms that nonetheless inspired. In this way sound functions as one more tool for a sensory type of research.

“Garryowen”
An Irish drinking song that became a regimental marching song, used most infamously by the 7th Cavalry under Custer. I found it such an incongruous idea to bring a band out to the wilderness to engender espirit de corps in the soldiers going to battle. I imagine it sounding loud and inspiring during the Civil War, and becoming tentative out in the great empty spaces of the West.

“Thunder Storm”
I loved this when I came across it. It embodies a feeling of loneliness and being faraway. I picture being in a tent, stranded, hundreds of miles from the nearest human habitation. Drinking was a scourge on the Frontier as soldiers were forced in on themselves.

“Native Flute Symphony”
This comes directly after the last piece. Imagine this great isolation and quiet — how much more attuned one would become to nature, to the playing of a single instrument. This piece seems to me the beginning of moving into a different mode of being. My character Anne feels this as she slowly comes to know the tribe that has captured her. There is one scene where they hide from soldiers in a stone fortress — it becomes a moment where Anne feels a part of the nature around her.

“Devil’s Dream”
This type of music was played in camp for entertainment at night as pure escape. It probably made them doubly homesick and nostalgic when the song was over.

“The Lark Ascending”
An English Pastoral written on the eve of WWI, and yet to me it speaks of American open spaces. I love listening to it while driving through the burnt gold hills of the Central Coast in California, but I can equally picture the wide-open spaces of the Dakotas or Montana. Part of the mystique of the Western is the freedom of the land. Vaughan Williams wrote the music as an escape from the darkness that he felt gathering in Europe. I think it works equally well for the period of the Indian wars in our country.

“Swallow Tail Jig”
This piece has a propulsive rhythm. I see this as the soundtrack of men hurrying to battle. It was written during the great migration of the Irish to the United States, and it reminds me that the soldiers were recent citizens to our country. An interesting fact to remember at this time in our history.

“The Girl I Left Behind Me”
Another popular military regiment tune used from the time of the Civil War. I would think it would make soldiers even more nostalgic of the things they were separated from.

“Amazing Grace Solo”
I love this version because it sounds so ethereal and haunting. It reminds me that these people endured such hardship and many had nothing more than faith to reinforce them. I imagine the forlornness of hearing this played as they buried a soldier, knowing that as soon as they rode away, the gravesite would in all probability be lost.

“In a Sacred Manner Come”
I experienced Native American drumming in New Mexico. The pounding is a physical sensation as much as an aural one. Very powerful. Imagine attending a formal ceremony as one totally unfamiliar with the culture and being mesmerized by the plaintive chanting. My character Anne, taken captive, has feelings of fear, disorientation, and ultimately fascination with the tribe she lived with.

“German Waltz”
I end with this tune because it immediately brings a smile to my face. There’s a wonderful clip on the internet showing Isabelle Huppert and Kris Kristofferson waltzing to it in the movie Heaven’s Gate. To confront the lack of social interaction, Libbie and Custer regularly arranged dances at the forts where they were assigned. I can see them whirling around the floor to this music, enthralled by each other.

Tatjana Soli and The Removes links: