Karen Osborn's Playlist for Her Novel "The Music Book" 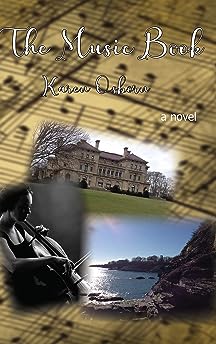 Karen Osborn's The Music Book is a captivating novel about music and the musicians who make it.

"Osborn writes with incredible polish and subtlety...The result is a meditation on art, aspiration, jealously, and selfishness, all placed against the backdrop of gender and shifting trends in the mid-20th-century classical music scene...A gripping, precisely composed tale about music and those who give their lives to it"

In her own words, here is Karen Osborn's Book Notes music playlist for her novel The Music Book:

The Music Book is both the story of a woman who bears the consequences of a failed relationship and the story of a musician whose deeper lived-experience arises from the music she plays and listens to all her life. I believe we simultaneously live multiple lives within the different layers of ourselves. On the outer layers of life, there might be struggle, loss, longing, and even chaos, but underneath all that, in the deepest layer, lies the real story, the true story. Music and the arts can connect us to our most profound selves, where beauty lies.

In The Music Book, a woman’s life is seen as a single moment. Both music and literature have the ability to expand or compress time. They can also make us feel our own timeless nature. I love and listen to all types of music, including classical music, the blues, rock and roll, gospel and country. This playlist includes classical pieces that Irena Siesle, the cellist in my novel, performs and listens to, as well as other music played or written by women.

In 1953, when the cellist Irena Siesle is hired to play with the Modern Strings at a four night classical music festival held in Newport, Rhode Island, she meets and falls in love with the composer Arthur Cohen, founder of The Modern Strings. At the first night’s concert, she listens to a piece by Bach.

When the musicians struck the first notes, they were perfectly clear, and a well-ordered Baroque world rose up like the tall fluted columns that lined the room and the evenly spaced archways with gold trim around the ceiling. Her ear picked up the brightness of the flute against the strings, the lower register of the cello in the background. Five instruments were conversing and the second movement arrived without surprises, like a well-planned garden planted on purpose for variations in color. She understood such musical phrasing built on repetition and variations. It was a balm. Every muscle let go, her heart rate slowed. Language slipped, but not the ear, not the heart. It went on listening. The first time she’d heard a cello it had been playing Bach. “What is that instrument?” she’d whispered, pulling on her father’s jacket, falling in love with the cello’s sound in an instant, like a stone falling through water.

The second night of the festival, Irena hears a quartet play Beethoven. This scene occurs right after the concert. You can hear the excitement of sexual attraction in Beethoven’s adagio.

She walked past everyone else, toward the back of the lawn near the ocean. White flowers shone in the torchlight and Charles caught up with her. He handed her a flashlight when she said she was staying behind to walk with Arthur and then went on ahead. She continued walking alone past the torches and through the thick grass until she reached the cliff path. She made out the row of hedges at the back and the hulking shapes of rocks. She smelled salt water and a hint of gardenias and heard laughter, farther away now. Arthur was possibly back there still, near the mansion where a crowd still gathered. Maybe he won’t come, she thought switching on the flashlight, and then she saw his shape walking toward her.

“Yes,” she answered and the air felt suddenly alive, trembling as she turned toward the path. Rocks came into sharp relief under the flashlight. She walked ahead of him, swinging it, unable to keep it steady.

The third night of the festival at a concert featuring Brahms, this experience transforms her.

The musicians were playing the finale when she found herself listening intently. She heard the sounds coming from the instruments as if she was approaching something unknown but enormous at the center of Brahms or maybe at the center of all music. As soon as she focused on it and tried to follow it, the sensation disappeared. She had no word for it—the thing that mattered inside the music being played and all those ideas about music and the hours spent learning notes and perfecting techniques. Inside this and inside her desire to have Arthur turn and look at her when he passed back through the hall after the concert was over, was something bigger, a presence there in the notes. She slipped down, feeling nearly asleep but not asleep, hearing more and more and deeper and deeper, and then there it was suddenly in front of her—beauty. There was no other word for it. Beauty—the reason for the performance, for all this, including an enormous mansion built on the sand and the hundred or more people in the audience. It was the reason also for Arthur and her meeting and for her performance tomorrow evening with The Modern Strings. Beauty, which it turned out was so great a sensation it overwhelmed everything else, including arguments and politics about which music was better, the old or the new, and including even the future and what would end up happening. Beauty was so great a sensation, she could barely perceive it.

When the cellist Kate Kayaian read The Music Book, the modern music that Arthur Cohen composes made her think of this sonata by the composer George Crumb. This paragraph is taken from the scene where Irena performs Arthur’s music with The Modern Strings.

The final difficult passage of the last lines followed. All four instruments entered at once and the sudden dissonance was sobering. It brought her back down to earth, but mystery lingered, brilliance flickered. There was a purpose behind everything and music made you know that, made it possible to feel the authority of that purpose. Life wasn’t orchestrating music. Instead, music was orchestrating life.

The cellist Jacqueline de Pre became well known beginning in the '60s, when it was still very difficult for women to play professionally. During her brief career, cut tragically short by multiple sclerosis, she performed all over the world. This next passage is from the ending of the novel, showing Irena’s final concert at her life’s end.

The musicians were beginning to tune and she found her place, as if she’d never left but had stayed at the top where the concert was taking place. She tuned herself, strummed each string. The air was dry and airless and the hilltop was like a giant sheet. She fell into it. All around her now the music was beginning. Sound would last. Beauty would last. She unwound the last bit, saw herself briefly in a train window. The image flashed then went out. She took the music out of herself. She removed the notes and the coda and touched the bow to her strings. There was no conductor. He was not needed. The sounds came from her as if she’d played this piece all her life. She had played it. It had played her. The strings stretched all through her and she took off her skin and flesh and muscles and bones. She was the strings and they were her. She saw the mind did not matter. She poured out its contents.

This was the pinnacle. She’d climbed the long ways and was herself music. She released the bow. She released even her wooden body.
Play, someone instructed.

She played beauty and beauty played her.

Linda Osborn, my sister and the pianist on this recording, has fed my passion for music for many years. She performs regularly in Boston with individual singers and with several groups, including the Boston Modern Orchestra Project. The words in Virgil Thomson’s song are from the poem, “Down at the Docks” by Kenneth Koch.

I’ve loved this song by John Prine for as long as I can remember, and Bonnie Raitt’s voice, combined with John Prine’s, has the ability to twist the notes so that they slide right into your heart. Until recently, women musicians struggled to make their voices and instruments heard. Before the 1970’s women weren’t even allowed to audition for most professional performance opportunities, and when major orchestras were told they had to audition women, they often hung a thin curtain between the musician and hiring committee so they could see the shape of the musician’s body, or asked the musician to speak so they could hear her voice. Not many women were auditioned, and even fewer were hired.

When I was studying poetry with Miller Williams in the M.F.A. program in Fayetteville, Arkansas, I frequently heard Lucinda Williams perform. This song captures that feeling when a certain something keeps pulling you back into a relationship, even though you know it’s over. The rawness of Lucinda Williams’ voice will make you feel that loop of longing and regret.

“(You Make Me Feel Like) A Natural Woman,” Aretha Franklin

Aretha Franklin’s powerful voice, that resonates with the depth of gospel music, will bring you to your knees when you hear her rendition of Carole King’s famous song, celebrating love and all that is female. Also, watch this youtube of her singing it at the Kennedy Center in 2015.

If you haven’t seen 20 Feet from Stardom, a documentary about backup singers, who were mostly African American women, you must watch it. These women never became stars like the singers and bands they performed and recorded with, but they often catapulted the music they sang to new levels. In the movie, Merry Clayton, a soul and gospel singer, tells how when she was called to sing backup for the recording of this song late at night, she showed up in her slippers, robe and curlers. After the first take, the Stones told her it was great, but she asked to do another one, thinking to herself that she would blow those boys away—and she did. It’s the song for our current moment. May we all have shelter—from violence, racism, brutality of all sorts, and the virus that plagues us.

Karen Osborn is the author of five novels, Patchwork, a New York Times Notable Book of the Year, Between Earth and Sky, The River Road, Centerville, winner of the Independent Publishers Gold Award, and The Music Book, which is newly published. In reviews, she’s been compared to Ian McEwan, Jodi Picoult, and Russell Banks. The New York Times has called her work, “psychologically sophisticated,” and The Washington Post has said her writing is “an extraordinary effort to engage the American condition as we find it now.” .