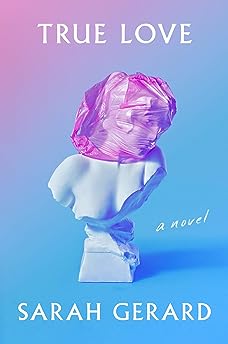 "Gossip, sexual desire, and the uncompromising economics for aspiring artists guide the action in Gerard’s lurid, captivating tale [with] an arresting feminist layer. Gerard’s unflinching look at youthful desperation marks an exciting turn in her work."

In her own words, here is Sarah Gerard's Book Notes music playlist for her novel True Love:

It was very hard to narrow down 100 songs to 14. I began making the playlist for True Love when I began writing the book, at the end of 2016, just after the election of Satan. Each song is an entry point into thinking about different aspects and expressions of love, and the entanglements of love and labor in the working class, especially among artists. How are creative partnerships loving relationships? How is a romantic partnership a creative one? Many of these songs have been significant to me in love throughout the years, and have shaped my understanding of this most elusive phenomenon. True Love's protagonist is Nina, a woman in her twenties who, when the book opens, is planning to move to New York with her boyfriend, to attend graduate school.

The Muffs have been a favorite band since I was in my early twenties, and listening to them always puts me back in that headspace. Their poppy irreverence makes this the perfect anthem for a book about a woman on the cusp of adolescence and adulthood, capturing Nina’s naïveté, charm, anger, and eroticism. Kim Shattuck’s voice is scratchy, scrappy—has been through some shit, and I wanted to channel this quality in the book—while, like The Muffs, maintaining a sense of fun.

Marilyn Manson – Dried Up, Tied and Dead to the World

I hear this song playing under Chapter Two’s backstory, about Nina’s former death drive, and her subsequent stint in rehab, back in her hometown of St. Petersburg, Florida. There, she reunites with a high school classmate, Seth, a painter with whom she begins one of the central relationships of True Love.

This all-female St. Petersburg-based trio released their first album last year, and I appreciate their extreme lo-fi sound and community-organizing / DIY ethos—an important part of the culture of St. Petersburg, and something I wanted to depict in True Love. Broom Closet is friends in a garage, fucking around on their instruments, playing backyard shows. Nina and her friends Odessa and Claudette might be at one of those shows.

“A tisket, a tasket, a green and yellow basket / When will you call?”

Jenny Lewis, The Watson Twins – You Are What You Love

I listened to Rabbit Fur Coat on repeat in my twenties, when I learned the difficult lessons about love and attachment that Nina is learning. It makes me think of my friendships with other women during this period—music has always been a way of connecting in these friendships, and female musicians in particular, and especially Jenny Lewis. Her lyrics are phenomenal, and as a writer, I’m a sucker for a talented lyricist. I imagine Nina as the speaker of this song, addressing Seth. It resonates with her questions around desire and commitment in their relationship.

“I’m fraudulent, a thief at best / A coward who paints a bullshit canvas / Things that will never happen to me.”

Buzzcocks – Why Can’t I Touch It?

It’s challenging to describe love, elusive as it is. What does it taste like, feel like, smell like, look like, sound like? How do we know when we have it? What do we do if we want it badly enough to do the unthinkable, but still can’t find it? In writing True Love, I worked to make Nina’s longing for connection palpable, felt through the senses. I hear Pete Shelley’s wail on “Why-y-y-y-y-y-y” as a cry for physical contact. The song ends on a minutes-long jam of looping twin guitars, resolving into a single voice. This song would appear on a playlist Nina might curate around her relationship with Seth, whose avoidance of intimacy and inability to trust is unbearable to her.

In the first chapter of True Love, Nina describes Seth as listening to Kurt Vile while painting color studies in his sketchbook. Like Vile, Seth is a lanky, longhaired, slow-moving stoner type. Vile’s spacey, low-key, jam-band sounds remind me of beach culture, Florida—their life before they move to New York, and everything changes.

Seth is a fan of David Byrne. He needs to move around his studio, dance as he paints; it’s a physical sport. He’s sweaty, covered in oil paints and turpentine, newspaper ink, and filaments from the rag he uses to wipe his hands. Much of True Love concerns how the stories we tell about our relationships shape them. This dialogue song tells the story of Bob and Judy, who are sick of arguing, and have decided to save their relationship by making their own TV show. So, I also think about Nina’s burgeoning relationship in New York, with a filmmaker named Aaron.

My Bloody Valentine – Blown A Wish

This song is playing over a scene in which Aaron gives Nina an antique book for Christmas. They’re standing outside the bookstore where she works, after closing. It begins to snow. This song’s wobbly pitch, mesmeric sounds, and fuzzy distortion speak to Nina’s hypnotherapist’s wisdom: Love is a trance. “Once in love / I’ll be the death of you,” resonates with a later regret of Nina’s: “I tried to warn him about how I am.”

Joni Mitchell – A Case of You

Nina sends Seth this song as they’re separating, knowing how cruel it is. At the time, she’s dissociating, convinced that she’s not grieving him, but due to vanity, or shame, or denial, she wants him think that she is. She wants the pardon that she thinks this knowledge of Seth’s would grant her, but she wants it at a distance from the feeling that should undergird it. Or maybe she sends him this song because, when she listens to it, it pierces her—in particular the line, “I am a lonely painter / I live in a box of paints.” Nina pictures Seth singing this line it to her the way Joni does, drawing out the O on, “…lo-o-o…nely painter…,” really making her feel the aching need at the center of it—how Seth has gotten under her skin, flows through her body, nourishes and makes her sick, dizzy and drunk and stone sober at the same time—and she blames him for this pain, and wants to punish him for giving it to her, by giving it back to him.

“I remember that time you told me, you said / Love is touching souls / Surely you touched mine.”

Aaron and Nina enjoy singing together. It’s one of the small joys that reminds her of why she loves him: their voices are very compatible. Here is one of their favorite songs. In retrospect, when thinking about it, Nina will reflect upon the myth of Cupid and Psyche. Cupid kidnaps Psyche and keeps her locked in a dark room where, night after night, he rapes her in her sleep, until one night, she becomes pregnant. Desperate to know her attacker’s identity, she hides a lamp in her room, and shines it upon his face. She’s startled to find him beautiful, and accidentally pierces herself on one of his poisoned arrows, which causes her, against her will, to fall in love with the person who’s harmed her. In Sam Cooke’s version, you can hear the whisper of an arrow flying.

“Now, I don’t mean to bother you, but I’m in distress / There’s danger of me losing all of my happiness”

Jackson Browne – Late for the Sky

Nina and Aaron go to the supermarket to buy ingredients for a puttanesca + Taxi Driver Netflix and chill. This song figures prominently in Taxi Driver, a film that tells the story of a combat veteran-turned-taxi driver who falls in love with a woman who doesn’t love him back. Aaron and Nina run into an old college friend, Daniel, at the supermarket—Daniel and Aaron were best friends before they had a falling out; and he and Nina have a sordid past. To impress the woman he loves, or seek revenge, the taxi driver tries to assassinate a presidential candidate. This song tells the story of a breakup. I have listened to it on repeat from the depths of a breakup. Nina listens to it a lot in the months after the election of Donald Trump.

I love the haunting friction between the male and female voices in this song, how they never come together, never disappear into each other, never resolve. The tone captures yearning, fragility, anger, weariness, and strength all at once. The violence and pain and resentment and bruising and brutality of love.

“I want love to change my friends to enemies / And show me how it’s all my fault.”

I imagine Aaron sending this to Nina after the book’s end. There’s a monologue in his voice in the middle; then the narrative becomes an argument between two voices (“Our vision is dissonant”). Nina did keep her name when they married. As the song says, “We were just different” (“What I want from art is truth / what you want is fame”). I wanted to capture the feeling of the frantic crescendo of this piece in the shape of True Love.

“You always hurried to grow up / I think I’ll always just feel kinda the same.”

Bill Callahan – What Comes After Certainty

This is what Nina has been looking for all along. My partner Patty and I married in November of 2019. We played this song at our wedding; we think of it as true love. It’s gentle. It takes its time.

Sarah Gerard is the author of the essay collection Sunshine State, which was longlisted for the PEN/Diamonstein-Spielvogel Award for the Art of the Essay, and the novel Binary Star, which was a finalist for the Los Angeles Times Art Seidenbaum Award for First Fiction. Her short stories, essays, interviews, and criticism have appeared in the New York Times, T Magazine, Granta, The Baffler, Vice, and the anthologies Tampa Noir, We Can’t Help it if We’re From Florida, and One Small Blow Against Encroaching Totalitarianism. She lives in New York City with her true love, the writer Patty Yumi Cottrell. Find her at Sarah-Gerard.com.