Julia Cooke's Playlist for Her Book "Come Fly the World" 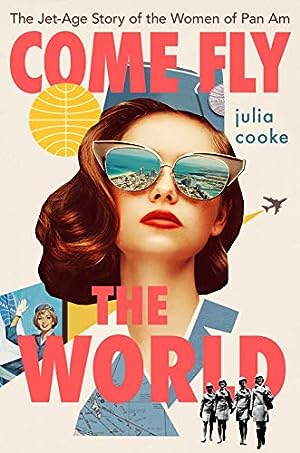 Julia Cooke's compelling book Come Fly the World examines the fascinating role of Pan Am stewardesses during the Vietnam War.

"This engrossing account, which reads like a novel, offers a combination of riveting personal stories and little-known history, and will draw in readers from the first page. A must-read."

In her words, here is Julia Cooke's Book Notes music playlist for her book Come Fly the World:

As a book that’s set in a time period that generated epic music, Come Fly the World to some extent dictated its own playlist. There were songs that I’d listen to just to be surrounded by the sounds that might have played on the radio as the protagonists of my book drove from LAX back to their apartments in Manhattan Beach or Newport Beach — a drive they made at weird hours after a long flight across either the Pacific or the U.S. They’d have been jet-lagged and looking forward to a few days off. And so much of the era’s music, too, stars women openly embracing new freedoms and roles. At the same time, stewardesses feature heavily in a lot of the pop of the late Seventies.

I listened to it all.

Joni Mitchell provided the background soundtrack to the largely white, middle-class late Sixties-early Seventies L.A. that a number of my primary interview subjects participated in. I love the concept of being busy being free: freedom as a state of doing, something to find, something to occupy one’s time.

I was struck, over and over, by how the lyrics of so many Seventies songs emphasize individualism and wandering and choice. And especially women being elusive. Sometimes the lyrics have a sour edge to them, as the women of whom men sing choose something other than doing whatever it is the man singing wishes she would do. But in this song, the “she is only moving on” felt respected to me. Of course, I listened to it more.

I got pretty into the sunshine pop of the Sixties, trying to set a scene for California as it existed in many of these women’s minds as a place that was both home and not-home—they lived there, but were so often elsewhere; for most of them, their families of origin were not here, and for many, when they married, they left. So it was a moment of true independence, or at least a higher degree of self-determination than many women of that era (I mean, or, ever) experienced. This song, to me, was a driving song. I’d imagine cruising on one of the new, oversized SoCal highways, coming from somewhere else, or going somewhere else, with this song in the background.

I’ve always loved Brian Wilson but writing this book kicked my love into borderline obsession. I could listen to this album and the eventual “Smile” record forever, on repeat. Having written about the era is only an excuse for that love, a place for it to sit with some degree of legitimacy.

As the stewardesses I followed were zipping in and out of Los Angeles (sometimes flying to Hawaii) Los Angeles was undergoing serious upheaval via activism in Black and Latino communities. This jazz group came up amid the Black arts renaissance that rose up after the Watts rebellion of the mid-Sixties; I found them via a new book on the activist movements of the era in L.A. Two years before the E.E.O.C. was established, a handful of determined Black women integrated the airlines via lawsuits that put their attractiveness on the stand. It revealed both the open racism and the white beauty standards that ruled on the airlines; not a lot of the latter changed, but the fact was that a not-insignificant number of Black women flew on the airlines from the late 1960s on. They are a remarkable, incredibly illustrious crew who went on to excel in diplomacy, business, academia, and more. I keep waiting for one of them (the Pan Am women of color have, in the past, called themselves “The Blackbirds”) to write a book of their own. Someone should make a documentary about them.

There was a club in Nairobi called the Equator Club. Technically it required black tie but the stewardesses were never turned away; who brought an evening gown? The stewardesses would go out in a group, dance, and then have a tour bus pick them up in the wee hours and drive them out to Nairobi National Park to watch the animals at sunrise. The Kiko Kids were an East African bar band that often played at the Equator Club; there’s not very much of them around anymore, but another song of theirs that’s great is a cover of a Cuban song by Perez Prado. I would give my left arm to go dancing at the Equator Club on a Saturday night in 1967 with the Kiko Kids on stage.

The West has always leveraged this lure of freedom and wildness in the popular imagination to cowboy-wannabe men. But tons of the women I interviewed left families of origin in small towns to head out to California for this amazing job that offered them huge amounts of physical freedom; Karen looked for a place “high in the mountains, where [she] could be free.” The stereotypical gendered appeal fell away for women like them, and in the absence of such stereotypes, the appeal was no less powerful.

Karen, one of the book’s main subjects, used to sit on the cliffs of Santa Barbara in front of the Pacific Ocean and trace the moon’s rivers along the ocean, repeating these lyrics all the while. It is such a romantic image, at once so specific and universal, and it has stuck with me forever: A young woman, convinced that the world would do something to her if she could just get out into it, sitting and humming this song to herself with utter determination, the ocean mist rising up around her in the dark.

There is one woman in particular who I like to imagine sashaying through the Tokyo airport to the rhythm of the sax solo a little before minute three of this song. With this book, I really wanted to break the “sexy stewardess” stereotype. But at the same time, while most of the women I met hated the reputation—indeed they see the term “stew” as derogatory, it was so co-opted by the chauvinists of the early 70s—a few of them also really enjoyed the control over their own sexuality they felt that flying afforded them. One woman once told me about a “game” she used to play: See how many men in first class to Hong Kong via Tokyo she could convince to miss their next connection for a fun night on the town with her and her friends. One time they got five or so. Looking back, as a grown woman, she saw the “game” as a little bit dangerous. But in the moment, she said, it was exhilarating.

One of the book’s main subjects, Lynne, went to the 1969 Vietnam Moratorium in Washington D.C. Amid that crowd of protestors that included children and grandmothers, young men and women, Black and white, a wide economic and social spread of Americans from all over the country, Lynne felt positivity and patriotism as she best understood them to work together. She sincerely believed, for a brief moment, that the force of all of their demands for positive change had been heard and registered — that they had shifted the trajectory of the war and the world. They had not, obviously. And yet participation in that moment had, in a much less dramatic way, changed Lynne.

The rapidity of the change between the late Sixties and the mid Seventies was mind-boggling for me to really compute, the more I read about it and talked to people about it. Some of the stewardesses I followed lived in Hong Kong at the start of open American combat in Vietnam — 1966 — when the aspirational, middle-class courtliness and romance that this song, and indeed the whole Wong Kar Wai movie, relays to me. Nine years later, my primary subjects, Lynne, Karen, and Tori sat in their hotel rooms on the eve of the orphan airlift flight in April of 1975. The American war infrastructure had changed the city in so many ways, and around that, the world had changed, too. To me, this song captures the sense of repression, romance, and portent of the before.

My god, so many examples of stewardesses working their way into the pop culture exclusively for their sex appeal to male rock stars like Iggy Pop. Still, I like this song.

The lyrics to this 1973 song are arguably kind of gobbledygook but there’s a single line that came, to me, to encompass the airline community that these women forged among themselves by the end: “I thought the only lonely place was on the moon.” That’s how they move through the world still, today, in their seventies, visiting one another on standby airline passes and vacationing together. Sometimes their husbands come along but they are very clearly not the point. It is beautiful to watch.

Julia Cooke's essays have been published in A Public Space, Salon, The Threepenny Review, Smithsonian, Tin House, and Virginia Quarterly Review, where she is a contributing editor. Her reporting has been published in Condé Nast Traveler, The New York Times, Playboy, The Village Voice, The Atavist, Saveur, and more. She was a finalist for a 2014 Livingston Award in International Reporting for her profile of a young Cuban sex worker; her article about the blossoming of architecture and design in Havana won a 2016 New York Press Club Award. Her work has been anthologized in Best American Travel Writing 2014, Best Women's Travel Writing (Volume 9), One World, Many Cultures (10th edition), and noted in Best American Essays 2016 and Best American Travel Writing 2017.