Scott Gould's Playlist for His Memoir "Things That Crash, Things That Fly" 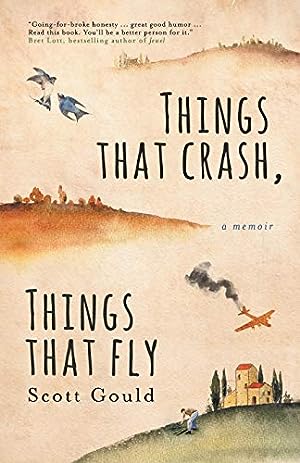 Scott Gould's Things That Crash, Things That Fly is innovatively told, heartbreaking, and infused with black humor, one of the most moving divorce memoirs I have ever read.

David Shields wrote of the book:

"Picasso said, 'Every act of creation begins with an act of destruction.' Edmund Wilson called this the wound and the bow. Another way to say this is there are no thrills without catastrophes. Alas. As Scott Gould's brilliantly titled memoir indicates, this is the very territory of this book: the relationship between the blast-radius and transcendence. In a curious sense, they are synonymous. No crashes; no flights. With truly impressive distance and irony, Gould takes his own set of tragic circumstances and turns them into nothing less than an allegory of the cost of being fully human and vulnerable. An extraordinary work."

In his words, here is Scott Gould's Book Notes music playlist for his memoir Things That Crash, Things That Fly:

This is the third playlist I’ve done for Largehearted Boy. For the other two books (a story collection, Strangers to Temptation, and a novel, Whereabouts) I looked forward to the trips down musical rabbit holes. All of the songs on the previous playlist were ones I loved, tunes mentioned directly in the works or suggested by the books’ settings or time frames or themes.

But this playlist has a different vibe. Because I truly hate some of these songs.

This book, a memoir titled Things That Crash, Things That Fly (Vine Leaves Press) is about the evaporation of a marriage and the aftershocks of that heart-stomping process. It’s about a bunch of other stuff too: daughters and fathers, too much Lortab, a pierced penis (not mine), Italian sandals, bad knees (definitely mine), lost love. But for the most part, Things That Crash, Things That Fly is about a chunk of my life that wasn’t all that sunny. But hey, the darker parts of the day deserve a soundtrack too, right?

Act One: Annoying Pop Songs While Driving Around Italy

Things That Crash, Things That Fly (hereafter known as TTC,TTF because I’m tired of typing the whole title) centers around several trips to Italy. (Note: I’m not rich. These were trips that we couldn’t afford and probably shouldn’t have taken, or in one case, were paid for by a teaching fellowship.) During the solo, fellowship trip following my divorce, I spent a lot of time driving up and down the mountains near Serra, Italy, listening to the only FM station I could pick up on the radio in the cheap rental car. The summer I was there—in 2006—two songs were incessant, persistent ear worms. I disliked both of them for a couple of reasons: 1) they were silly songs, and 2) they were soundtracks to the unhappiness of the moment. To this day, they drag bad memories on their coattails. But there was one redeeming quality—it was fun listening to Italian DJs try to pronounce “Gnarls Barkley” or say “heeps dona lieee.”

In Italy in 2006, it felt like this was every third song on the radio.

My wife left, and our daughters began to spend stretches of time at her new place, so I often found myself alone in a big, echoey, rambling house. I spent most of those evenings drinking tall boy PBRs and listening to music. At that time, I had a Sony CD player hooked to the receiver, one of those models with a tray that popped out, and you could load up to five CDs. For some reason, I never filled the fifth slot. One night, no doubt fueled by cheap beer, I realized how completely sad the music was making me feel. It shouldn’t have been a surprise. I had been listening to the same four CDs for weeks and weeks, looping over and over, the same quartet of sad sons of bitches singing to me about their own misfortunes and weaknesses. Me and the four sad boys were suddenly in some kind of musical lonely hearts club. Why I didn’t change the selections in the tray, I can’t say. As I note in TTC, TTF, I wasn’t thinking real clearly at times. Nowadays, these CDs are on my banned-for-health-reasons list. Here’s an apropos cut from each one:

“If You Want Blood” by Mark Kozelek

You might know Kozelek from his bands, Red House Painters and Sun Kil Moon. But the CD in my tray was his 2001 solo record, What’s Next to the Moon, where he does acoustic, bluesy, drastically altered covers of Bon Scott AC/DC songs. This selection carved out a special, PBR-soaked place in my brain during those days.

I mean, he called his 2004 album Trouble, which should tell you something. There’s always a Happy Ray and a Sad Ray. (Hint: if you hear horns, Happy Ray will appear.) In this cut, there ain’t no horns. This tune brings sadness with a jagged edge.

Not a whole lot of happy on Rice’s 2002 album, O. This opening cut features his breathy confessional that builds into full-fledged yelp: “Why’d you fill my sorrows/With the words you’ve borrowed?” A real sing-along.

“I Didn’t Understand” by Elliott Smith

Read Smith’s bio and you’ll see what a talented yet troubled soul he was, and his troubles consistently reared their head in his music, like on 1998’s XO. Hearing lines night after night like “I always feel like shit/I don’t know why, I just guess I do” was probably not the healthiest audio for any of us.

Act Three: Happier Times and Songs I Still Love No Matter What

My ex-wife and I were somewhat obsessed, definitely unabashed Lyle Lovett fans. We saw him live too many times to count. The last concert was only days before she moved out. (There’s a chapter about that show in TTC,TTF.) Lovett might be one of the best wordsmiths I’ve ever read. (I mean, he rhymes “fly swatter” with “ice water.”) And his long discography spans the length of our marriage with eight albums, from 1986 to 2003. I’ve picked a single cut from each of those albums, listed chronologically, and when I first wrote them down, I’d planned to make a comment about each song. Then I looked at the titles and it seemed to me they told a story all by themselves, almost like a found poem. (Note to you and to self: To make this Lyle Lovett playlist, I re-listened to all these songs—so chock-full of memory and sadness—and I found myself smiling. I guess that means I’m doing okay these days.)

“If I Were the Man You Wanted” from Lyle Lovett

“Give Back My Heart” from Pontiac

“I’ve Got the Blues” from I Love Everybody

“It Ought to be Easier” from The Road to Ensenada

“Closing Time” from Lyle Lovett…because this is the song you play when it’s all said and done.

Scott Gould is the author of the story collection, Strangers to Temptation (Hub City Press), and the novels, Whereabouts (Koehler Books) and The Hammerhead Chronicles (University of North Georgia Press). His work has appeared in Kenyon Review, Black Warrior Review, New Ohio Review, Crazyhorse, Carolina Quarterly, New Stories from the South and others. He is a multiple winner of the Individual Artist Fellowship in Prose from the South Carolina Arts Commission, as well as the Fiction Fellowship from the South Carolina Academy of Authors. He lives in Sans Souci, South Carolina. More information is available at scottgouldwriter.com.